Meet the Asaro Mud Men, an Indigenous Group That Wins Battles Through the Power of Human Imagination 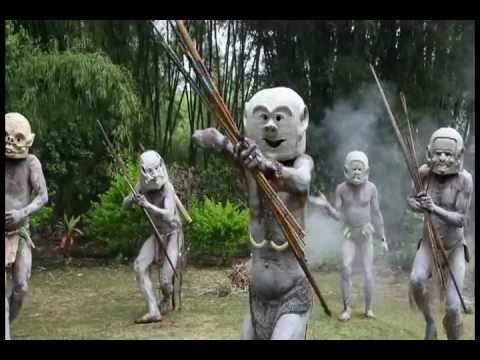 Asaro mud men, also known as Holosa, are an indigenous group from Goroka village in Papua New Guinea. These men are popularly known for using the fear of ghosts to win battles.  They do this by “turning” themselves into spirits before attacking the enemies.

Asaro mud men live on the banks of River Asaro, home to the fertile Markham and Ramu valleys. The highlander tribes are ever fighting to control these valleys and other gold funds in the area. The Asaro mud men have discovered the secret of scaring away the enemies.  They wear specially designed traditional costumes and masks made from mud.

Ghosts are a highly feared phenomenon in this highland. Often inhabitants here offer sacrifices to appease the gods. They believe that the gods live in the rainforest, rivers, and caves surrounding the area.

Over the years, the Asaro mud men have taken advantage of their enemies’ fear of ghosts to win battles. They put on masks made out of mud and paint themselves with white clay. The Asaro’s then move slowly and gracefully towards the enemy.

Through this tactic, Asaro’s mud men have ruled Markham and Ramu valleys for decades.

There are several versions of the Asaro mud men origin. One version of the story claims that Asaro’s mud men ideology began when they were attacked by a stronger enemy tribe and were about to lose the battle. Just about that moment, an older man from their village had a dream in which he saw a terrifying gray spirit.

Waking up, he made a mask out of mud resembling the vision he had seen in the dream. When the Asaro warriors wore the mask made out of mud, the enemies fled, never to return. From this moment, the mud mask ideology became engraved in Asaro’s tribe.

The second version of the story tells that the Asaro mud men ideology started when one of the Asaro’s married. Everyone in the event wore a traditional costume apart from one guest who could not find a traditional wedding costume.

An idea struck his mind, and he decided to use an old string bag as his costume. He cut two holes for his eyes and dipped the bag in mud. He also covered his skin with dirt. Arriving at the wedding, everyone thought he was a ghost and fled.

It was from this that the man derived the idea of scoring a victory in war.

Another citation claims that this tradition started after the Asaro mud men fled to the Asaro River after being defeated by an enemy tribe.  At the river, they met a man who gave them eyes to kill. The Asaro mud men then waited till dusk to escape. The man who was given the eyes to kill was captured as they did this, and the enemies saw him rise from the muddy banks.

He was covered in mud which made them think he was a spirit, and ran away, giving the Asaro man a chance to flee. The Asaro’s returned to the village and found the terrified enemies, performing rituals to chase away the “spirits.”

Right there, this indigenous group discovered a new tactic to win over their enemies. There was, however, a problem. The Asaro’s could not use the mud from the river to cover their faces as it was considered poisonous. There and then, they opted to make masks using heated pebbles and water.

There is no single version of the origin of the Asaro mud men ideology. Nonetheless,this tactic has helped this indigenous group in many ways. Besides conquering the fertile land for decades, the Asaro’s are a major tourist attraction in Papua New Guinea.