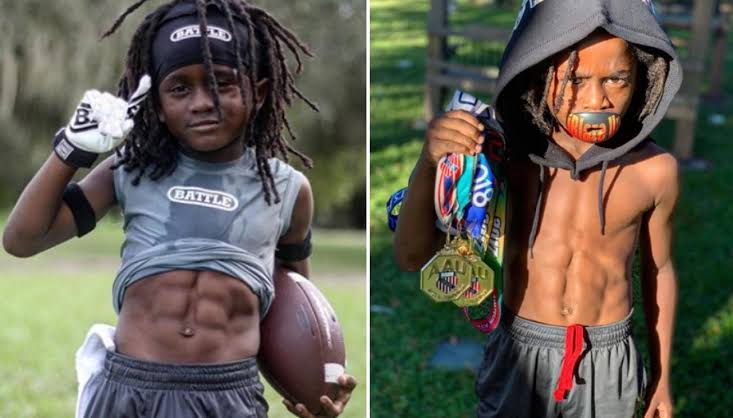 Dread locked hair, steel Abs and dreamy eyed, this eight year old is one that would leave you wondering in awe with your mouth agape especially when you see his abs of steel. Rudolph Ingram who is also referred to as “Blaze” due to his speed is an amazing 8 year old.

Also referred to as the fastest kid in the world,
Blaze first made headlines in 2018 when NBA superstar LeBron James posted a video of him exploding through defenders in a local little league game of American football.

His father says he admires Rudolph for not only the type of player his son is, but also the character he displays, he told Youth 1 publication in the US.

“I’m overly proud of him as a father, trainer and coach not only because he does extremely well but because it’s what they don’t see,” Ingram senior said. “He works hard, he’s so respectful, always keeps a smile on his face and accepts the limelight so humbly. His future is so bright. I’m just in awe  to be a part of it.”

Rudolph Ingram who is said to have developed his amazing abs since he was 5 years old, has been called “the next Usain Bolt,” and it may not be hyperbole. He has a growing Instagram following that has topped Over 500k followers.

Blaze says he “loves running real fast”. The six-pack-flaunting youngster has been competing in races since 2016. Rudolph Ingram has won several medals and admits that his favourite part about running is that “you get medals”.

Blaze previously said: ‘I work hard at practice to set the bar high for my teammates. I want to show them we need to give it all we’ve got. If they don’t know how to do something, I show them how to do it. I always tell them “You practice how you play”.’

Although at the moment the eight year old runner says his goals are to play American football, we’ll be watching out for him on the track in the future.