Meet Tonya McCray and Racquel McCray , the Mom and Daughter Who Are Working Together on the Same U.S. Navy Ship

25-year old Racquel McCray and her mother, Tonya McCray, are currently serving on the same U.S. Navy ship together. Growing up, Racquel has always admired her mother and father who were both successful in the Navy. She was 18-years old when she decided to follow in their footsteps and join the Navy as well.

“I chose to join because I watched my parents for my entire life,” Racquel told Good Morning America. “They both served, so watching them every day go to work made me actually want to follow in their footsteps, with how successful they were and what they were able to provide for my sister and I.”

However, Tonya said that at first, she can’t believe it when her daughter wanted to join the Navy. But eventually, she realized how dedicated she was which made her so supportive and so proud of her.

According to BlackNews, Most recently, Racquel enrolled in the same logistics specialty as her mother. And when she found out about the opportunity to watch her mother in action and work alongside her, she immediately took it. She and her mother then reached out to each of their chain of command for approval. 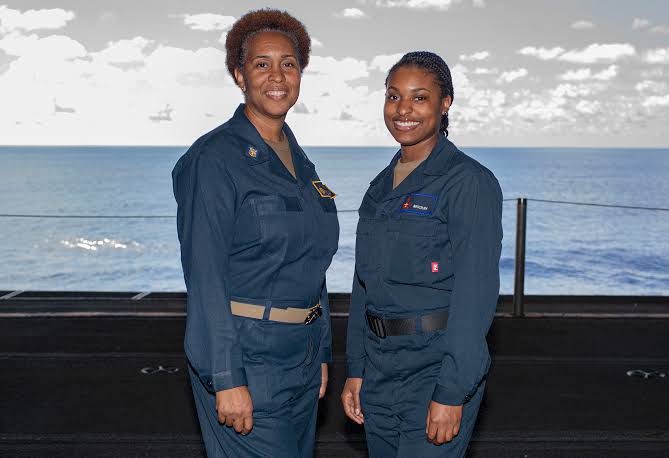 For 4 weeks, Racquel had the rare opportunity to work with her mother on the same ship, the USS Gerald R. Ford. The mother and daughter duo both enjoyed the experience even though rather short.

“I was able to share what I did with my daughter every day,” Tonya said. “She saw what respect that someone of my pay grade gets on a day to day, how they look up to me, and it just felt great to be able to share that experience with her, and also, just to see her hard work.”

“It was a great experience for me, even though it only lasted four weeks,” Racquel McCray said. “I would have liked for it to be a little bit longer, but it was really nice to be able to see the benefits of all of [my mom’s] hard work, how people looked up to her and respected her.”