Rihanna has reigned over the Met Gala red carpet for a decade now; captivating the fashion crowd with everything from her game-changing androgynous take on black tie dressing in 2009; to last year’s sculptural floral Commes des Garçons masterpiece. This year, the Metropolitan Museum of Art’s Costume Institute has officially recognized her as their queen by bestowing RiRi with the honor of co-chair for the event; which is themed “Heavenly Bodies: Fashion and the Catholic Imagination,”; alongside fellow fashion icons Donatella Versace and Amal Clooney.

Having wowed us in the past with her jaw-dropping looks as an attendee; we can only imagine how the “Work” singer will slay the theme in her new role this year. To amp up the Anticipation, we’ve rounded up a comprehensive guide to all of Rihanna’s stunning style moments; since the very first time she graced the carpet back in 2007. 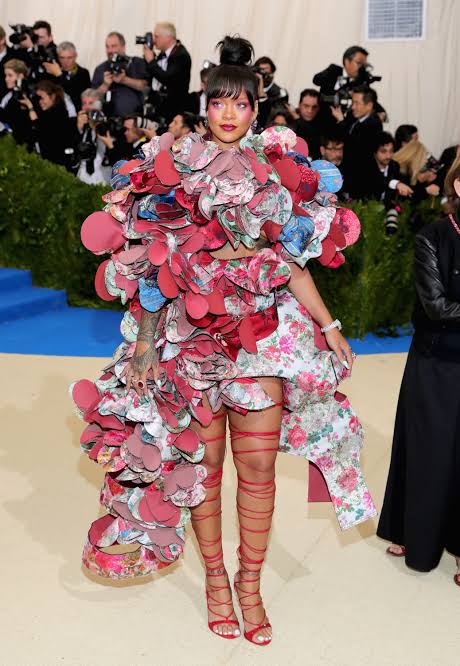 A decade after her Met Gala debut, Rihanna’s bold 2017 look — a dress from the Comme des Garçons Fall 2016 RTW runway paired with strappy red sandals; was one of the most memorable looks of the night. The wearable work of art balanced architecture with whimsy, and featured a floral base print; 3D petal-like embellishments blooming in shades of pink around her torso and down the side as well as two sculptural pieces on either side that gave the illusion of a full skirt.

With her Fenty Beauty line set to release later that fall, the then-budding beauty mogul made sure her makeup was equally statement-making; pulling colors from her dress to create a sharply defined deep-pink pout and metallic pink blush that swept from her brown bones to cheek bones. To (literally) top off the look, she swept her hair into a messy-chic topknot that she balanced with fringy bangs.

And while the avant garde ensemble may look impossibly difficult to wear; let alone get into — the star told Vogue‘s André Leon Talley, “It’s actually really easy, it’s booty shorts and you buckle some snaps.” The ultra-strappy sandals were another story; “The shoes took me an hour to get into,” she admitted.

Rihanna 2015: China: Through the Looking Glass 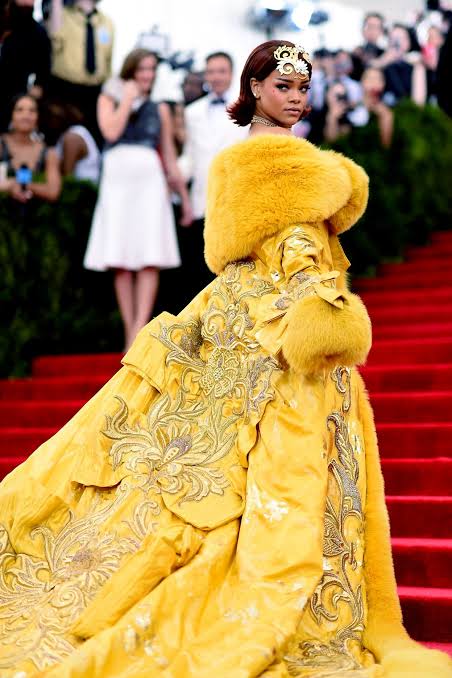 If it weren’t for Rihanna’s fashion intuition, this iconic style moment might never have happened. “I actually didn’t think the dress was the right one for her,” the dress’s designer, Chinese couturier Guo Pei, confessed to Women’s Wear Daily. “I thought it would be too heavy and too hot, but she was so touched the moment she put it on.”

The intricately embroidered canary-yellow dress and coordinating massive fur-trim cape were fittingly inspired by the look of a queen, the designer told Elle. The ensemble took Guo Pei 20 months to craft, and weighed a staggering 55 lbs., according to Fashionista. So it’s no wonder it practically shut down the red carpet, as RiRi’s train spanned almost the entire length of the Met steps and required the assistance of three people to help her make her way to the top; which she eventually managed to do, in T-strap Christian Louboutin fall ’15 “Toerless Muse” heels, no less.

As if the gown-cape combo wasn’t extravagant enough, RiRi crowned her look with a vine-like gold headpiece that swirled down onto her forehead. Ruby-colored stones and other jewels embellished the statement piece; which mimicked the shape of the cape’s embroidery. Although her jewelry was over-the-top as well (she also wore a multi-strand beaded gold choker and a diamond ear cuff), Rihanna kept her makeup to a minimum with winged black eyeliner, matte nude lipstick and stick-straight brows. 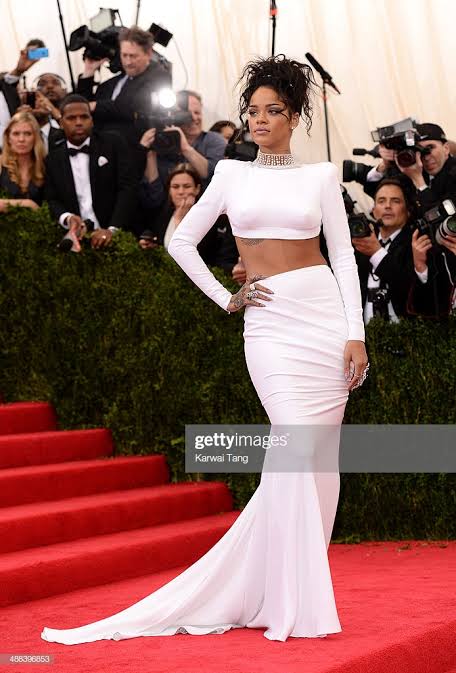 Crop tops don’t exactly come to mind when you think of the Met Gala, but leave it to RiRi to make the style work, work, work (you know where we’re going with this). The singer was white hot on the 2014 red carpet in a head-turning Stella McCartney two-piece gown that showed off her hard-earned abs and a glimpse of the wing tattoo on her ribs. The ensemble was almost entirely backless, held together by a small clasp at the base of her neck. While this was RiRi’s second time rocking a Stella McCartney design at the event; it was a departure from the more traditional gala-attire that she wore in 2011 (see below), and proved yet again that she’s ahead of the curve when it comes to Met fashion.

The look was stunning yet simple, and she added tons of jewels to stand out, including Jacob & Co. four-carat diamond studs and a 18k white-gold diamond choker. She also added two 18K white gold rings from Dionea Orcini set with rare tanzanites and framed with diamonds, as well as Cartier’s signature white diamond “Panthère” ring. To balance things out, she made sure her left hand sparkled with two rings by Lebanese jeweler Yeprem.

The star kept her makeup soft for the occasion; with frosty pink lips, highlighter on her brow bone and classic winged eyeliner. Wispy tendrils curled down from her undone updo, which was held together by a delicate sparkly headband.

In 2012, Rihanna stole the show once again in this sultry Tom Ford crocodile-embossed leather dress. The form-fitting floor-length gown featured a sexy slit and a deep-V back that showed off her neck tattoo. She kept the rest of her look relatively minimal; with dark talon nails and pointy-toe black patent Christian Louboutin pumps. She also showed off an undercut, with an updo featuring three buns. 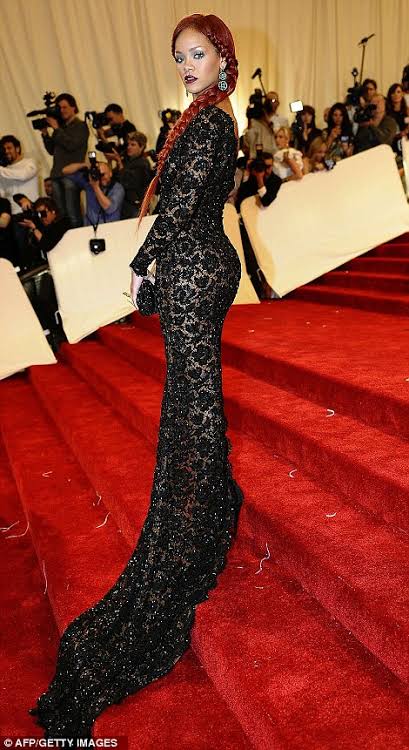 Dressed in a black bead-and-lace peekaboo Stella McCartney number with a built-in shimmering nude slip, the star made a bold statement with her red Rapunzel-esque braid. She paired the elegant yet edgy look with a beaded black clutch, strappy black stilettos (by her go-to, Christian Louboutin) and Wilfredo Rosado dangling emerald earrings. Rihanna rocked a crimson red lip to match her dramatic braid and left her eyebrows natural, although she appeared to tint them to match her vibrant hair color for the evening. 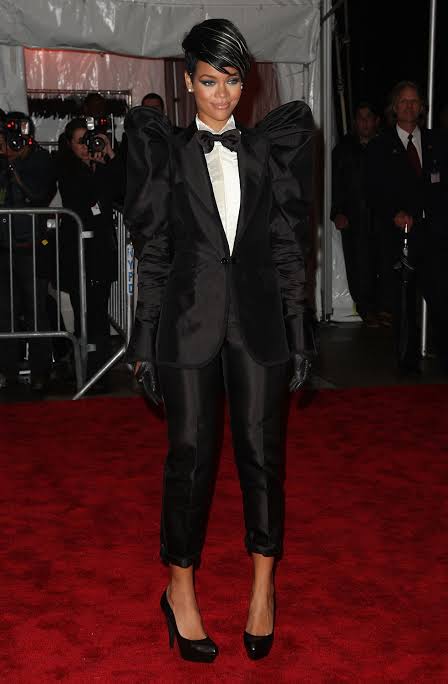 Is there any look that doesn’t suit her? RiRi raised the bar at the 2009 gala, hitting the carpet in a tailored black Dolce & Gabbana tuxedo with dramatic, puffed-up shoulders that nearly reached her ears. She accented the shiny look with a black bow tie, black Jil Sander pumps and black leather gloves, but otherwise let the style speak for itself. Beauty-wise, the star went with vibrant blue winged eyeshadow and blonde highlights in her side-swept short do. 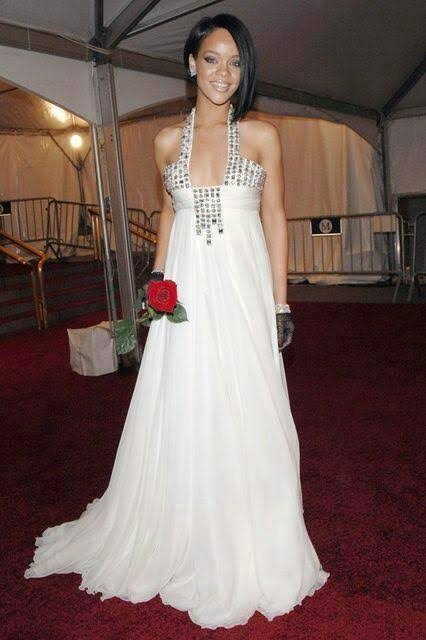 Oh, how far the bad gal has come. After topping the charts with her iconic single “Umbrella,” (ella, ella … sorry, we had to) Rihanna’s career skyrocketed, landing the star her first coveted invite to the Met Gala. She chose an ethereal white Georges Chakra halter gown embellished with crystals. Even then, she kept her look edgy by adding a pair of black fishnet gloves, and topped it off with a sleek asymmetrical bob haircut.