“No One Can Force Me To Leave Presidency”: Anti President Protests In The Gambia, Leads To Death Of Three Protesters In 2016, President Barrow became the leader of a coalition In The Gambia; which was formed after the then government’s security forces detained and killed members of the opposition United Democratic Party (UDP). Barrow went on to defeat former President Yahya Jammeh in the December national election that same year and was sworn into office the following year.

A Memorandum of Understanding (MOU) released by the coalition stated that should Barrow win the election, he would only serve three years as a transitional president. And then go on to organize elections in which he himself would not run.

In recent times, President Barrow has backtracked on that commitment and confirmed that he will serve his full five-year tenure saying, “No one can force me to leave the presidency before 2021.” Having also left the coalition that saw him winning the 2016 election, it appears he is no longer bound by its MOA. Additionally, the country’s constitution supports any democratically-elected president serving the full five-year term.

As a result, angry citizens of The Gambia started the “Three Years Jotna” movement. Which translates to “three years is enough” and demands that Barrow resign.

However, the Ongoing anti-government protests in The Gambia have turned deadly. Aljazeera reports that this past Sunday, three protesters were killed; while protesting for President Adama Barrow to resign. These are the first reported deaths since the protests began a few months ago.

Furthermore, Several other protesters were injured after the police fired tear gas and rubber bullets. In an attempt to disperse the massive crowds.

Protesters Would Not Rest

Several protesters at the demonstration on Sunday told AFP that, “We will protest until Barrow resigns. He is a traitor who betrayed the population’s trust, we are going to teach him a lesson.” 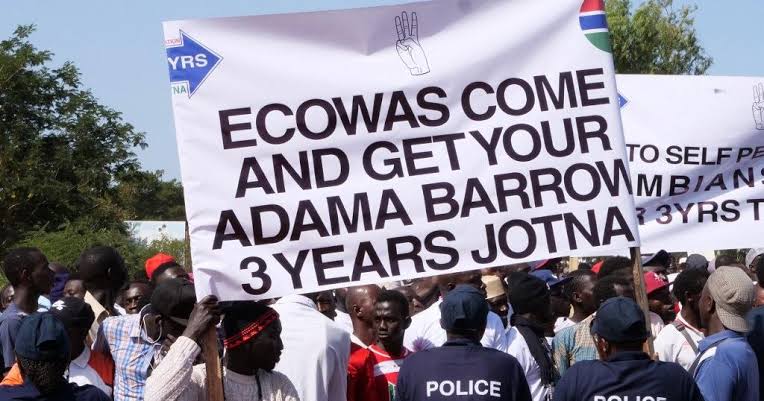 “We are moving from high hopes to a let-down,” political scientist Ismaila Ceesey, told DW. “Things have really turned bad. I think the height of this was manifested yesterday [Sunday].”

Ceesay, a lecturer at the University of The Gambia, said that police actions against peaceful protesters exacerbated tensions which were not about to calm down. He pointed out that The Gambia is a very young country.

Therefore, there are now renewed calls by supporters of Jammeh for him to return to the country. However, the current government have made it clear that Jammeh will be arrested upon his arrival in the country following numerous charges levelled against him by The Gambia Truth, Reconciliation, and Reparations Commission.