Outpour of support for Sha’carri Richardson as the sprinter issues apology after drug ban. 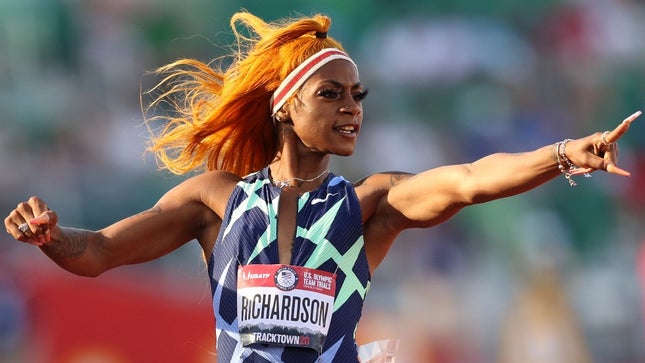 Share
Facebook Twitter LinkedIn Pinterest Email
First, we wish to show our unending support for an Exceptional Black Girl, and Yes! She’s all that! Next, we bring you the News update.
Sha’carri Richardson, 21-year-old US sprinter, who stunned the planet with a record breaking performance, after winning her 100-meter heat and securing a coveted spot as a part of the U.S women’s team for next month’s Tokyo Olympics; has recently been barred from competing within the 100-meter race at the Tokyo Olympics, after testing positive for cannabis.
During an interview on NBC’s Today show, Sha’Carri took full responsibility for her actions, while also revealing that she was in “a state of emotional panic” and “blinded by sadness” after a “complete stranger” — a reporter — broke the news of her mother’s death to her.
Richardson told “Today” host Savannah Guthrie that she used the drug after a reporter confronted her with news of her birth mother’s death, but said she wasn’t trying to seek out sympathy.
“I know what I did, i do know what I’m supposed to do, what I’m allowed to not do.  which i still made that decision ,” Richardson said Friday morning.
Richardson shared that at that point , she was in oregon where recreational marijuana use has been legal since 2015.
Several renowned celebrities, activists , members of Congress, Olympic gold medalists, and more, have taken to many Social Media Platforms to show their support for Sha’Carri. they expressed their concerns, and stressed that there be more interest within the psychological state of athletes, and a greater need for a change in “archaic” rules regarding marijuana. See responses below.
https://twitter.com/RepBowman/status/1410967903881531402?s=09
https://twitter.com/CoryBooker/status/1411025327602679814?s=19
https://twitter.com/HayesBrown/status/1411024245581398025?s=19
https://twitter.com/GeoffRBennett/status/1411044978806169611?s=19
Share. Facebook Twitter Pinterest LinkedIn Tumblr Telegram Email
admin