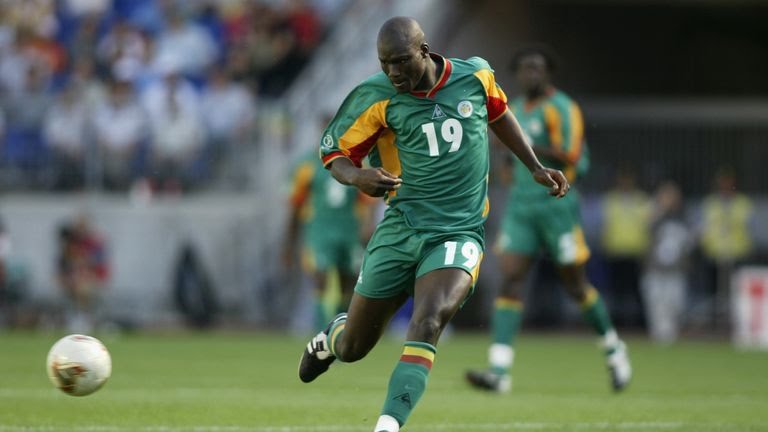 FIFA confirmed the death of the midfielder, saying: “FIFA is saddened to learn of the passing of Senegal legend Papa Bouba Diop. Once a World Cup hero, always a World Cup hero.” 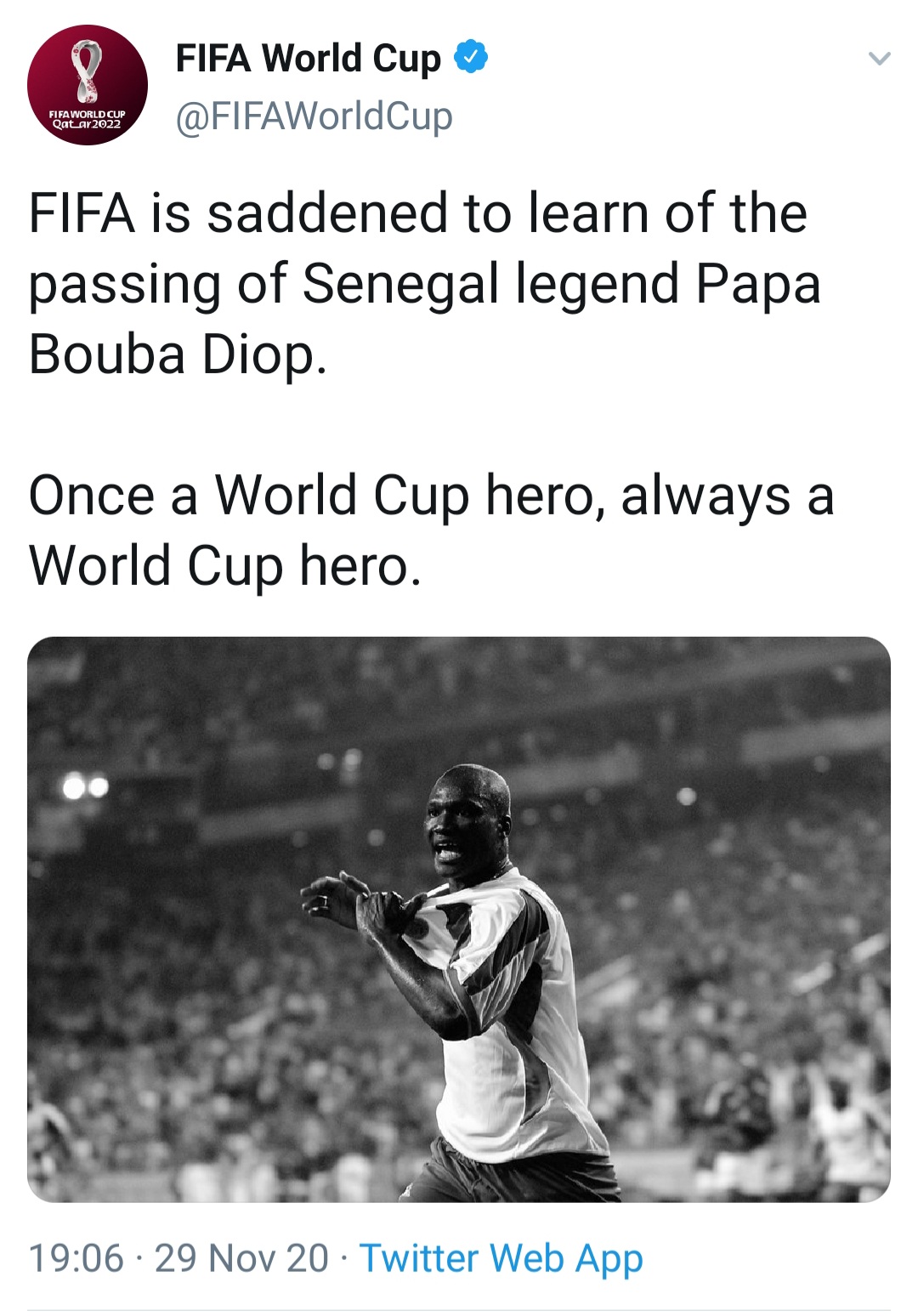 “I pay tribute to a good footballer, respected by all for his courtesy and his talent, proudly reminding us of the Lions saga in 2002. I offer my heartfelt condolences to his family and to the football world.”

Senegal international and Liverpool star, Sadio Mane wrote on Instagram: “Pape Bouba, it was with a broken heart that we learned of your (death). Know that you will forever remain in our hearts even if you left without saying goodbye to us.”

Former French club Lens, said it learned the news with “great sadness” and offered condolences to his family, while West London side Fulham, another former club, said they were “devastated” to hear of his death.

In the 2002 World Cup, Diop scored two more goals in Senegal’s 3-3 draw with Uruguay in the group stage to become their top scorer at the tournament as they went on to reach the quarter-finals. In all, the versatile defensive midfielder made 63 appearances for his country scoring 11 goals.

Diop joined Portsmouth from Fulham and was part of their 2008 FA Cup-winning side. Their manager at the time, Harry Redknapp, told Sky Sports News that he was an “absolutely fantastic character”.

“I never heard a bad word for anybody out of his mouth. Everyone just loved him.

“I looked like signing him at Portsmouth and then I lost him, he ended up going to Fulham.”

“I went to watch him at Fulham a few times and he was such a good player, strong and powerful and could pass it, and he played in that Senegal team that beat France at the World Cup. 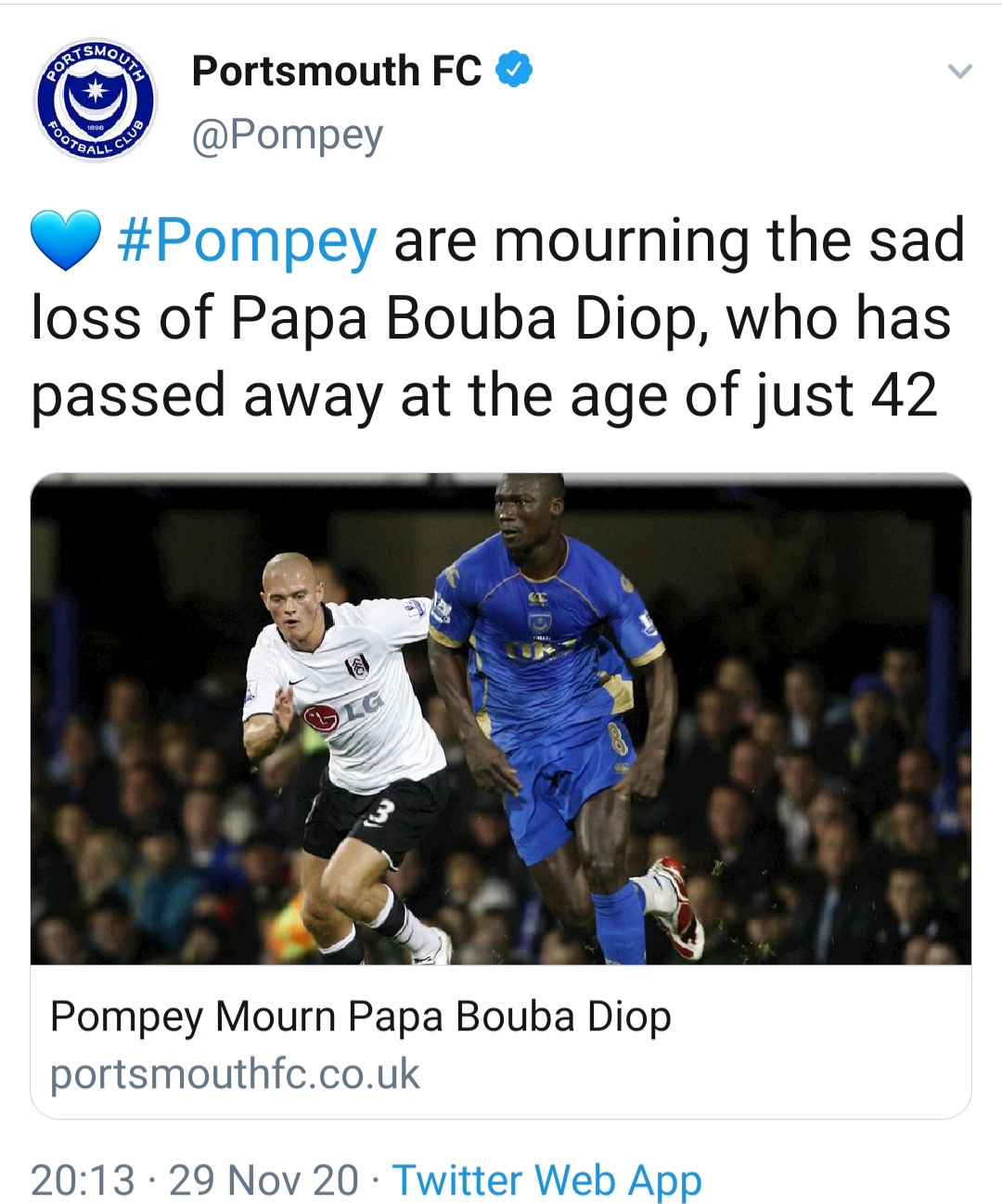 “Then eventually I got him to Portsmouth and he was so influential in what we achieved. He was a top player and a top person, always smiling, always laughing. He was just lovely to have around and I’m really upset to hear this news. He really was a special character.”

Diop went on to play for West Ham after leaving Porstmouth – via a brief spell in Greece with AEK Athens – and the club said: “Everyone at West Ham United is saddened to learn of the passing of Papa Bouba Diop at just 42.

“A part of our 2011/12 promotion-winning squad, he’ll always be a part of our club. Our thoughts are with his family at this time. Rest in peace, Papa.”

Diop was reported to have had Charcot-Marie-Tooth disease, according to British media reports.