Part 2: Hasseeboo, The Physician’s Son And The King Of Snakes; A Tanzanian Folk Tale 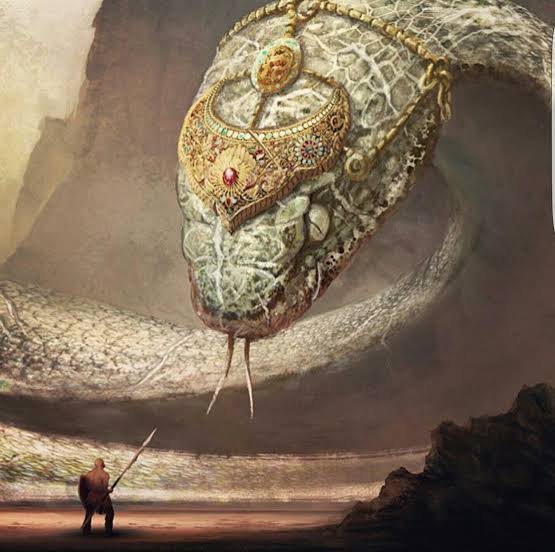 “‘When we got there he produced a camel’s skin, and said, “I shall put you in this skin, and a great bird will carry you to the top of yonder mountain. When he gets you there, he will tear this skin off you. You must then drive him away and push down the precious stones you will find there. When they are all down, I will get you down.”

“‘So he put me in the skin; the bird carried me to the top of the mountain and was about to eat me, when I jumped up, scared him away, and then pushed down many precious stones. Then I called out to the man to take me down, but he never answered me, and went away.

“‘I gave myself up for a dead man, but went wandering about, until at last, after passing many days in a great forest, I came to a house, all by itself; the old man who lived in it gave me food and drink, and I was revived.

“‘I remained there a long time, and that old man loved me as if I were his own son.

“‘One day he went away, and giving me the keys, told me I could open the door of every room except one which he pointed out to me.

“‘Of course, when he was gone, this was the first door I opened. I saw a large garden, through which a stream flowed. Just then three birds came and alighted by the side of the stream. Immediately they changed to three most beautiful women. When they had finished bathing, they put on their clothes, and, as I stood watching them, they changed into birds again and flew away.

“‘I locked the door, and went away; but my appetite was gone, and I wandered about aimlessly. When the old man came back, he saw there was something wrong with me, and asked me what was the matter. Then I told him I had seen those beautiful maidens, that I loved one of them very much, and that if I could not marry her I should die.

“‘The old man told me I could not possibly have my wish. He said the three lovely beings were the daughters of the sultan of the genii, and that their home was a journey of three years from where we then were.

“‘I told him I couldn’t help that. He must get her for my wife, or I should die. At last he said, “Well, wait till they come again, then hide yourself and steal the clothes of the one you love so dearly.”

“‘So I waited, and when they came again I stole the clothes of the youngest, whose name was Sayadaa′tee Shems.

“‘When they came out of the water, this one could not find her clothes. Then I stepped forward and said, “I have them.” “Ah,” she begged, “give them to me, their owner; I want to go away.” But I said to her, “I love you very much. I want to marry you.” “I want to go to my father,” she replied. “You cannot go,” said I.

“‘Then her sisters flew away, and I took her into the house, where the old man married us. He told me not to give her those clothes I had taken, but to hide them; because if she ever got them she would fly away to her old home. So I dug a hole in the ground and buried them.

“‘But one day, when I was away from home, she dug them up and put them on; then, saying to the slave I had given her for an attendant, “When your master returns tell him I have gone home; if he really loves me he will follow me,” she flew away.

“‘When I came home they told me this, and I wandered, searching for her, many years. At last I came to a town where one asked me, “Who are you?” and I answered, “I am Jan Shah.” “What was your father’s name?” “Taaeeghamus.” “Are you the man who married our mistress?” “Who is your mistress?” “Sayadaatee Shems.” “I am he!” I cried with delight.

“‘They took me to their mistress, and she brought me to her father and told him I was her husband; and everybody was happy.

“‘Then we thought we should like to visit our old home, and her father’s genii carried us there in three days. We stayed there a year and then returned, but in a short time my wife died. Her father tried to comfort me, and wanted me to marry another of his daughters, but I refused to be comforted, and have mourned to this day. That is my story.’

“Then Bolookeea went on his way, and wandered till he died.”

Next Sultaanee Waa Neeoka said to Hasseeboo, “Now, when you go home you will do me injury.”

Hasseeboo was very indignant at the idea, and said, “I could not be induced to do you an injury. Pray, send me home.”

“I will send you home,” said the king; “but I am sure that you will come back and kill me.”

“Why, I dare not be so ungrateful,” exclaimed Hasseeboo. “I swear I could not hurt you.”

“Well,” said the king of the snakes, “bear this in mind: when you go home, do not go to bathe where there are many people.”

And he said, “I will remember.” So the king sent him home, and he went to his mother’s house, and she was overjoyed to find that he was not dead.

Now, the sultan of the town was very sick; and it was decided that the only thing that could cure him would be to kill the king of the snakes, boil him, and give the soup to the sultan.

For a reason known only to himself, the vizir had placed men at the public baths with this instruction: “If any one who comes to bathe here has a mark on his stomach, seize him and bring him to me.”

When Hasseeboo had been home three days he forgot the warning of Sultaanee Waa Neeoka, and went to bathe with the other people. All of a sudden he was seized by some soldiers, and brought before the vizir, who said, “Take us to the home of the king of the snakes.”

“I don’t know where it is,” said Hasseeboo.

“Tie him up,” commanded the vizir.

So they tied him up and beat him until his back was all raw, and being unable to stand the pain he cried, “Let up! I will show you the place.”

So he led them to the house of the king of the snakes, who, when he saw him, said, “Didn’t I tell you you would come back to kill me?”

“How could I help it?” cried Hasseeboo. “Look at my back!”

“Who has beaten you so dreadfully?” asked the king.

“Then there’s no hope for me. But you must carry me yourself.”

As they went along, the king said to Hasseeboo, “When we get to your town I shall be killed and cooked. The first skimming the vizir will offer to you, but don’t you drink it; put it in a bottle and keep it. The second skimming you must drink, and you will become a great physician. The third skimming is the medicine that will cure your sultan. When the vizir asks you if you drank that first skimming say, ‘I did.’ Then produce the bottle containing the first, and say, ‘This is the second, and it is for you.’ The vizir will take it, and as soon as he drinks it he will die, and both of us will have our revenge.”

Everything happened as the king had said. The vizir died, the sultan recovered, and Hasseeboo was loved by all as a great physician.