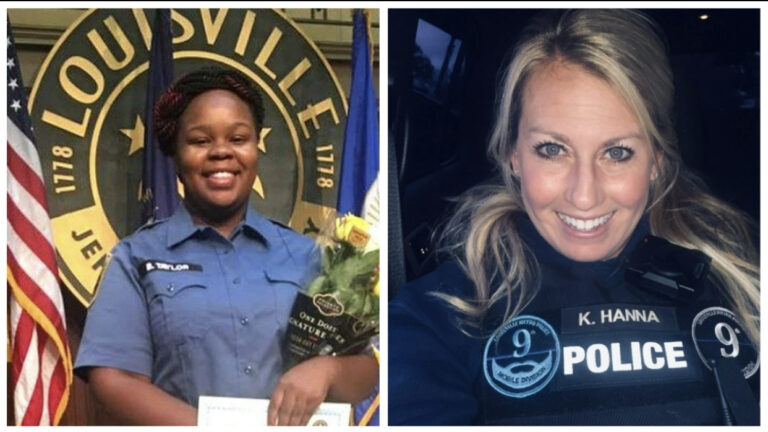 According to recently made public court documents, Louisville Metro police made their decision to fabricate  evidence in order to get a warrant to enter Breonna Taylor’s home, which ultimately resulted in her death, based on their “gut feeling.”

According to a plea agreement filed by LMPD Detective Kelly Goodlett and Detective Joshua Jaynes, they thought Taylor’s ex-boyfriend Jamarcus Glover, who they were looking into, was bringing parcels containing drugs or drug money to her house. Jaynes made the decision to fabricate evidence to back up their assumptions after realizing there was no proof.

“The detectives, knowing that they needed actual evidence, rather than just a gut feeling, to get a warrant, attempted to find evidence supporting this gut belief,” the plea agreement says.

When a group of plainclothes policemen entered Taylor’s residence early in the morning according to the “no knock” warrant, Taylor was hit by police gunfire. Kenneth Walker, her lover, opened fire after mistaking the police for invaders. According to reports, the 26-year-old Breonna Taylor was shot six times.

Taylor’s family claims that Glover and her had an on-again, off-again romance for several years. In January 2020, when police began watching him, they allegedly witnessed Glover leaving Taylor’s house with a package. When the lethal warrant was executed, Glover was already in custody. Glover claimed that Taylor last spoke to him on Valentine’s Day. At the time of the raid on March 13, 2020, she was seeing Walker.

Glover admitted to using Taylor’s flat for online shopping but denied ever sending anything illicit there. Taylor may have been receiving suspicious packages, according to Goodlett’s partner, who reportedly asked another officer with connections at the U.S. Postal Inspection Service. According to court records, the other officer told Jaynes there was “nothing there.”

The detectives forged a letter to obtain the no-knock warrant

Even yet, Jaynes made the decision to submit a request for the warrant along with a forged letter of verification from the postal inspector proving that Glover was having parcels delivered to the woman’s house.

“Det. Jaynes was the primary drafter of the Springfield Drive warrant affidavit, but Det. Goodlett fact-checked the affidavit and added some information to it,” the plea agreement says.

Steve Cohen, a former prosecutor with the U.S. Attorney’s Office for the Southern District of New York, told Time Magazine that officers tend to band together even if one is guilty of wrongdoing.

“For so many reasons and for so many years, it has always been difficult to obtain the cooperation of a law enforcement officer,” Cohen said. “There is so much pressure on you as a law enforcement officer to stand by your brothers and sisters. The notion of violating that relationship, even to vindicate a broader principle, becomes very difficult.”

Goodlett could be sentenced to three years of closely monitored probation, a $250,000 fine, and up to five years in prison. She is now the target of a civil lawsuit as a result of confessing to the scam.

In a lawsuit against Hankison and other witnesses for “blindly” firing rounds into their apartments, two of Taylor’s neighbors claimed that Goodlett’s plea agreement supported their claims. Taylor shares a unit with Chelsey Napper and Cody Etherton. Hankison is charged with firing through Taylor’s sliding glass door and window. According to reports, several of his rounds entered an apartment next door where three people were present.

On September 14, Napper and Etherton brought a lawsuit against Goodlett.

“Based on deliberate falsehoods in the completion by Goodlett of an application for the search warrant and an affidavit in support of the search warrant and misrepresentation of facts supporting probable cause, the warrant was unlawful,” the lawsuit states. “Other LMPD Officers should never have executed that warrant. As a result of their unlawful raid, Ms. Taylor died and the plaintiffs suffered physical and emotional injury and legal injury in the form of lost constitutional rights and property damage.”