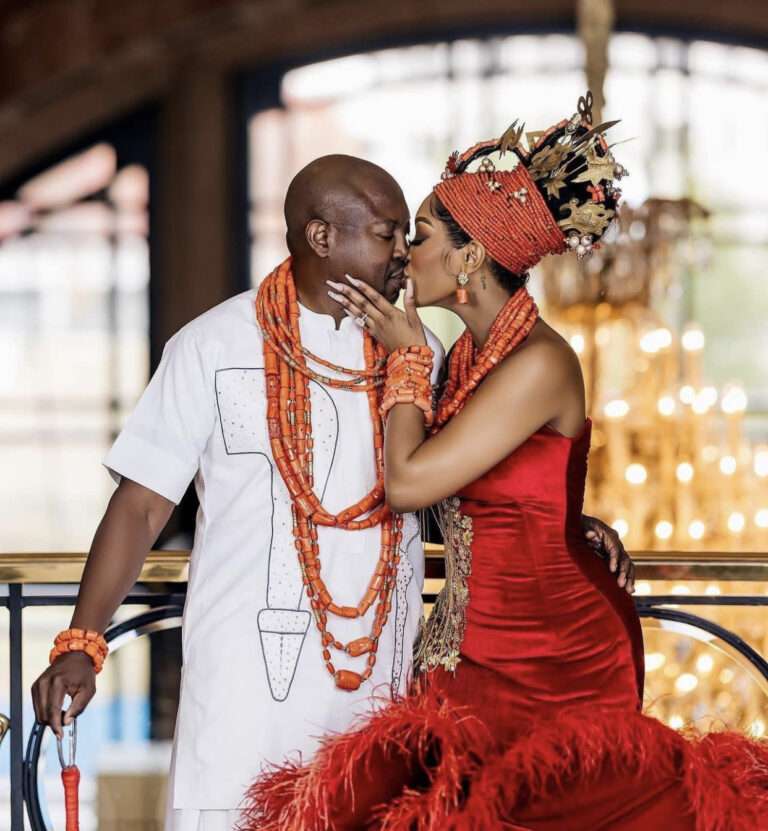 Porsha Williams and Simon Guobadia tied the knot at Atlanta’s Four Seasons Hotel and celebrated their love according to traditions from Simon’s hometown, Benin City in Nigeria’s Edo State.

In an exclusive interview with PEOPLE, Porsha shared that the Nigerian nuptials are just the beginning of an epic wedding weekend, including a second ceremony.

“I am ridiculously excited. “I am just so ready. I’m not even nervous. I mean, I know I’m marrying the love of my life, and it’s just going to solidify our relationship and our family bond. I’m calm and excited,” Porsha said leading up to the wedding.

Porsha was exquisitely dressed in a Red and gold Lakimmy-designed gown, Benin coral beads, and an okuku headpiece, simulating a typical Benin bride. She unintentionally exposed the same gown earlier this month on Instagram Live. She was equally prepared to walk down the aisle, in true Porsha fashion.

The second wedding will take place on November 26th, continuing the celebrations.

This time, Porsha Williams and Simon Guobadia will exchange vows at a white wedding in the United States. Following that, a ball and afterparty will be held for their 350 guests to celebrate.

To many fans’ disappointment, Simon and Porsha did not invite Bravo or any other cameras to capture the wedding. They even requested that guests ditch their phones to keep the moment intimate.

“It’s important for me because I’ve had another big event in my life before, and all I remember seeing was flashing lights and pictures being taken every single minute,” Porsha said to PEOPLE about her first wedding.

“I just really want people to be in the moment. This guest list, everyone there was handpicked by the both of us. These are people that we care about, people that we love, people who have supported us. We really want them to feel the energy and for us to celebrate our love together,” she continued.

The newlyweds requested that visitors dress in traditional Nigerian garb, and Porsha personally selected the purple and teal textiles that each family member used to create their individual ensembles.

The dinner included traditional foods from Benin as well as American Southern cuisine and wedding cake.

Simon was reportedly impressed with how much Porsha “immersed herself in the culture” to honor his Benin roots.

“I looked up different things about an Edo bride, about the Benin culture, about their ceremonies, just so that I would not be totally green,” said Porsha.

“I wanted to make sure that I was as respectful as possible because I didn’t want to not do anything that wasn’t within tradition, within their culture. So I had to be very, very serious, and I was very adamant that each detail was going to be authentic to their culture. I learned a lot.”

“It’s going to be a true fashion extravaganza. I just couldn’t turn any dresses down! If a wedding dress came my way, and I loved it, I got it,” Porsha said about her wedding looks.

Porsha told PEOPLE that she went above and beyond to transport her wedding guests to Benin.

“I want them to feel like they have taken a flight and landed in Benin. The whole room should be transformed with beautiful colors of browns and rose golds and tans and creams. It should be really, really beautiful and give you that authentic African feel,” she said.