Prayers up for Egypt, As heavy flooding and scorpion stings kill 3, land hundreds in Hospital 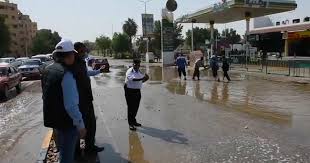 Heavy rain and flooding in a southern province in Egypt have left three people dead and more than 500 others hospitalized from scorpion stings; according to state-run media outlets in Egypt. Hails, Downpour  and thunder in the province of Aswan over the weekend forced local authorities to suspend school classes Sunday, Gov. Ashraf Attia said.

The storms forced scorpions from their hiding places into many houses across the province, Attia added. He said at least 503 people were hospitalized after suffering scorpion stings and that all of them were discharged after they were given anti-venom doses.

Acting Health Minister Khalid Abdel-Ghafar said in a statement that no deaths were reported from scorpion stings.

The Al-Ahram daily reported the deaths, citing Ehab Hanafy, the Health Ministry’s Undersecretary in Aswan. It did not elaborate on the cause.

The rainfall also caused power outages around the province.

Aswan typically gets less than a quarter of an inch of rain a year, but the unusual precipitation also reportedly included snowfall. Scorpions generally hide in crevices and under rocks during the day and emerge at night to hunt small lizards and insects.

It’s also not entirely clear which species is responsible for the attacks, but Egypt is home to a variety; including the deadly Arabian fat-tailed scorpion, or Androctonus crassicauda. The heavy rains also knocked down trees and utility poles, led to power failures in the area, and pushed snakes out of their hiding spots, as well.

Aswan is a popular tourist and commercial center just north of the Aswan Dam on the east bank of the Nile; with a population of approximately 1.57 million.