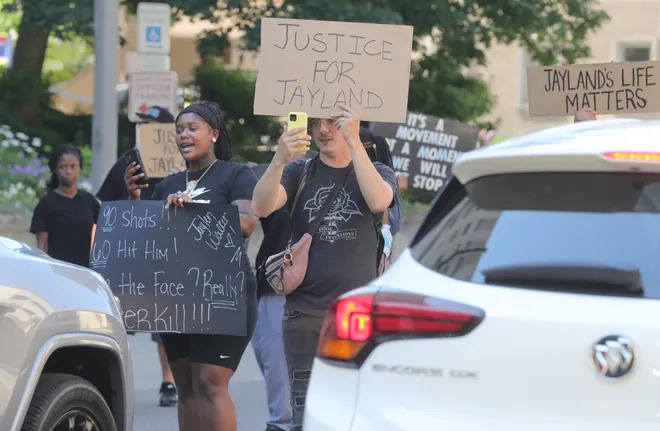 In Akron, Ohio, Protesters blocked the street in front of the Akron Police Department headquarters on Thursday, shouting “murderer” whenever an officer was seen during a demonstration in response to Jayland Walker’s police-involved shooting.

“It’s not fair to just be Black in a world where you gotta be scared that the police gonna kill you,” said Katelin T. of Akron, who asked not to provide her last name. “It’s scary giving birth to Black children because I don’t know what y’all going to do to them.”

About 20 protesters gathered at the mid-morning rally made public by Serve the People Akron as the state Bureau of Criminal Investigation continued to investigate the shooting that occurred early Monday morning in the city’s Firestone Park neighborhood following a chase that began in North Hill.

According to Police, Walker, 25, allegedly fired a gun at officers who attempted to pull him over for traffic and equipment violations. Body camera footage of the altercation has yet to be released.

Protesters led chants of “justice for Jayland,” “Black Lives Matter,” and “How do you spell murderer? APD” outside the Harold K. Stubbs Justice Center. while holding signs demanding justice, police accountability, and transparency.

“This is absolutely ridiculous,” Russel Fennell of Akron said. “They did it because they knew they could get away with it. To me, this is worse than George Floyd.”

“Racism is racism,” he added. I guess in Akron it’s never going away .”

Tywan Junius II, who was at the protest with his four-year-old son, criticized the police and called out the persons watching the protest from inside the justice center.

When a police officer passed by and waved to the protesters, they yelled back, “Are you gonna kill all of us?”

Protesters fanned out across South High Street about an hour into Thursday’s protest, which began at 10 a.m., blocking the one-way street while chanting “we ain’t moving.”

Officers were met with more shouting when they arrived and asked the protesters to clear the road; after about five minutes, all demonstrators complied. Soon after, the road was closed to all traffic.

As the road was cleared, Akron police Lt. Michael Miller emerged and spoke with protesters.

Miller reiterated the police department’s decision to release all of the bodycam footage of the incident at once, rather than just the three videos required by law. Miller would not specify a date for the release of the video. Still, it is expected to be done by Sunday under a city ordinance governing the release of video following officer-involved shootings.

That ordinance requires the department to share footage from at least three body cameras within seven days of the incident. According to the law, all footage must be released within a month of the incident.

Miller also stated that all officers involved had been placed on paid administrative leave, but he would not specify how many officers were involved.

Thaddeus D., an Akron resident who asked not to be identified by his last name, had not planned to attend the protest but joined after seeing the crowd forming.

“This could be me. It could be me they’re protesting for,” he said, holding a Black Lives Matter flag. “Sometimes you gotta do something that don’t have nothing to do with you because it could be you or it might be you. You have to be proactive instead of being reactive.”

As a result of the protests, some proceedings in the municipal court complex adjacent to the police department were postponed on Thursday.

Though the Summit County Courthouse remained open, some employees worked from home, and a few judges switched to video rather than in-person proceedings. One judge rescheduled an in-person hearing in a murder case for Friday morning.

The crowd thinned out shortly after noon, but protesters plan to return.

.”We keep demanding justice. We keep trying to hold the police department accountable,” Destinee Jackson of Canton said. “We’re not leaving until justice is served, and we get answers and all these racist cops are out.