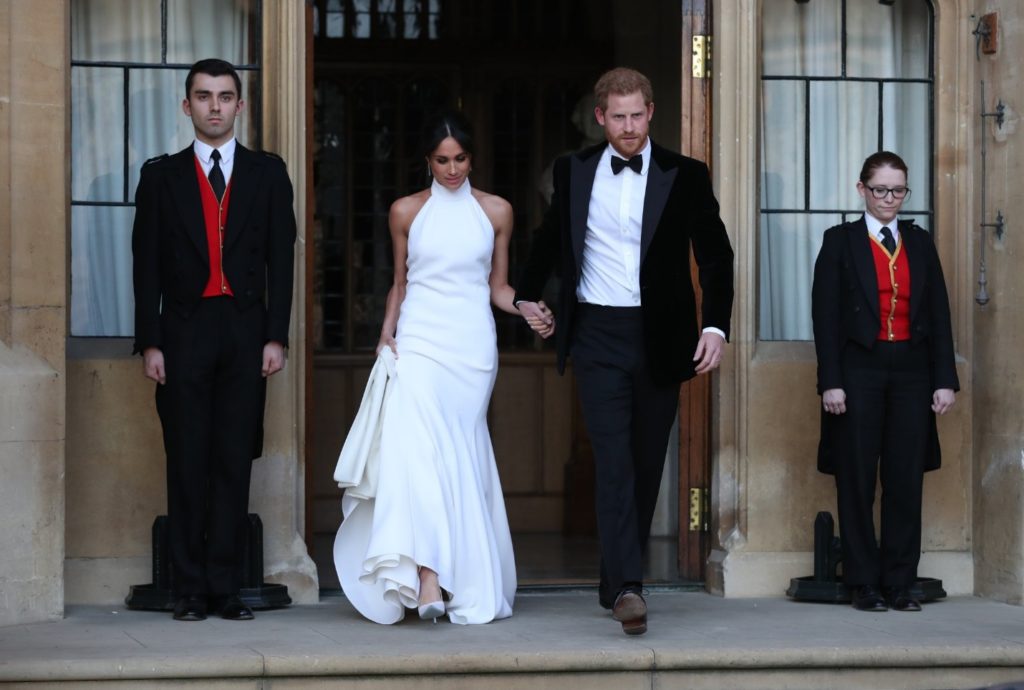 • Each has a new title. Harry is now the Duke of Sussex, Earl of Dumbarton and Baron Kilkeel. Ms. Markle will be known as Her Royal Highness the Duchess of Sussex. Oprah Winfrey was there. So were Elton John, Serena Williams, and the Clooneys and the Beckhams. The dress was by Clare Waight Keller for Givenchy. The big moment was the rousing sermon by the Most Rev. Michael Curry. If you’re in the U.S. and slept in.

Ms. Markle, who in a span of an hour was transformed from a Ms. to Duchess, successfully made her way down the aisle to meet her very-soon-to-be husband, Prince Harry.

HERE COMES THE BRIDE! ALL DRESSED IN WHITE!

They both looked so happy and so relaxed. They were beaming as they said their vows, and luckily, no one came forward to provide any reason that they might not be married. (This is always an exciting moment in a ceremony.)

It was an extraordinary mix of tradition and modernity, of centuries of history and up-to-the-moment flourishes. Oprah was here, and so was Meghan’s mother, an African-American social worker who wore a conventional mother-of-the-bride outfit and also a nose stud.

OUR BLACK MOTHER OF THE BRIDE.

Dora Ragland, Mother of the bride, Prince Charles, Prince of Wales and Camilla, Duchess of Cornwall, walk down the steps at the Windsor castle after the wedding.

The entire royal family was here, along with a complement of English aristocrats and important personages. The music was stately and beautiful. The setting was awe-inspiring.

There was a flotilla of clergymen, an extraordinary mélange including the archbishop of Canterbury and — in a striking inclusion in this most ancient of places — the head of the Episcopal Church, the Most Rev. Michael Curry.

Chosen to give the address to the congregations, Bishop Curry, who is African-American, quoted Martin Luther King. His voice rising and falling with emotion, he made a big, generous, impassioned case for love as the most important thing there is, in religion and in life.

His address came after a reading by Lady Jane Fellowes, Harry’s aunt (her sister was Diana, Princess of Wales) that was both full of joy and a signal, it seemed, that the sadness in Harry’s life since his mother’s death had finally lifted.

It was a passage from the Song of Solomon: “Arise, my love, my fair one, and come away; for now the winter is past, the rain is over and gone.”

• In the scheme of things, this particular marriage is not all that important. Harry is only sixth in line to the throne. But Ms. Markle is a highly unusual royal bride: She’s American, divorced, three years older than Harry, had a high-profile career and is biracial.

It was absolutely simple: pure and sculptural, in double bonded silk cady with a wide boatneck, long sleeves, and sweeping train.

It was Meghan Markle’s wedding dress. It was by Clare Waight Keller, a British woman and the first female designer of Givenchy. And it was everything people had hoped.

This was not a Cinderella choice, not one that spoke of fantasy or old-fashioned fairy tales. Instead, it placed the woman proudly front and center and underscored Ms. Markle’s own independence.

THE MOST GOSSIPED ABOUT DRESS TURNS OUT SIMPLE, PURE AND SCULPTURAL

MEGAN MARKLE MAKES HER GRAND ENTRANCE INTO THE CHURCH

At the same time, it celebrated female strength, promoted a local designer and reached a hand across to Europe (where Ms. Waight Keller has a day job).

The five-meter veil was of silk tulle, with a trim of hand-embroidered flowers in silk threads and organza, and contained embroidery representing the flora of all 53 Commonwealth nations.

And it was entirely a surprise. In all the rumors that had swirled around The Dress, from Ralph & Russo to Stella McCartney, Ms. Waight Keller’s name had never come up. In the end, Ms. Markle outthought us all. As this starts, long may it continue.

DUKE AND DUCHESS OF SUSSEX IN THE ASCOT LAUDAU CARRIAGE.

And the After-Party Dress

The newly minted Duke and Duchess of Sussex departed Windsor for their evening reception at Frogmore House in a very James Bond fashion. The Duchess wore a second dress by designer Stella McCartney.

PRINCE HARRY. DUKE OF SUSSEX AND THE DUCHESS OF SUSSEX DEPART FOR THE EVENING.

For many people, the most striking thing was the sermon by the charismatic Bishop Curry, who preached a ringing message of love — with references to Martin Luther King Jr. and to the legacy of American slavery — with such joy and such enthusiasm that it was impossible not to feel joyful and enthusiastic right alongside him.

“Set me as a seal upon your heart, as a seal upon your arm, for love is as strong as death; passion as fierce as the grave. It’s flashes of fire, of raging flame. Many waters cannot quench love, neither can floods drown it out.” — Bishop Michael Curry.

It was as if a Southern Baptist preacher had suddenly wandered onto the set of “Downton Abbey.”

The speech began trending on Twitter, with people marveling at the spectacle of seeing such a man saying such things in such a place.

HOT ROYAL KISS! AND SO THEY KISSED HAPPILY EVER AFTER.

IDRIS ELBA AND SABRINA DHOWRE WALKS AHEAD OF OPRAH