SAHARA DESERT : From Lush green to a Desert 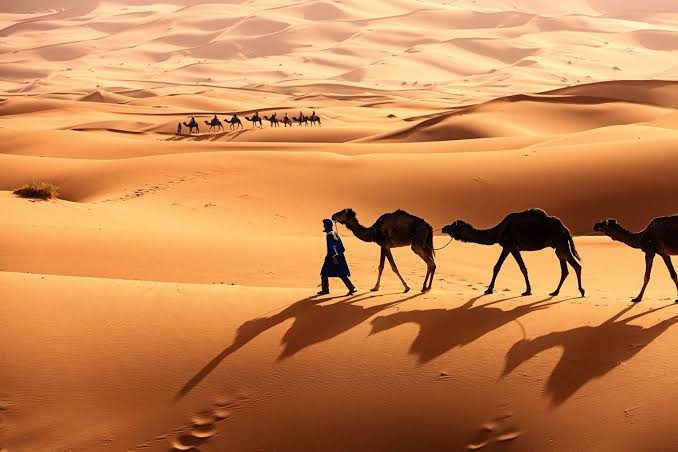 Until about 10,000 years ago, research and archaeology have shown, that the Sahara desert in Africa use to be “a vast green land of Savannah belts, acacias, lakes, Wildlife and Mahogany trees.

These were conclusions based on recent scientific research into the wide Sahara desert that occupies about 30 percent of Africa’s landmass.

Scientific Claims on the Transformation

A recent study suggests humans played a major role in the transformation of the desert.

Author David Wright, an environmental archeologist at Seoul National University, said that “as humans spread west from the Nile river 8,000 years ago, they brought with them sheep, cows, and goats that gobbled up, mowed down, and trampled over native vegetation. This transformed the landscape and altered the local climate”

Wright said “Goats are the prime suspects; because I’ve literally seen a goat eat a brick ;  they aren’t picky eaters at all, and they eat a lot for their size. It wouldn’t take many goats on a stressed-out landscape to make a pretty big impact.”

Therefore, if hungry; plant-eating mammals already dotted the Sahara, why did domesticated animals play such a transformative role? The answer is that animals don’t like to spend a lot of time out in the open; where they can be easy targets for predators. However, livestock is happy to denude a field of grass under the watchful eye of a human guardian.

Author Wright believes that overgrazing led to drought. Drought stunted the growth of vegetation; which further transformed the landscape, which worsened the drought; in a feedback loop that eventually produced a hot, dry, dusty desert roughly the size of the United States.

Other Scientists generally attribute the transformation of the Sahara to changes in the Earth’s orbit; which deprived the tropics of sunlight, leading to a drop-off in summer rainfall.

Wright says that human migration pushed the region to a tipping point. The landscape did not transform slowly and uniformly, as would be expected if variations in the Earth’s orbit were the only factor.

Rather, it changed in fits and starts, following the spread of livestock. Wherever humans went, they left scrubland in their wake.

The Sahara Desert and its Role in our History

The word Sahara was derived from the Arabic language, meaning the ‘sea of sand’ and the African Sahel was known as the ‘coast,’ during the trans-Saharan trade that facilitated the trade in African produce in the Mediterranean.

Great empires had risen and fallen here in medieval times. Among these was firstly the Ghanah kingdom( from 8th century CE) which pioneered iron smelting after the decline of the previous kingdoms; a decline that archaeological research showed to have been caused by the expanding desert.

The Second kingdom which rose to become one of Africa’s largest empires was the Mali empire . This empire was centered around two great cities of Timbuktu and Nani . Sankore university in Timbuktu was about the third ever university to exist in the world. This city was West Africa’s center of learning and gold merchants, where, according to Ibn Battuta, a 14th century Morocan writer and explorer, who travelled around Africa, Asia and Europa; wrote that “‘books were more expensive than gold’ in Timbuktu. Gold was in abundance in west Africa, but ‘books and salt were scarce’ and the people often sought after both.”

The Mali empire was described by Al’bambari in the TARIKH AL FATASH (the chronicles of the seeker) written in the 14th century CE as “Mali encompasses a region of four hundred towns and its soil is extremely rich. Among the kingdoms of the world, only the land of Syria surpasses it. Its inhabitants are rich and live very well.”

The third empire to emerge here on the edges of the desert, on the banks of the Niger river, before the Portuguese arrived in the 15th century, was the Songhai empire; the first King of which was Sunni Ali, whom the chronicles of Timbuktu described as “The Sunni Ali, the model of shameful conduct…” probably because of his ruthlessness and repressive rule. This was in medieval times.

Dispersed inhabitants to both South and North-East Africa

Research showed that ; In Ancient times, the desert encroachments had sent the inhabitants of what became the Sahara desert; to the South and to the North-east of Africa, where they would “build the foundation of the civilization of the Pharaohs. Dr Ivan Van Sertima said “Seed of Crops found in tombs in Egypt; are known to be indigenous to West Africa but not around the nile”