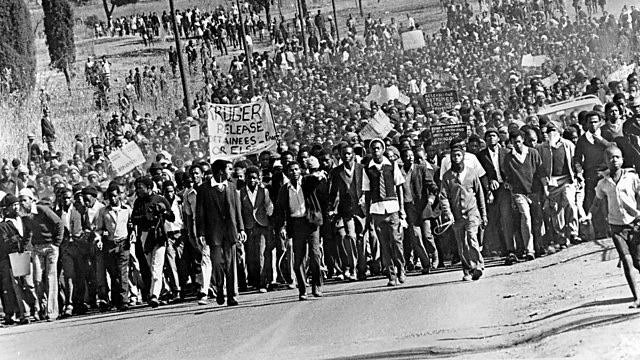 South Africans  commemorated the 44th anniversary of the Soweto Uprisings on June 16th. June 16th honors the student-led protests of 1976 which challenged the education system under the Apartheid regime. In the past, South Africans have celebrated by participating in various events across the country in addition to massive rallies held by a number of political parties.

However, in light of the ongoing COVID-19 pandemic and social distancing measures, many of the celebrations will take place online.

Lined up along a Soweto street, the young people sang anti-apartheid anthems and held up posters saying “Äsivikelane”; Zulu for “Protect each other,” urging people to work together to stop the spread of the coronavirus. Some held up a banner saying “Use the spirit of June 16 to fight Covid 19.”

Others held up placards in support of the Black Lives Matter movement and calling for an end to domestic violence against women.

The commemoration marked June 16, 1976, when students in Johannesburg’s poor township of Soweto demonstrated against the white minority government; and were fired upon by security forces causing the deaths of several students.

The tragic event, symbolized by the iconic photograph of a lifeless 13-year-old Hector Pieterson being carried away after he was shot by police; was sparked by black students rioting against the state’s imposition of the use of Afrikaans; a Dutch-based language, for learning in several school subjects. More than 170 students and others were killed in protests over several weeks.

Aftermath Of The Soweto Uprisings

The Soweto uprisings was a galvanizing point in the battle to end the oppression of white minority rule. South Africa achieved democracy with majority rule elections in 1994.

The commemoration Tuesday was held near the Hector Pieterson Museum which highlights the history of the students’ protest. This year’s gathering was muted by the coronavirus restrictions; which have banned groups of more than 50 people, as well as by cold, rainy weather.

“Celebrating June 16, 44 years later, we must draw strength from the from the battles and the heroic struggles of young people and defeat this pandemic as well,” said Geoff Makhubu, the mayor of Johannesburg.

“Every June 16, we remember the 1976 Soweto Uprising where students fought with great courage for their right to education & dignity. Today, we must continue the fight for all children to have a healthy, safe start in life, free from harm, for the Africa we want,” he said in a tweet.