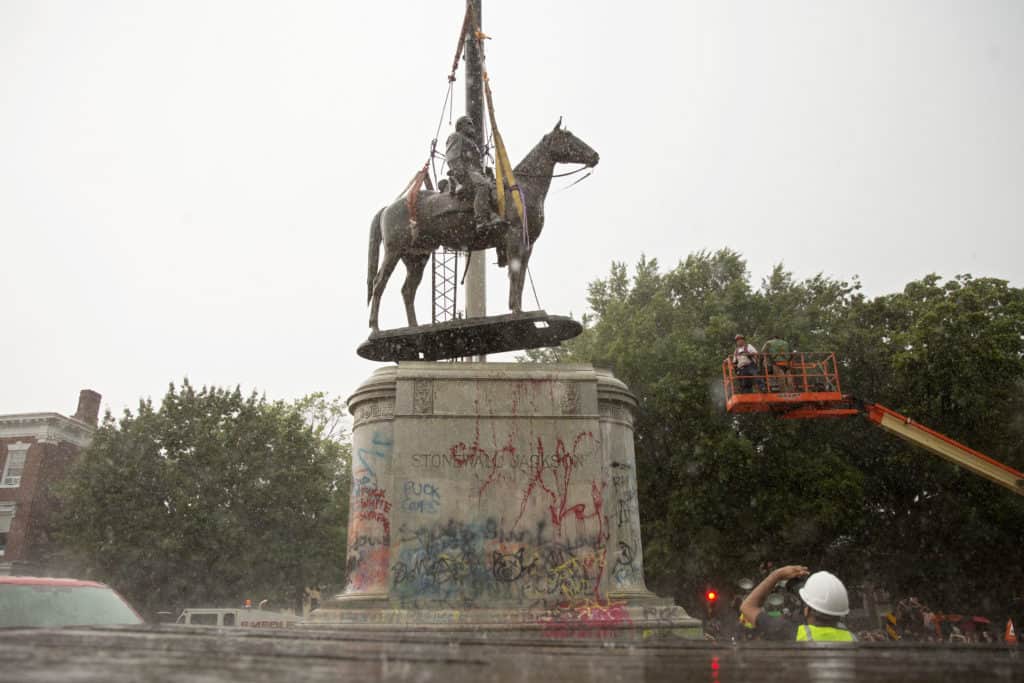 The wind of change is blowing even stronger. Years of idolizing the foundation of black suppression is finally coming to an end. It looks like Richmond, VA is starting the process of removing the Confederate monuments along Monument Avenue. On Wednesday, Mayor Levar Stoney ordered the statue of Confederate General Stonewall Jackson to be removed, as well as the others. Within a few hours, the statue of Stonewall Jackson was down. The removal of others is soon to follow.

According to the Associated Press, work crews spent hours attaching a harness to the statue; and used power tools to carefully remove the statue from its pedestal; as a crowd of people watched and cheered. The mayor said he is acting fast on having the statues removed because; he is concerned people could get hurt if they try to remove the statues themselves.

Mayor Stoney commented on the long-overdue removal of the statues and said; “Those statues stood high for over 100 years for a reason, and it was to intimidate and to show Black and brown people in this city who was in charge. I think the healing can now begin in the city of Richmond.”

Last month, Governor Ralph Northam ordered the removal of the Robert E. Lee statue; and spoke about removing the statue during a press conference. The removal of statues across the world comes after many protests have taken place in support of George Floyd; Breonna Taylor, Ahmaud Arbery, and the other black lives that were tragically taken.

During the press conference he said, “You see, in Virginia; we no longer preach a false version of history. One that pretends the Civil War was about ‘state rights’; and not the evils of slavery. No one believes that any longer.”
On Wednesday, he took to Twitter to celebrate the removal of the Stonewall Jackson statue and said, “A monumental day in Richmond that begins the important process of removing these painful symbols of our past. Thank you, next.”
Statues stonewall Jackson
Share. Facebook Twitter Pinterest LinkedIn Tumblr Telegram Email
admin