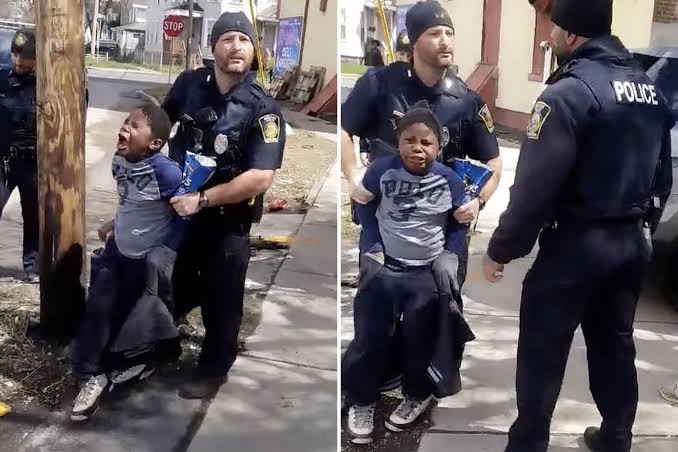 A group of Syracuse police officers are currently under fire; after a viral video captured them putting an 8-year-old black child; into the back of a squad car for allegedly stealing a bag of Doritos from a grocery store. According to the New York Post, the video was shared by Kenneth Jackson, a local resident, who can he heard in the video asking the officers about the boy’s alleged offense. He eventually offered to pay for the bag of chips, but officers insisted that stealing the Doritos; was “against the law” as they continued to usher him into the patrol car.

The unnamed boy, could be heard screaming and wailing as an officer grabbed him by the arms to place him into a police car.

Kenneth Jackson told Syracuse.com he had pressed his phone’s record button as soon as he saw the boy “snatched off” the bicycle by police.

“It was just beyond me that they were actually treating this baby like this,” he told the outlet.

The Syracuse Police Department said in a statement that it was aware of the incident and would be reviewing the officers’ body-camera footage. The department clarified that the child “was not placed in handcuffs,” as some people who had seen the video across social media had posited.

The video, which has since gone viral, shows a tense scene as another child tells the officers, “It wasn’t him!” At the same time, Jackson and other adults begin arguing with police.

One of the officers tries to explain, “These kids have been stealing from — ” before he gets cut off by another man screaming, “A bag of chips!” in disbelief.

Police took the boy and his two brothers home.

Their father, Anthony Weah, told Syracuse.com the officers were friendly. They didn’t press charges or ask Weah to pay for the Doritos. Their calm demeanor gave him nothing to worry about until he later saw the video Jackson had taken; which garnered millions of views after it was shared widely across Facebook, Twitter and TikTok.

“You can’t treat him like that because of a bag of chips like he killed somebody,” Weah told WSTM. “He’s not a criminal.”