The Mystery behind the Hyena Men of Northern Nigeria 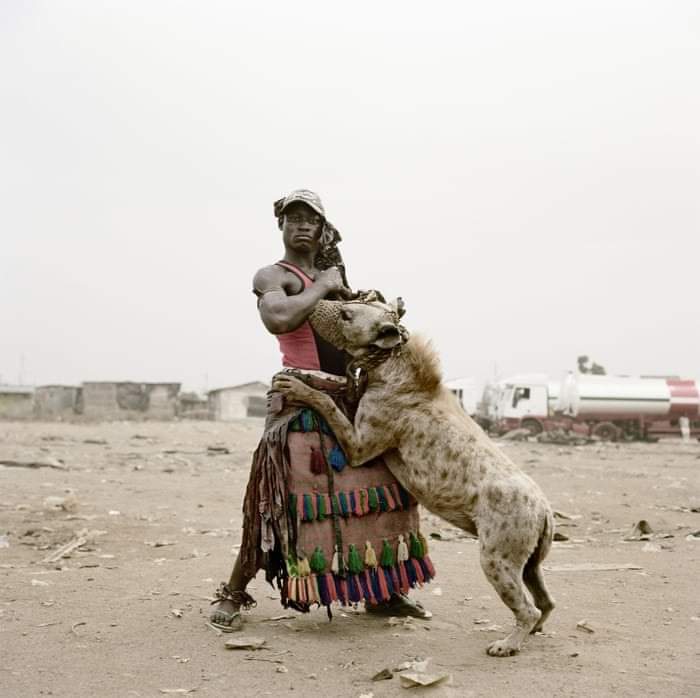 Can you imagine having a live snake’s head inside your mouth? Well, for a group of men, better known as hyena men, in Northern Nigeria, this has become part and parcel of their life. These men make a living through entertaining people on the streets with different wild animals such as hyenas, baboons, and snakes.

The men are nomadic and move from city to city entertaining large crowds of people that gather to witness the magic. This tradition is passed down generations and it’s believed that the men are protected by charms and potions.

From a tender age children in this community are made to interact freely with the three types of wild animals. The men do this by forcing the children to drink concoctions and sit near the said animals. This helps the children who are later supposed to take over the role of entertaining people through the same wild animals overcome fear.

How the Hyena Men Get Hold of the Wild Animals

The hyena men occasionally visit the dens in the forest to steal the snakes, baboons and hyena pups. They then start training them from that tender age, bringing them under their control and finally take them to the street to perform the dances when they are of age.

The funny thing is that these two have a mutual relationship and depend on each other for survival. Once the wild animals are out of the forest they become entirely dependent on the hyena men to feed, protect and guide them. At the same time the hyena men owe their survival and source of living to the wild animals. For this reason the two are like best friends and always looking out for each other.

According to Pieter Hugo, a renowned photographer who once had the privilege to photograph the street dancing event, he notes that, “it’s a huge spectacle. They beat drums to draw in the crowds, and then take the muzzles off the hyenas. Next they put their arms and even their heads between the animal’s jaws. The aim is to convince the audience they have special powers and that the audience can acquire them too- if they buy their potions”.

Why you should travel to Timbuktu