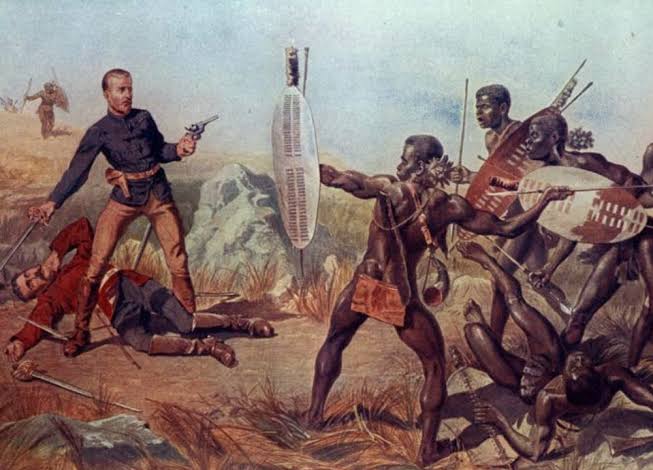 Senzangakhona, the young chief of the Zulu – which derived its name from one of Malandela’s quarrelsome sons, fathered a son out of wedlock, Shaka In 1787.
After serving a number of years in Dingiswayo’s army, where he excelled as a military tactician and officer, Shaka became the Zulu chief after his father’s death. At that time the Zulus were a small group of possibly 1,500 people, which Shaka was determined to build into the major force in the political development of the subcontinent.

From the handful of men Shaka had available, he created the beginning of what would become his army which, over a period of 12 years; he formed into a formidable fighting force, which came to eventually included the armies of formerly independent neighbouring groups. In doing so, he transformed his small chiefdom into the mighty Zulu nation.

Assassination of Shaka of the Zulu Empire

In 1828 Shaka was assassinated by his half-brothers, Dingane and Mhlangana. After bitter squabbling between the two brothers and their supporters; Dingane gained the upper hand and took over the leadership of the Zulu empire. Dingane lacked the military genius of Shaka and the leadership qualities required to hold his empire together; and so the edifice that Shaka had created began to crumble. Rebel chiefs broke away and Dingane did not have the ability to force them back.

White settlers were beginning to arrive in colonial Natal in increasing numbers, adding new tensions to those turbulent times. The green hills were seen by the Voortrekkers; disgruntled white farmers who had emigrated from the Eastern Cape; as their new eldorado, and they made overtures to Dingane for land on which they could settle and establish their farms. The Zulu king feared that this would be the thin end of a wedge that would eventually topple him from his throne; and so he had Piet Retief, the Voortrekker emissary who had come to negotiate with him, and his companions put to death.

He also sent his army to kill their women and children and the men guarding the Voortrekker camps at distant Bloukrans, near present-day Estcourt. Those who survived swore, in a covenant with God, to avenge their deaths and to build a church in His honour if victory in the battle against the Zulu were granted to them. On 16 December 1838 on the banks of the Ncome River, which was renamed Blood River, revenge was ruthlessly and bloodily exacted.

According to SouthAfrica.Co, Over 3,000 Zulu warriors were killed in battle, while only the Voortrekker leader sustained a minor injury. The defeat was humiliating and the backbone of Dingane’s Power was irreparably cracked. However, his army was only finally defeated when Mpande, Dingane’s remaining half-brother; who had amassed a considerable following and built a powerful army, attacked him on the Maqongqo hills near the Swaziland border.

Dingane, now a refugee Zulu king with a handful of followers, tried to flee to Swaziland but was killed before he reached there. Mpande, the longest-reigning monarch in Zulu history; succeeded Dingane to the throne and ruled over a much reduced Zulu kingdom from 1840 to his death in 1872. Mpande had been considered harmless, if not an idiot, by Dingane; and so had been spared when Dingane rid himself of all perceived sibling threats on accession to the throne.

However, he proved to be a shrewd ruler who played both ends of the political spectrum; maintaining a dignified but qualified subservience to his white neighbours in the Colony of Natal south of the Thukela River; while retaining control over and the loyalty of his followers north of the river.

After Dingane’s death, his son, Cetshwayo, became the new king in 1872. He was a forceful man who steadily reinstated much of the military discipline his uncle, Shaka, had developed some 50 years before; with this came a resurgence of Zulu pride and a sense of destiny. The spectre of a militant Zulu nation north of the Thukela began to send tremors through the fabric of colonial Natal.

“The Zulu, a Major Threat”

Queen Victoria’s officers were determined to see English control extended across Africa, from the Cape to Cairo. Zulu power was viewed as a major threat to this vision, and war between England and the Zulu became inevitable. It began after an impossible ultimatum issued by the British to the Zulu was ignored.

The first major clash was at Isandlwana on 21 January 1879 when the Zulu inflicted the largest defeat the British army suffered in its colonial history. The war ended at Ulundi on 4 July of the same year; when Cetshwayo’s military headquarters at Ondini were razed to the ground and his armies routed.

The Colonial Office however took over the administration of Zululand and immediately set about reducing the power of the royal house; by dividing political power between 13 independent chieftainships.

This led to a smouldering civil war, a period of continued strife and the increasing intervention of the Natal colonial administration in the government and control of Zulu affairs. With the advent of Union in 1910 and white control over the whole of South Africa; white absolute power was entrenched and the Zulu king’s hope of attaining state recognition became increasingly remote.

The status of Cetshwayo’s son, Dinuzulu, and his grandson, Solomon, was reduced to that of an ordinary chief; charged with little more than control over a small area of what had once been the Zulu kingdom. It was only in the 1950s that the Nationalist government appointed King Cetshwayo’s great-grandson, Cyprian, as paramount of the Zulu.

However, the present king’s powers are essentially symbolic. As such, he carries a sacred axe ‘inhlendla’ on important state occasions; and he presides over key rituals; among them the annual Reed Ceremony, which was first introduced in 1984.

After the death of King Zwelithini, the Son of Cyprain, in March 2021, his son Misuzulu was appointed king in may  2021.