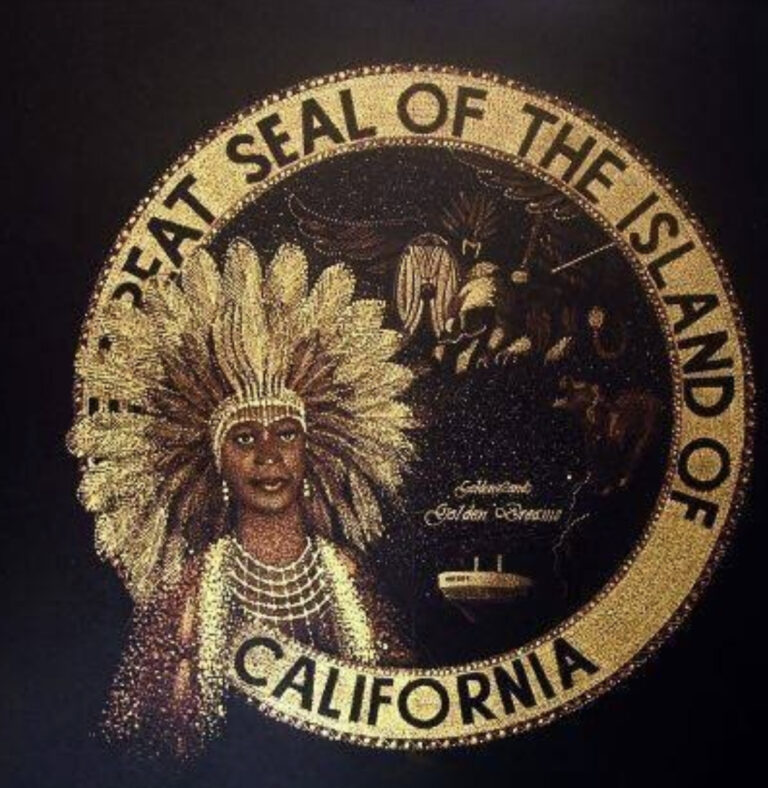 California has long been associated with fantasy but the name “California” also has a rich African American heritage. Few people are aware that California’s name was inspired by an imaginary kingdom ruled by Calafia, a Black queen centuries before Hollywood. The peninsula on the western side of Mexico was given the name “California” by Hernán Cortés’ conquistadors in 1530, after a fictional island in a Spanish book written decades earlier. This was during a time of shipwrecks, mutinies, and the fall of the Aztec Empire.

The name comes from a knightly romance novel that was released in 1510. According to the tale, a stunning Black Queen named Calafia ruled over a paradise island close to the Indies. She ruled a nation of Black Amazons that was rich in gold and pearls. To support the maintenance of the race, men were only permitted on California for one day per year.

The discovery of pearls in 1535 led the Spanish explorer Cortez and his soldiers to believe they had discovered the island. Francisco de Ulloa later discovered that what he thought was an island was actually the Baja peninsula.

Calafia’s life and land “at the right hand of the Indies” were described in a novel was written about 1510, by Garcia Ordonez Rodriguez de Montalvo, a Spanish writer, and was entitled “Las Serges des Esplandian”. To some extent, this document helped to precipitate the Spanish hunt for gold in North America.

It is believed that thirty years later, when the explorer Cortes and his crew landed in what is now Baja California, he told his men—many of whom were African—that they had reached Calafia’s territory. The Baja Peninsula was given its name by the Spanish when they first began exploring the Pacific coast because they initially believed it to be an island. The name stayed after it was added to the maps. Early in the 16th century, Seville, Spain, published the following declaration:

Which translates to; “know that on the right hand from the Indies exists an island called California very close to a side of the Earthly Paradise; and black women populated it, without any man existing there because they lived in the way of the Amazons. They had beautiful and robust bodies and were brave and very strong. Their island was the strongest of the World, with its cliffs and rocky shores. Their weapons were golden and so were the harnesses of the wild beasts that they were accustomed to domesticate and ride because there was no other metal on the island than gold. Las Sergas de Esplandián, (novela de caballería) by García Ordóñez de Montalvo. Published in Seville in 1510.”

At first glance, Queen Calafia seemed to have appeared straight out of a contemporary fantasy book, presiding over a realm that would not have been out of place in Westeros or Middle Earth. Her island, which is stocked with treasure and solely home to Black women who tame wild griffins to ride into war, is situated “on the right side of the Indies, quite close to… the Terrestrial Paradise” (fed with the flesh of any unfortunate men who show up). Calafia is regarded as being attractive, powerful, and brave. She is consistently portrayed positively in the book, despite the fact that it finally subjugates her to the medieval European patriarchy.

According to AAregistry, by 1770, the entire stretch of the Pacific coast that Spain controlled had been given the name California, and those who called it home, the Spanish people who lived there were known as Californios. The narrative was published in the Atlantic Monthly magazine in 1864 after Edward Everett Hale translated a piece of the original for The Antiquarian Society.

The best-known depictions of Queen Calafia are murals done by well-known artists. One seven-foot-high panel showing Califia as a Black woman with her Amazons is in The Room of the Dons at the Mark Hopkins Intercontinental Hotel in San Francisco and was created for the opening of the hotel in 1926, by Maynard Dixon and Frank Von Sloun. Another famous depiction, created by Louise Lloyd and entitled “The Naming of California”, can be seen in Sacramento in the Senate Rules Committee Hearing Chamber on the 4th floor of the State Building.

Calafia has been portrayed as the spirit of California and has been the subject of contemporary sculpture, paintings, stories, and films. She frequently appears in the myth of California’s origin, representing an uncharted and abundant land before European arrival.

A Theatre Production On Calafia

In October 2021, a production by the Antenna Theater of San Rafael, sought to showcase the rich story of Calafia. A modest crowd gathered at Dunphy Park in Sausalito to witness the return of a mythical head of state. Dressed in yellow and gold and covered in jewels, Queen Calafia stepped off her boat and onto California soil for the first time in hundreds of years.

The memory of Calafia largely faded. She has only appeared in popular culture in fits and starts: in a Diego Rivera fresco at the City Club of San Francisco, in a mural at the InterContinental Mark Hopkins San Francisco hotel and in a Disney California Adventure Park movie, in which she was played by Whoopi Goldberg.

Raylene Gorum, who attended the gathering, lives on a houseboat in Sausalito and said she only found out about Calafia a couple of months ago.

“I found it really intriguing and I really would like to celebrate this part of California history. I think it’s the right time.” Gorum said.

During a moment of racial reckoning in the United States, as racist statues are being removed and schools renamed, many considered Calafia’s story part of a nationwide movement to re-examine and re-tell our nation’s history. Among them is Dee Nathaniel, the actress playing the queen herself.

Regardless of what she represents, the Calafia story is essential knowledge for every Californian, argues Chris Hardman, the Antenna Theater’s artistic director.

“It’s our origin story. It’s like if you’ve decided not to read Genesis and you were a Christian,” Hardman said.

And he thinks that theater is the right medium to bring that story to life.

“That’s what the potential of the theater trick is. It brings the history in and puts it right in front of you, and says, ‘It’s live. Deal with it. Get in there, understand this.’ ”

All these efforts have one goal: to make Queen Calafia a household name in her own kingdom.

Some Interesting Facts About California