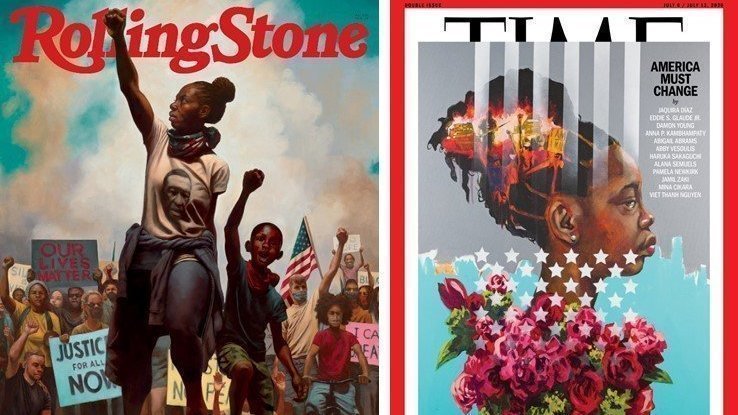 Despite the fact that we realize that the black woman fights for her nation; her family, her husband, her son. It is however problematically ambiguous to keep depicting black women as the sole drive force of the black community. Time and Rolling Stone Magazine Stereotypically depicted black women in a problematic manner in their recent front covers.

The Petition Against Time And Rolling Stone Magazine

According to the petition, Which has been signed by over 13 thousand people;The recent covers of Time and Rolling Stone magazine are extremely problematic for the image of black women and girls. The Rolling Stone cover for July shows an unambiguous dark skin black women as the face of the Black Lives Matter movement. The problem with this depiction is that it reinforces the toxic stereotype of the strong independent black woman.

What triggered the protests across the globe was the unfortunate murder of George Floyd and as such, black MEN need to be the face of this movement. You also showed her holding the hand of a black boy, which implies that she was raising her son alone. Why is there no depiction of a black man on the cover with her?

Masculinization Of The Black Woman

The Time magazine cover of July is problematic for a similar reason. The cover shows what appears to be a young black woman who is stressed and tired. The image of this young woman suggests the idea that black women, especially dark skin black women, as the face of struggle and pain. The drawing also has a sign in her hair saying ‘I am a man.’ This sort of promotion only masculinizes the image of black women. It strips us of our womanhood and reinforces the notion that we can take on the burden of the world. The woman on this cover is far too young to be weary of the world already. Young black girls deserve to be seen as innocent children and not foot soldiers for the community.

The most problematic part of these covers is the fact that black men made both of these covers. Both of the black men in question do NOT have black women as their wives. Therefore, they are unfit to be the stewards of our image in any way. These men represent a problematic faction of black men. They represent the black men that value other races of women above us, and only use black women as pawns for their cause. We are meant to be labor for the black community and take bullets at a march, according to them.

They push the narrative that black women, especially dark skin black women, are only fit to be their race soldiers. Even more troublesome is that when these men want to represent women that they think are beautiful, they NEVER choose black women. In the rare instances they choose a black woman, she is either mixed race or racially ambiguous. Black men, like the artists you choose, only remember we exist when they want something from us. They do not love us or care about our image.

Black women deserved to be loved and protected. We are worth more than the pain we take. We are worth more than how much we can struggle and we demand that you stop working with black male artists in the future that do not truly value us beyond our pain tolerance. They encourage the entire world to view us as men without penises. Black women are not indestructible and we deserve respect. We ask that in the future be more cognizant of how you represent us and choose better artists to for the job. Thank you.