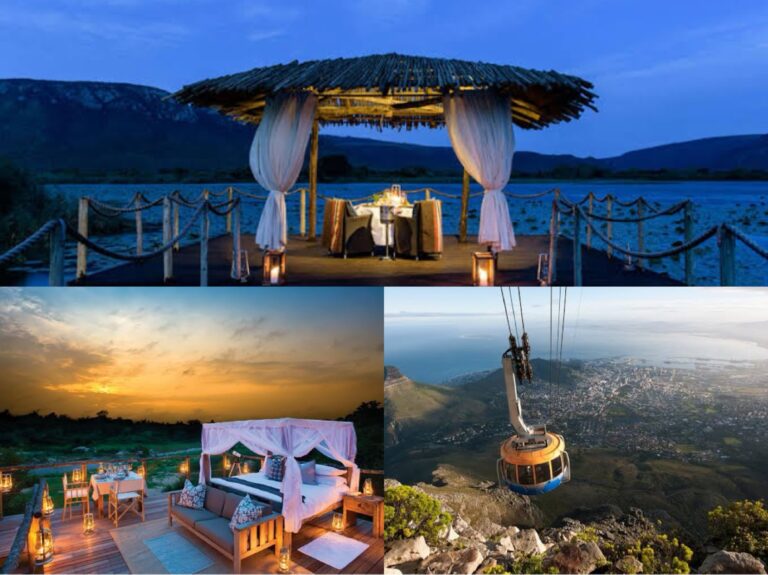 As a tourist, traveling around the world and visiting beautiful places, remains one of the top goals. Places like Santorini in Greece, Ibiza in Spain, and many others are usually top on the list for many travellers; but do you know that South Africa has not just one or two beautiful places? But up to 10 or more adventurous and fulfilling places for you to visit.

As an adventurous traveler that likes to explore new places, you can’t help but wonder how beautiful these places are; where in South Africa are they located? Are they worth your time? How safe are these places? We will be focusing on these as we run through a list of the top 10 places to visit in South Africa.

We hope at the end of this article, you will be well familiar with these places and you can make up your mind to visit them someday.

South Africa is such a beautiful country that it offers a lot—ranging from off-roading on a safari to diving with great white sharks. For those interested in exploring lovely beaches, climbing high mountains, and enjoying the view of wildlife, South Africa is indeed blessed with a lot to make you enjoy your stay. Before we move forward, what do you know about South Africa? Let’s quickly take some facts about the country.

South Africa, also referred to as the Republic of South Africa, is the country on the African continent that is furthest to the south. The country is famous for its varied topography, remarkable natural beauty, and cultural variety. These beautiful attributes have made the country a favorable option for travelers’ destinations and tourism. This was after the legal ending of apartheid in 1994.

President Cyril Ramaphosa currently rules the country. South Africa has three capitals Pretoria (executive), Bloemfontein (judicial), and Cape Town (legislative). South Africa has a population of 60,143,000; this is according to DataCommons. The form of Government practiced by South Africa is the multiparty republic with two legislative houses (National Council of Provinces and National Assembly). Furthermore, the country is quite distant from major African cities like Lagos, Nigeria, and Cairo, Egypt.

Now that we are familiar with brief facts about South Africa, we can go ahead and look at the top 10 places to visit in South Africa.

The first on our list of places to visit in South Africa is Cape Town. Cape Town also referred to as the Mother City, comes with beautiful beaches, stunning mountain views, and friendly people. The city is charming and breathtaking. If you eventually decide to visit South Africa, Cape Town has to be on your list.

Although Cape town is merely the country’s second-largest metropolis, it is arguably one of the most recognizable cities in the world. Cape town has stunning natural surroundings and a Mediterranean climate.

You can visit these places in Cape Town; The Table Mountain, the flat-topped peak presiding over the city. If you wish for a breathtaking overview of the city, you can hike to the summit and take the cable car up for a great panorama. The one-hour trek up Lion’s Head also offers panoramic views of the city. It would be challenging to have a clear picture of the city from just reading about it. I advise you to visit this beautiful city on one of your tours to South Africa.

The Kruger National Park is specifically for people interested in wildlife. The journey from Johannesburg to the Park is roughly a three and a half hours to four and a half hours drive. While driving towards the park, as a tourist, you can witness the “Big Five”: lion, leopard, buffalo, elephant, and rhino, as well as an incredible variety of other animals.

Also, you get to see the San (bushman) rock paintings and archaeological sites. One of the best parts of touring in the Kruger National Park is the accommodation you are provided with.

The Garden Route has some significant places to consider, like the charming town of Knysna, nestled between dense forests and a sparkling lagoon. It also has a beautiful Garden Route National Park. The park has beautiful gorges, tidal pools, and thick forests. There are also an Oudtshoorn’s ostrich farms and Cango Caves, and the Robberg Nature Reserve’s seal colony in Plettenberg Bay are just a few of the attractions.

Driving along the way can be very adventurous as you get the opportunity to experience elephants and even watch whales. Also, you can go bungee jumping and have a tree canopy tour.

Kgalagadi Transfrontier Park was established in 2000, and it is regarded as Africa’s first-ever proclaimed transfrontier park and one of the finest destinations to visit in South Africa.

The park has a vast wildlife diversity and a vast conservation area. You are likely to find the Kalahari lion in the park. Other predators present in the park include leopards, cheetahs, and hyenas.

The fifth place on our list of places to visit in South Africa is the Stellenbosch, Western Cape. Stellenbosch is located in the Cape Winelands region of South Africa’s western cape. It is the second oldest town in South Africa and was founded in 1679 by Simon van der Stel and is known for its Cape Dutch architecture, university, rugby, and wines.

The Stellenbosch is located in a rich valley surrounded by vineyards, orchards, and mountains. It is a farming and academic community. It is a mosaic of farms and presently a university town.  If you are a foodie, you will enjoy this town because it has some of the best South African restaurants.

It also possesses a museum, where you get to watch the display of essential works by South African artists.

When you witness the grandeur and majesty of these mountains, you will understand the purpose of such a dramatic name. The Drakensberg has a variety of waterfalls and hiking routes divided into two ranges, the northern and southern ranges. The Drakensberg has a warm climate which encourages hiking. There is hardly any snowfall in the Drakensberg. As a tourist, you can have fun enjoying a day or two hikes to the Amphitheater and exploring UKhahlamba Drakensberg Park and the Royal Natal National Park, home to Tugela Falls, the second-highest waterfall in the world.

The seventh place on our list of places to visit in South Africa in Durban. Duban is the busiest city in South Africa. Aside from other big cities like Cape Town and Joburg, Durban is another city with a lot to show.

Durban has enjoyable weather, and it possesses some famous sandy beaches with warm water from the Indian Ocean. If you are good at water surfing, you can have a good time surfing the beach water waves. Now, off the beach, Durban is also famous for its delicious curry. Surprisingly, Durban is home to the world’s largest Indian population outside of India.

The eighth place on our list of places to visit in South Africa is Hermanus. Hermanus is located in the western cape of South Africa. Initially, the town wasn’t for tourists until later. It is famous for watching whale dive.

Visitors may see these gregarious mammals up close on a 10-kilometer cliff-side path with built-in telescopes and benches, which is especially popular during the Hermanus Whale Festival in September.

Over the years, the park has become large enough to house five different sections with distinct features. One of the big delights here is seeing the Big Seven (South Africa’s iconic Big Five and southern right whales and great white sharks along the shore). Safari visitors will not be disappointed.

The tenth place on our list of places to visit in South Africa is the Cape Wineland. This is specifically for tourists who is a wine connoisseurs. The Cape Winelands, located just a few minutes drive from Cape Town, will blow your mind away.

With rolling vineyards and stunning mountain vistas from almost anywhere, it’s one of the most picturesque wine-producing regions in the world. In Cape Winelands, hundreds of wine estates provide everything from wine and cheese to biltong platters.

South Africa is just one country out of many other African countries with beautiful places to tour. If eventually you decide to pay a visit to South Africa, do well to visit at least one out of the many places listed above.