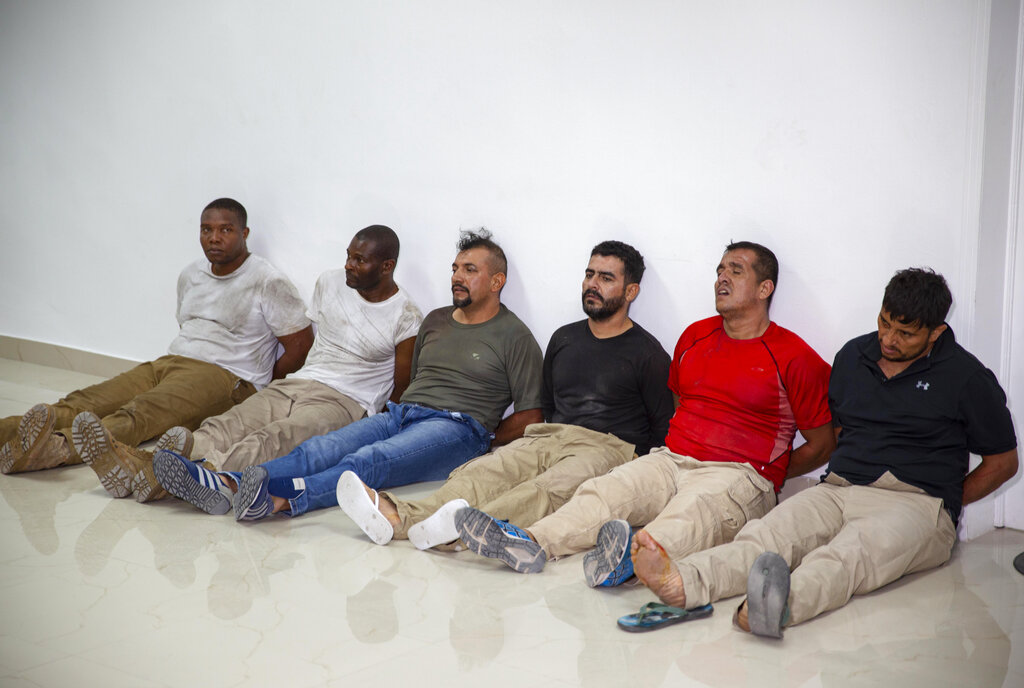 Suspects in the assassination of Haiti's President Jovenel Moise, among them Haitian-American citizens James Solages, left, and Joseph Vincent, second left, are shown to the media at the General Direction of the police in Port-au-Prince, Haiti, Thursday, July 8, 2021. Moise was assassinated in an attack on his private residence early Wednesday. (AP Photo/Joseph Odelyn)
Share
Facebook Twitter LinkedIn Pinterest Email

Léon Charles, chief of Haiti’s National Police, has revealed that that two U.S.-Haitian citizens are believed to be among 17 people detained in an investigation into the assassination of Haitian President Jovenel Moise; the 15 others are believed to be Colombian – at least six of whom Colombia’s government says are likely ex-army. We are going to bring them to justice,” the police chief said during the press conference; as the 17 handcuffed suspects sat on the floor nearby.

He also added that three other people had been killed and that police were still searching for eight more subjects.

According to Euronews, Colombia’s government has not released the identities of the suspects it believes to be former Colombian soldiers; but has ordered the high command of the army and national police to cooperate in Haiti’s investigation.

“A team was formed with the best investigators … they are going to send dates, flight times, financial information that is already being collected to be sent to Port-au-Prince,” said Gen. Jorge Luis Vargas Valencia, the head of Colombia’s national police. 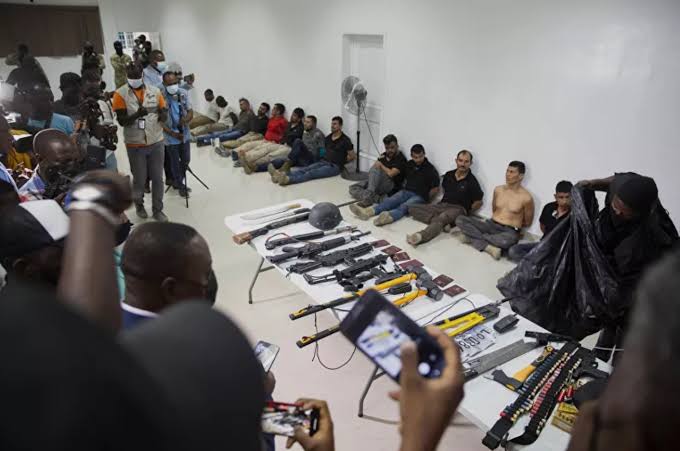 Meanwhile, the U.S. State Department said it was aware of reports that Haitian Americans were in custody but could not confirm or comment.

The Haitian Americans were identified by Haitian officials as James Solages and Joseph Vincent. Solages, at age 35, is the youngest of the suspects and the oldest is 55, according to a document shared by Haiti’s minister of elections, Mathias Pierre. He would not provide further information on those in custody.

Solages described himself as a “certified diplomatic agent,” an advocate for children and budding politician on a website for a charity he started in 2019 in south Florida to assist people in the Haitian coastal town of Jacmel. On his bio page for the charity, Solages said he previously worked as a bodyguard at the Canadian Embassy in Haiti.

Canada’s foreign relation department released a statement that did not refer to Solages by name but said one of the men detained for his alleged role in the killing had been; “briefly employed as a reserve bodyguard” at its embassy by a private contractor. He gave no other details.

The attack which took place on Wednesday, saw gunmen shoot the Haitian President dead inside his private residence. His wife was seriously injured and is currently being treated in hospital.

As a result, interim prime minister Claude Joseph declared a state of siege in the country.