Tyler The Creator, Shades The Grammys During His Grammy Awards Acceptance Speech, Calls It A Back-handed Compliment 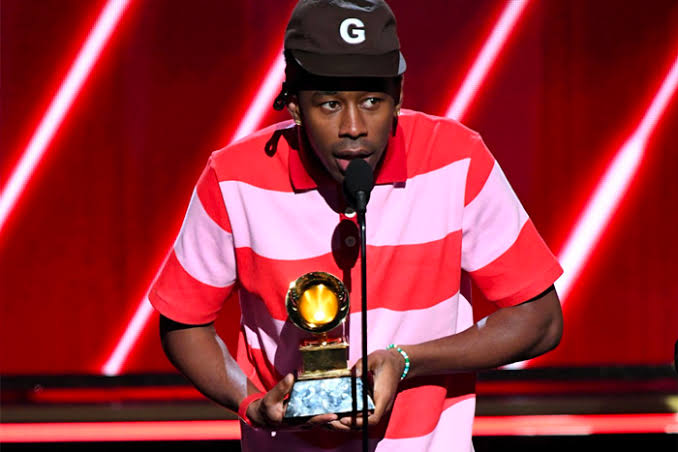 28 year old, Tyler Gregory Okonma known professionally as Tyler, the Creator: is an American rapper, singer, songwriter, and record producer. Tyler is the son of a Nigerian father with Igbo ancestry; and an American mother of mixed African-American and European-Canadian descent.

The creator won a Grammy for his most recent album IGOR. However, while he was truly grateful for the recognition, he had a few things to straighten up and get cleared. He didn’t mince words regardless of the recognition.

During his acceptance speech, Tyler expressed that the opportunity to have his music recognized is truly amazing because he does not consider himself a mainstream artist. However, Tyler The Creator did have a few criticisms for the nomination committee.

Tyler’s album was considered an urban rap album, which he says doesn’t feel genuine. He also says he doesn’t like the way the word “urban” is used in reference to black male artists.

“It also sucks that whenever we, and I mean guys that look like me, do anything that is genre bending, it’s always put into the rap or urban category,” he says. “I don’t like that urban word. It’s just a politically correct way to say the n-word to me.”

He continues his speech. Making it clear that he is very grateful for his project to have had such an impact; but says he isn’t too thrilled about the way nominations are perceived in regards to other black artists.

“I felt like half of me feels like the rap nomination was a back-handed compliment,” he says. “Like oh my little cousin wants to play the game. Let’s just give him the broken controller so he can shut up and feel good about it.”

Tyler was amongst some amazing nominees in the rap category, including Meek Mill.

Tyler the creator is an example of a “non-arse licker”: he has won a Grammy Award, MTV Video Music Award and The Wall Street Journal Award.