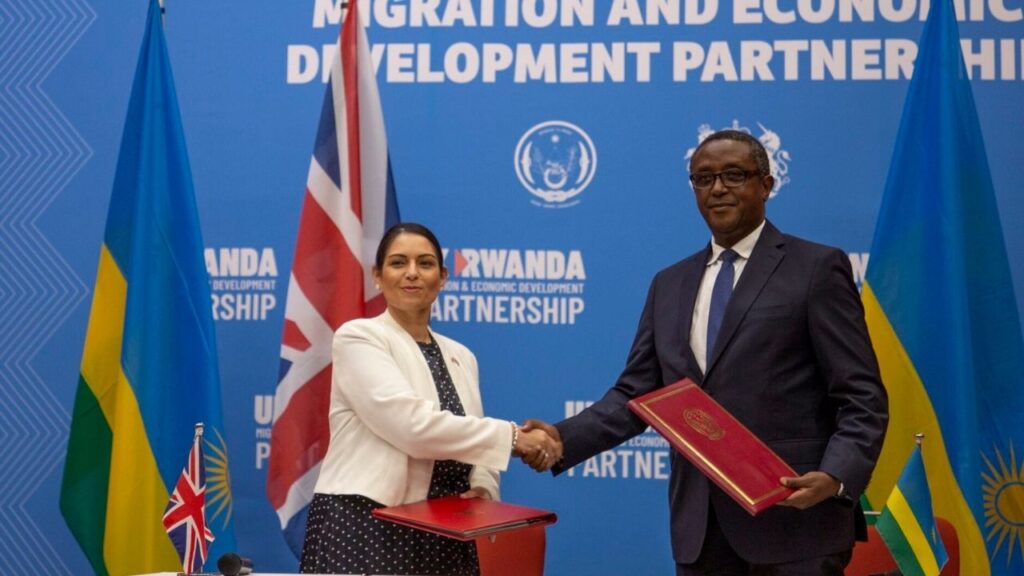 The UK announced a controversial new deal with Rwanda on Thursday to send some asylum-seekers thousands of miles to the East African country. A plan it said would stop people-smugglers from sending desperate migrants on treacherous journeys across the English Channel.

On Thursday, Prime Minister Boris Johnson called the scheme an “innovative approach, driven by our shared humanitarian impulse and made possible by Brexit freedoms,” adding that with the UK’s help, Rwanda will have the capacity to resettle “tens of thousands of people in the years ahead.”

According to Patel, the agreement’s goal was to improve the UK asylum system, which she described as facing “a combination of real humanitarian crises and evil people smugglers profiteering by exploiting the system for their own gains.”

Minister Vincent Biruta said in a statement that “Rwanda welcomes this partnership with the United Kingdom to host asylum seekers and migrants and offer them legal pathways to residence” in the East African nation.

Speaking at a joint news conference in the Rwandan capital of Kigali on Thursday, UK Home Secretary Priti Patel said that people relocated to Rwanda “will be given the support they need, including up to five years of training, integration, accommodation, and health care, so that they can resettle and thrive.”

In a speech near Dover in southeastern England, Prime Minister Boris Johnson said, “From today, anyone entering the UK illegally, as well as those who have arrived illegally since January 1, may now be relocated to Rwanda,”

Johnson was elected partly on promises to curb illegal immigration, but has instead seen record numbers making the risky Channel crossing.

The Rwanda plan swiftly drew the ire of opposition politicians who accused Johnson of trying to distract from his being fined for breaking coronavirus lockdown rules, while rights groups slammed the project as “inhumane.”

They should not be traded like commodities and transferred abroad for processing, “Gillian Triggs, the UNHCR assistant high commissioner for protection, said in a statement.

But critics, including opposition politicians and refugee organizations, have warned that the plan is unethical, unworkable, and overly expensive.

They have also raised concerns over Rwanda’s human rights record.

Many made the perilous crossing of one of the world’s busiest shipping lanes in small dinghies, making the journey unsafe for the journey.

In November, 27 people died while attempting to reach the UK when their boat deflated and sank, marking the worst disaster on record involving migrants and refugees trying to cross the channel from France.

Enver Solomon, chief executive of the UK-based charity Refugee Council, also slammed the move, calling it a “cruel and nasty decision” and predicting it would not stop people-smuggling gangs.”

Instead, the government should focus on operating an orderly, humane, and fair asylum system and developing safe routes such as humanitarian visas, rather than harming lives and destroying our reputation as a country that values human rights, “he added.

Defending the plan on Thursday, Johnson said he was confident it was “fully compliant” with the UK’s international legal obligations but expected it to be “challenged in the courts”.

Meanwhile, the deal with Rwanda will be funded by the UK to the tune of up to 120 million pounds ($157 million, 144 million euros), with migrants “integrated into communities across the country.”

The white cashier told Betty that she couldn’t take the money because it could possibly belong to her friend who allegedly visited the store hours before.