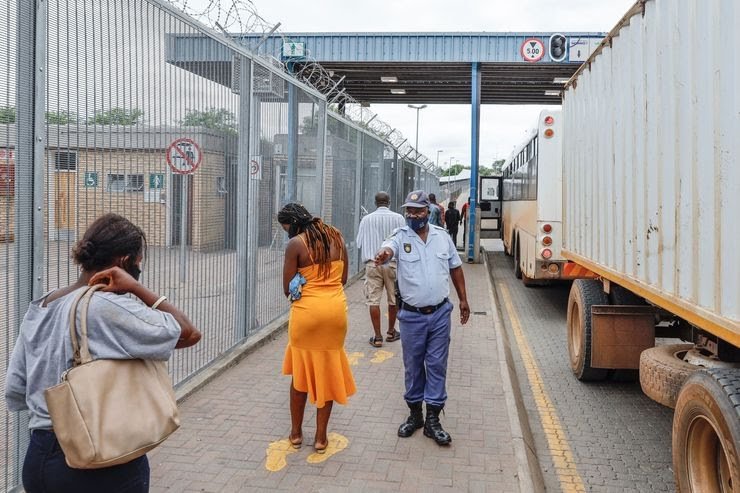 According o BloomBerg, South Africa’s decision to shut its land borders was preceded by a week of pandemonium as hundreds of thousands of foreigners tried to return to work after the December holidays.

Beitbridge, the only legal road crossing between Zimbabwe and South Africa — and southern Africa’s busiest inland border post — was the worst affected. People waited, not always patiently, for as long as four days in lines of traffic that stretched miles from the border gate with delays caused by the need to produce a certificate showing a negative test for Covid-19.

Without restrooms or restaurants, they relied on unmasked vendors selling homemade traditional street food, while the scrubby roadside bush made do as a communal and unhygienic restroom with little social distancing on the Zimbabwean side of the border.

The chaos was a demonstration of the disruption and economic damage the coronavirus is wreaking as South Africa battles to contain the spread of the coronavirus, which has infected more than 1.2 million people in the country and killed more than 33,000. In addition to delaying people from returning to work, the congestion curbed trade at Beitbridge, a key gateway to the rest of the continent for goods trucked from South Africa or its ports.

“It is on the trade route,” said Trudi Hartzenberg, executive director of the Tralac Trade Law Center in Stellenbosch, South Africa. “The transport and development corridors, going into the region and a single border closure has a knock-on, or a regional impact, which can be quite significant.”

The snarl-up meant that some reached South African immigration authorities after their COVID-19 test certificates, which have to be presented within three days of having being taken, had expired. Many had to spend days mingling with unmasked street vendors.

On average, Beitbridge processes about 25,000 people a day, according to Zimbabwe’s immigration department, but that number rises dramatically in January. Many of the 2 to 3 million Zimbabweans working in South Africa return home in December and the rush back to work in early January sees numbers spike. Adding to the congestion, both countries shut the border to private vehicles soon after nightfall to speed the processing of buses and trucks. Over 1,000 of them cross daily, customs officials said, mostly 40-ton rigs ferrying supplies to and from South African ports.