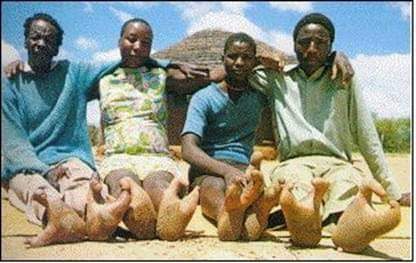 VaDoma is a Dema language speaking tribe in Zimbabwe that resides in the Kanyema area around the basins of the Zambezi River Valley. This secluded tribe believes their ancestors emerged from a baobab tree and walked upright to hunt and gather fruits. Because of this belief the VaDoma’s survive through hunting and gathering.

The VaDoma tribe is famous for having a rare genetic condition known as Ectrodactyly or the lobster claw syndrome. Ectrodactyly condition refers to a situation where one is born without one or two toes. When a child is born in this community they will in some cases come out with strange looking fingers whereby instead of the normal five toes, the kids will have either one or two toes missing.

This condition is said to affect the feet of only one in four children in a family. In addition to their two or three toes missing the children suffering from this condition will mostly have the present two toes turned inwards.  Ectrodactyly condition is genetic and any person that gets it at birth lives with it for the rest of their lives.

Unlike with many communities where people with such a condition would be considered disabled people experiencing this condition among the VaDoma tribe are not seen as disabled. Rather, it’s assumed that these toes make it easier for them to climb trees. To avoid spreading this condition to other tribes the VaDoma’s are not allowed to intermarry.

Other than the ostrich looking toes this tribe is also remembered as one that refused to join the Korekore Shona kingdom of Mutapa before Europeans colonized Zimbabwe.