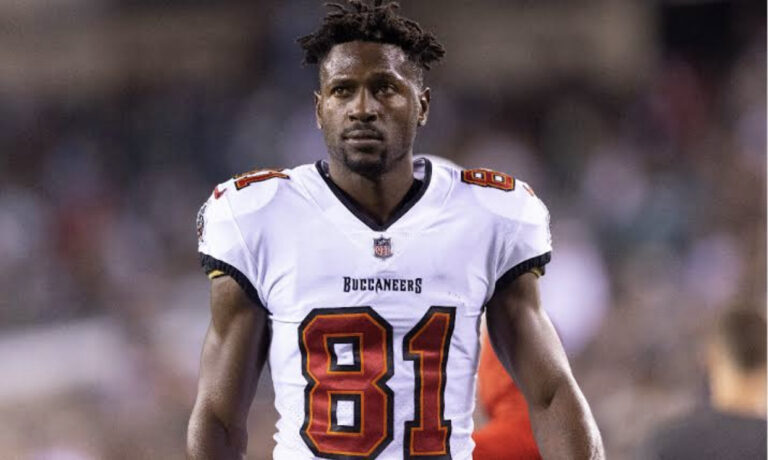 Wide-eyed tourists were shocked to see embattled All-Pro receiver Antonio Brown shove his bare buttocks into the face of a woman in a fancy Dubai hotel’s outdoor pool, then raise his manhood out of the water and whip it in her direction.

The woman originally laughed off the attention but quickly swam away to avoid the controversial Antonio in a video footage of the event at the Armani Hotel Dubai on May 14 as obtained by The Post.

Eyewitnesses claimed that Antonio Brown had just met the woman, who was irate following their encounter. Brown, whose past off-field antics have gotten him into trouble with the league and the law, and who is currently an NFL free agent after bizarrely leaving the Tampa Bay Buccaneers in the middle of a game last season, had just met the woman.

With the exception of the gold chains around his neck, Brown was naked as shown in one video as he huddled the pool’s edge with the woman.

He then plants both hands on the pool’s deck to lift himself out of the water twice — sticking his butt in the woman’s face both times.

She turns away, laughing off the apparent neutral zone infractions, as other men in the pool begin egging on Brown, yelling, “Yeah!,” “Another one!” and “AB!”

In the second video, Brown appears to startle the woman when he tries to tie a head scarf around her head. She’s able to snap off the scarf, which witnesses said he snatched from another swimmer.

Antonio Brown then lifts the woman up and tosses her head-first into the water like he was spiking a football, the shocking video shows.

The woman rises out the water, wipes her eyes, and swims to the other side of the pool — away from Brown.

One man quips, “He’s waterboarding her!” while another sarcastically responds, “He’s giving her the long board!”

Leaning along the edge of the pool’s interior, Brown then grabs his penis, and briefly yanks it out of the water in the direction of the woman, causing another man sitting and observing poolside to scream: “Oh my God!”

Two eyewitnesses told The Post that Brown continued to flaunt his private parts several times after the recording ended, rudely asking the woman: “You want it?”

The sources said the woman appeared visibly upset and was later spotted inside the hotel yelling and complaining to others about the incident.

Antonio Brown was asked to leave the hotel afterwards

A representative for the hotel declined comment and refused to reveal the woman’s identity.

Antonio Brown was asked to leave the hotel shortly after the incident, according to a hotel staffer who requested anonymity. The hotel had also received earlier complaints from other guests about Brown’s antics, the source said.

The complaints included Antonio Brown allegedly snubbing United Arab Emirates dress-code customs by flaunting his bare chest to guests inside the hotel, and smoking what they believe smelled like marijuana in his room, which would violate the country’s law.