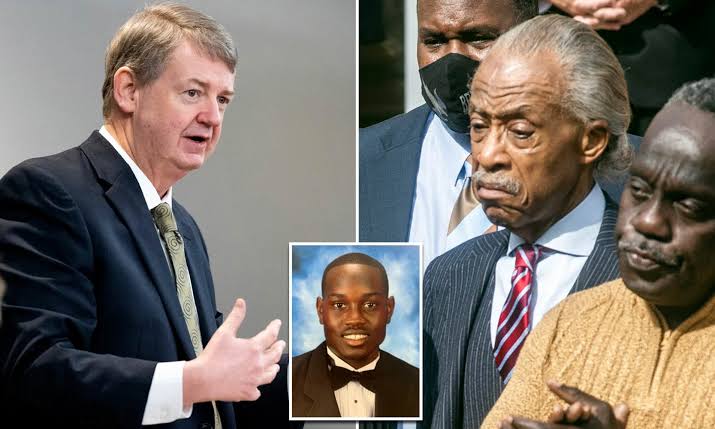 The defense attorney for one of the men accused of murdering 25 year old Ahmaud Arbery in February 2020; told a judge on Thursday that the presence of the Rev. Al Sharpton, who had been sitting with the victim’s family through the trial, could be “intimidating” to the jury. Kevin Gough, who represents one of three white men on trial for murdering Arbery, who was an unarmed Black man; in Georgia last year, raised concerns about the presence of notable Black pastors in the courtroom.

“The idea that we’re going to be serially bringing these people in to sit with the victim’s family one after another,” Gough said while the jury was not present. “Obviously there’s only so many pastors they can have, and if their pastor is Al Sharpton right now, that’s fine, that’s it, we don’t want any more Black pastors coming in here.” 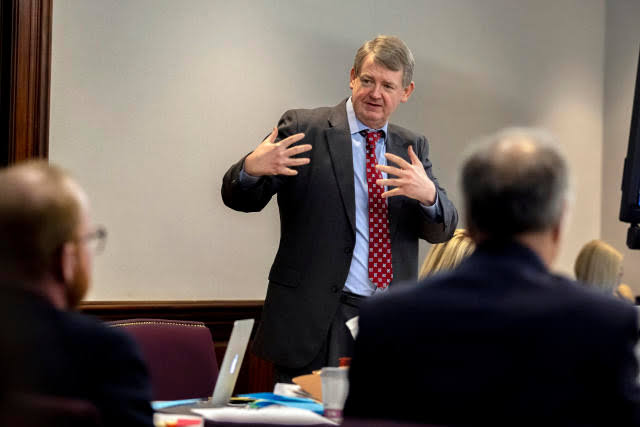 According to Yahoonews, Gough represents William Bryan, who along with Gregory McMichael and Travis McMichael faces charges of murder, aggravated assault and false imprisonment in the death of Arbery, who was chased and killed at the age of 25 while jogging in February 2020. They have pleaded not guilty to the charges.

“I have nothing personal against Al Sharpton,” Gough said. “It’s one thing for the family to be present, it’s another thing to ask for the lawyers to be present, but if we’re going to start a precedent starting yesterday where we’re going to bring high-profile members of the African American community to sit with the family during the trial in the presence of the jury, I believe that’s intimidating, and it’s an attempt to pressure.”

The defendants have stated that Arbery looked like a man accused of robberies in the area and that when they tried to speak with him, while they were armed, he attacked them. They claim they shot him in self-defense. Charges in the case were not filed until video of the killing was published, drawing outrage and comparisons to lynchings.

“Jesse Jackson, or whoever was in here earlier this week trying to influence the jury in this case. And I’m not saying the state is even aware that Mr. Sharpton was in the courtroom, I certainly wasn’t aware of it until last night,” Gough said, adding, “I think the court can understand my concern about bringing people in who really don’t have any ties to this case other than political interests.”

Gough then compared the presence of Sharpton to the potential attendance of a “bunch of folks dressed like Col. Sanders with white masks.” Prosecutors said it was a public courtroom, they didn’t know how Sharpton had come to be there and they had no part in his presence. The trial is taking place in Glynn County, Ga.

Judge Timothy Walmsley said he had been told that Sharpton would be taking a seat reserved for the family; and had no issues with it as long as Sharpton wasn’t disrupting the proceedings.

“I noticed him once and that was it, and the fact that nobody else even noticed he was in here means that everybody complied with the court’s rulings on sitting in this courtroom and listening to the evidence,” Walmsley said. “I don’t hear a motion, and I will tell you this, I’m not going to blanketly exclude members of the public from this courtroom.

If individuals, based on the limitations that we have in the courtroom, end up sitting in the courtroom, and they can do so respectful of the court’s process and in compliance with this court’s orders with regard to the order of the conduct of the trial, and they’re not a distraction, then I’m not going to do anything about it, and I did not hear from anyone that there was any distraction whatsoever.”

“I’m not even sure the jury would have seen him sitting there,” Walmsley said, adding, “Let’s not overstate what’s going on here, Mr. Gough.”

Gough had previously asked for a mistrial in the case, a request denied by Walmsley, and told the Atlanta Journal-Constitution that the jury needed more “Bubbas or Joe Six-Packs,” white men over 40 without college degrees like Bryan.

“We want a diverse jury,” Gough said last week. “But we’re missing a segment of what would normally be here.”