With her 10th Olympic medal, Allyson Felix Becomes The Most Decorated Woman In Track & Field 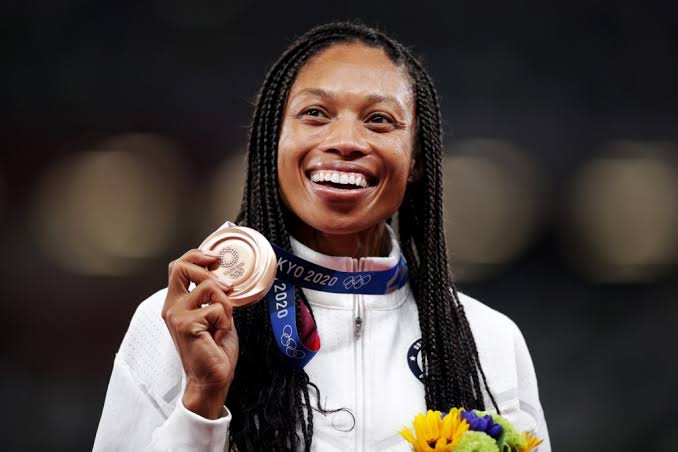 The 35-year-old California native, Allyson Felix just won a bronze medal to clinch her 10th medal in the Olympics. The athlete running blind out of lane 9, won bronze in the women’s 400 meters on Friday in a season-best 49.46 seconds.

Defending Olympic champion Shaunae Miller-Uibo of the Bahamas was the gold medalist in a personal-best 48.36 seconds; and Marileidy Paulino of Dominican Republic the silver medalist in 49.20 clocking, also a personal best.

She was on her back just after the finish line for several minutes after the race, and said it was partly exhaustion because the 400 “just does it to you.” But it was also emotion.

“Just joy. This one is very different, and it’s very special. And it just took a lot to get here,” she said. “I guess I don’t really rank [her medals] but this one is just so different. It’s my first bronze medal and it’s just, oh man, it’s hard to describe because I feel like all the other ones I was really just so focused on the performance and this one it just is so much bigger than that.

“All I can kind of explain it as is that I was out there running but I felt like I was a representation for so much more.”

The legendary athlete is one of the most decorated in her sport. She won a silver in the 200-meter in her Olympic debut as a teenager at the 2004 Athens Games.

Even if she wins another medal in the 4-x-400, totaling 11, she’ll come up one shy of Finnish runner Paavo Nurmi, who holds the all-time record for track and field medals with 12.

In 2019, just 10 months after giving birth to her daughter, Allyson Felix broke the record for most gold medals of any athlete at the track and field world championship, when she clinched her 12th and 13th world titles.