10 Best Places To Go In Africa In February 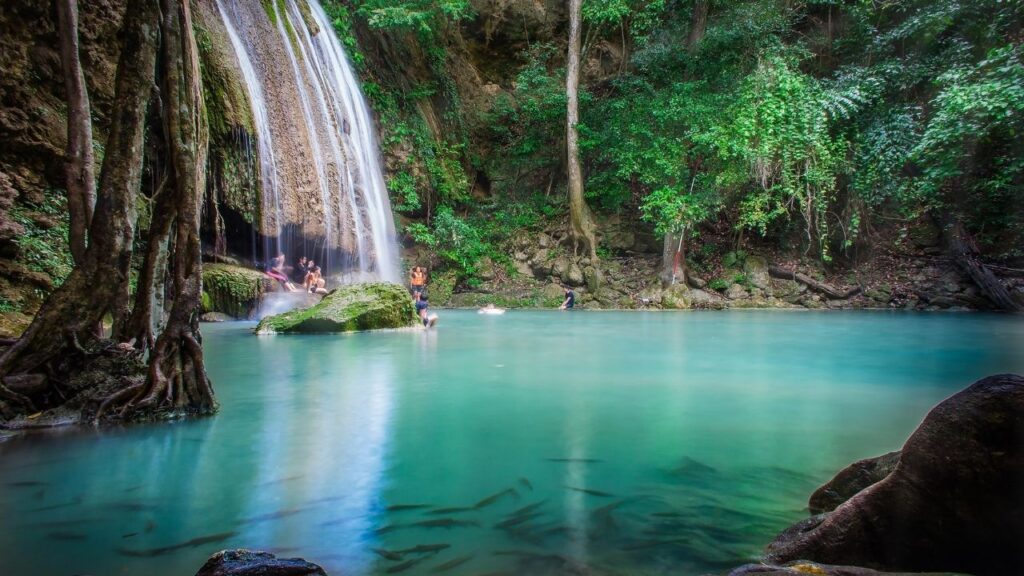 When visiting the home of civilization, you can’t help but sense the continent’s intensity. In this guide, we’ve compiled a list of the 10 best places to go in Africa in February.

Africa is a vast continent with each country having its own distinct energy and culture.

We witnessed it evolve before our eyes as we cycled from Cairo to Cape Town. From the dry deserts of the Sahara and Nubian deserts in the north to the lush jungles of Zambia and the amazing plains of East Africa, there’s something for everyone.

The 10 best places to go in Africa in February

Africa has snatched our hearts, and it will snatch yours as well. The 10 best places to go in Africa in February are:

Madagascar, known as the eighth continent because of its magnificent and unusual species, is perhaps best known for its lemurs.

The island nation, however, is home to some of Africa’s best beaches, with Nosy Be Island being the most popular among beachgoers.

The island, which is located off Madagascar’s northwest coast, has various lengths of pure white sand to pick from, the most stunning of which being Andilana (on the northwest tip).

The islets that surround the main island offer plenty of beautiful beaches as well.

When (if) you’ve worked up enough of a tan, Nosy Be’s island lifestyle also provides lots of adventure.

Snorkeling and scuba diving are popular activities in Nosy Be, especially near Nosy Tanikely’s pristine reefs.

From September to December each year, Les Baleines Rand’eau offers a snorkeling excursion where you may swim among whale sharks.

On land, Lokobe National Park offers close encounters with some of Madagascar’s most charismatic lemur species.

The Sahara is certainly Africa’s most well-known desert, but there are some stunning desert vistas further south as well.

The Sossusvlei dune sea, located in the middle of Namibia’s Namib Desert, is one of the country’s finest natural assets.

The force of strong winds pouring ashore from the Atlantic Ocean has sculpted ocher-colored dunes that rise skywards in amazing shapes over millions of years.

Some of these sand dunes are competitors for the title of the world’s tallest.

The dunes are a photographer’s paradise, especially in the early morning and late afternoon light.

The iconic dawn ascent of Dune 45 is a highlight for many tourists to Sossusvlei.

You’ll climb in the chilly semi-darkness, then arrive at the dune’s peak just in time to see the sunrise over the horizon, bathing the surrounding countryside in blazing red, pink, and gold hues.

The Nile is Africa’s longest river and, according to most authorities, the world’s longest.

On its way to the Mediterranean Sea, it passes through 11 nations, but Egypt is by far the most well-known location for Nile river cruises.

This is due to the fact that an Egyptian river tour allows you to explore several of the country’s most recognizable ancient landmarks.

Boats travel the river between Luxor and Aswan in the same way that traditional feluccas have for millennia.

The best cruises include a trained Egyptologist guide who can teach you about each building’s history as well as the mythology that influenced its design.

There are a variety of cruise ships to choose from. Ranging from budget-friendly to opulent, and from classic steamships to modern liners, you are limitless.

Another worthy place to go to in Africa around February is the Volcanoes National Park. The park is on the boundary of Uganda and the Democratic Republic of the Congo and covers around 60 square miles of the Virunga Mountains.

There is just one reason to go: to view mountain gorillas in their native habitat, which is a once-in-a-lifetime opportunity. There are little over 1,000 mountain gorillas left in the wild, according to the IUCN Red List.

These remarkable primates are among our closest cousins, sharing more than 98 percent of our genetic DNA.

There are ten habituated gorilla populations in Volcanoes National Park, which means they are used to humans and allow for incredible close interactions.

For the safety of the gorillas, these encounters are tightly restricted; you must request permission well in advance.

To discover the gorillas, you’ll have to journey through the misty cloud forest on foot, which is an unforgettable experience in and of itself.

Allow enough time to visit the Karisoke Research Center, where famed primatologist Dian Fossey worked for the majority of her life.

The Okavango Delta is a seasonal flood plain in northern Botswana that is known for its remarkable biodiversity.

It’s nourished by the Okavango River, which bursts its banks at the conclusion of the rainy season in April or May, bringing life-giving water and nutrients to the otherwise parched Kalahari Desert.

The Delta is a remarkable spread of lush green plains, woodlands, and marsh-like streams that covers over 8,500 square miles at its annual height.

A classic dugout canoe is a perfect way to explore after flying into your camp. Spend a few nights under the stars on one of the Delta’s uninhabited islands for an extraordinary glimpse into life in the African bush.

Listen for the cries of the 160 distinct animal species that call the Okavango home in the nighttime.

The Big Five and one of the world’s largest populations of endangered African wild dogs are among them. Birders will enjoy over 530 species, many of which are unique to the region.

The Serengeti, another popular African attraction, is located in Tanzania. It shares unfenced boundaries with Kenya’s Masai Mara National Reserve, which is located in the country’s far north.

The annual Great Migration of several million wildebeest, zebra, and other antelope, which takes place in both parks, is one of nature’s most spectacular phenomena.

From December to July, the Serengeti is the greatest place to observe the herds on the move, but make sure to check which part of the 5,700-square-mile park is currently active.

Even if you miss the migration, the Serengeti is a spectacular safari location. It is a UNESCO World Heritage Site because of its biological value, and it has Africa’s highest concentration of plains game.

The Serengeti attracts a significant number of predators due to the quantity of antelope, zebra, and other ungulate species, making it one of the greatest areas on the continent to see lions and leopards.

With luck, you’ll be able to view all five of the Big Five (rhinos are notoriously difficult to spot).

All these and more make the Serengeti National Park one of the 10 best places to go in Africa in February.

Africa is a continent of superlatives, and Mount Kilimanjaro is the next on our list.

With a height of 19,341 feet, it is Africa’s highest peak and the world’s tallest free-standing mountain. It is located near the Kenyan border in Tanzania.

Kilimanjaro is also one of the few world-record-holding mountains that can be climbed without specialized equipment or training; anyone with a reasonable level of fitness and the correct attitude can fairly expect to reach the summit.

Next, because altitude sickness is the leading cause of summit failures, it’s a good idea to choose a longer route with a more steady ascending rate.

You’ll pass through five different climate zones on your way up the mountain, ranging from rainforest to alpine desert.

A spectacle that may stun first-time visitors to Africa awaits at the summit: snow and ice!

The next place to add to your list of places to visit in Africa is Victoria Falls. Victoria Falls is an obvious starting point for your first African vacation if you’re interested in natural occurrences.

The waterfall spans the border between Zimbabwe and Zambia and plunges 354 feet into the gorge below. It has also been named one of the Seven Wonders of the Natural World.

Victoria Falls is the world’s largest waterfall, with over 500 million liters of water gushing over the edge per minute during peak flood season. It is, however, not the world’s highest or broadest waterfall.

The waterfall’s original name, Mosi-oa-Tunya, meaning The Smoke That Thunders, comes from the curtain of spray that can be seen from 30 miles away.

Walking trails around Victoria Falls National Park lead to a succession of viewpoints that provide superb frontal views of the Main Falls if you visit from the Zimbabwean side.

The Zambian section of the falls has fewer perspectives, but it does provide the adrenaline rush of swimming in the Devil’s Pool, which is located on the extreme brink of the falls.

Travel to Cape Town for a cultural getaway on the other side of the continent.

It’s often rated one of the most beautiful cities in the world. It is surrounded on two sides by the ocean and dominated by the distinctive silhouette of Table Mountain.

In the Mother City, there is something for everyone. Culture vultures will enjoy the art galleries, museums, and concert venues, while the world-class restaurant scene is inspired by South Africa’s abundant produce and the wines of the adjacent Cape Winelands.

Whether you spend your time on the white sand beaches of Camps Bay and Blouberg or on a breathtaking drive along the Cape Peninsula, natural beauty abounds.

The historical landmarks of Cape Town are the main draw for many visitors.

Take a ferry to Robben Island to view the jail where Nelson Mandela was imprisoned for 18 years, or explore the colorful Bo-Kaap district to learn about Islamic culture.

Consider taking a township tour to learn more about the apartheid era’s atrocities and consequences.

Those interested in North Africa’s unique culture and history will find plenty of both in Morocco’s most famous of four Imperial Cities.

Marrakesh was founded in 1062 by the Almoravids and has amassed a magnificent collection of mosques, palaces, tombs, and museums over the years.

The Saadian Tombs, where members of the royal Saadian family are buried; the El Badi and El Bahia palaces; and the medieval Ali Ben Youssef Medersa are among the top historical attractions.

The best way to get a sense of Marrakesh is to take a trip around Medina. Medina is known as the city’s historic walled city

Stop by the souks for a cup of mint tea, to negotiate over a purchase, or to observe artisans at work employing centuries-old skills.

Book a room in a traditional Moroccan riad for the most authentic experience.