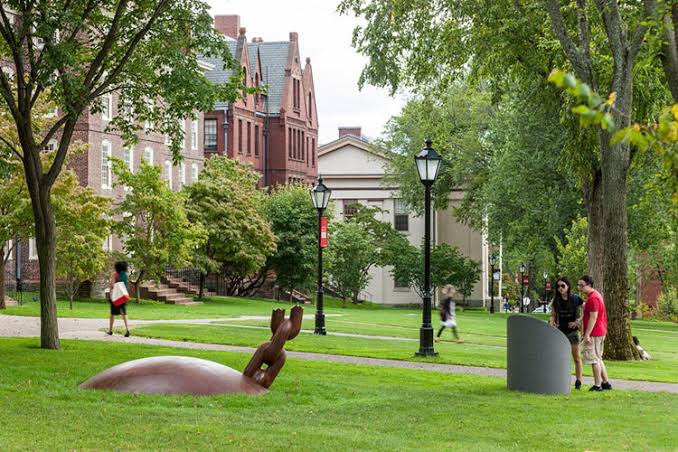 It is not news that enslaved Africans built what America is today. From railroad tracks to several inventions; Africans who were forcefully shipped to the Americas and their descendants are the cornerstone of development. Although, largely hidden by the mainstream whitewashed media, this article highlights 10 universities and colleges built by enslaved Africans.

It is indeed painful that when it comes to Education, Racism and discrimination prevented them from reaping the fruits of their contributions. “The story of the American college is largely the story of the rise of the slave economy in the Atlantic world,” says Craig Steven Wilder, a historian at MIT and author of “Ebony and Ivy: Race, Slavery, and the Troubled History of America’s Universities.”

The contributions of enslaved Africans cannot be overstated. It is worthy of note that, returns/profits from slavery and related industries helped fund some of the most prestigious schools in the Northeast of United states including; Harvard, Columbia, Princeton and Yale. And in many southern states, including; the University of Virginia enslaved Africans built college campuses and served faculty and students.

Nearly 60% of the school’s founding trustee members of this small Pennsylvania liberal arts college were slave owners. This school’s history with slavery is complex. At the school’s conception, some of its high-profile students including; John Dickinson, Benjamin Rush, and James Wilson were also enslavers who renounced slavery later on.

As one of the universities and colleges built by enslaved Africans, the school also commemorated well-known enslavers and proponents of slavery; John Armstrong, James Buchanan, Thomas Cooper, and John Montgomery by naming buildings around campus after them. In 2019, the school announced the Dickinson and Slavery project to understand the school’s history with slavery. In March, the school administration agreed to change some of the names of the buildings that were names after enslave us including Cooper Hall.

The oldest, most revered, university in the world is also a beneficiary of slavery and one of the universities and colleges built by enslaved Africans. However Harvard’s involvement varied: some of Harvard’s early presidents had slaves live and work on its campus; Donors of the school made their fortunes through  the slave trade and slave labor. In 2017, Harvard President Drew Faust honored Titus, Venus, Bilhah, and Juba, the enslaved people who lived and worked on the campus, with a plaque in Harvard’s Wadsworth House.

In 2011, professor Sven Beckert,  Katherine Stevens, a then graduate student, as well as the students of the Harvard and Slavery Research Seminar published a report about Harvard University and its ties to slavery.

They were inspired by the work of Ruth Simmons at Brown University and began work in 2007. They began by locating Harvard’s ties to slavery in the larger concepts of American slavery, Northern slavery, and Triangular Trade. The report notes that, “by the mid-seventeenth century, slaves were part of the fabric of everyday life in colonial Massachusetts. They lived and labored in the colony. Their owners were often political leaders and heads of prominent families.”

One of the universities and colleges built by enslaved Africans is the Brown University.
This ivy league institution’s ties to slavery lies in its founders; the Brown family. Rhode Island dominated the North American share of the African slave trade and with its residents benefiting from it; and the  Brown family was no exception, they engaged in the trans-Atlantic slave trade benefiting the school.

Brown launched its investigation into the school’s history with the slave trade in 2003. They have also launched the Center for the Study of Slavery and Justice to continue research and academic study on slavery in North America.

Brown university’s oldest building, University Hall, maintains a number of connections to slavery. Prominent Newport merchant and slave trader Aaron Lopez donated timber to the building project while the company of fellow slave trader Nicholas Brown, Sr. led the construction. The workforce involved in the construction of the university building was diverse, reflecting the ethnic and social admixture of colonial Providence’s population. Enslaved Africans, free people of color, indigenous people, including white skilled and unskilled laborers worked to erect the structure. However, a bulk of the work was done by enslaved Africans.

This university was not only built with slave labor but in 1838, 272 enslaved men, women and children were sold by Georgetown Jesuit priest; to Louisiana to help finance the school and pay off some students’ debt.

In 1838, 272 the Maryland Province of the Society of Jesus, which ran, among other schools, the Georgetown College, sold 272 slaves. About 10% of the proceeds from the sales of slaves was used to satisfy Georgetown’s debts. The slaves had lived on plantations belonging to the Jesuits in Maryland, and they were sold to Henry Johnson and Jesse Batey. The sale price was $115,000, equivalent to $2,926,391 in 2021. Of the $25,000 down-payment, $17,000 was used to pay down building debt that Thomas F. Mulledy, the provincial superior who orchestrated the sale, had previously accrued as Georgetown’s president.

In April 2019, Georgetown students had to pay reparations to the descendants of enslaved Africans by way of a fee for undergraduate students.

Princeton university is on our list of universities and colleges built by enslaved Africans.

Sixteen out of Princeton University’s first twenty-three trustees “bought, sold, traded, or inherited slaves during their lifetimes” and the school also had “deep and intimate ties to human bondage.”

Additionally, the first nine presidents of Princeton University enslaved black people. Upon the death of its fifth president, Samuel Finley, in 1766, the people he held captive were auctioned on campus.  Princeton university also had connections to the colonization movement which aimed to stop the Atlantic Slave Trade but also repatriate emancipated slaves to Africa as they were perceived as a burden on public resources.

White supremacy and structural racism at Princeton did not end with the end of the slavocracy. Princeton President Woodrow Wilson (1902-1910), was an avowed white supremacist

On our list of universities and colleges built by enslaved Africans is the popular Yale University which was named after a slave trader.

Yale University is named after slave-trader and merchant Elihu Yale. According to historian Craig Steven Wilder, Yale also “inherited a small slave plantation in Rhode Island that it used to fund its first graduate programs and its first scholarships… [the university] aggressively sought out opportunities to benefit from the slave economies of New England and the broader Atlantic world.”

Yale university established in 1998 the Gilder Lehrman Center for the Study of Slavery, Resistance, and Abolition at the MacMillan Center for International and Area Studies.

The legacy of slavery at Yale was addressed in the February 2002 edition of the Yale Alumni Magazine.

This university is on our list of universities and colleges built by enslaved Africans because, the founders, benefactors, trustees, of the. University of Pennsylvania and faculty included slave owners. Among these were the university’s founder and first president, Benjamin Franklin, who also profited from and facilitated the slave trade by running advertisements for the sale of enslaved people in his newspaper, the Pennsylvania Gazette.

The university began the Penn & Slavery Project in 2017 to explore the connections of its funders, trustees, and faculty to slavery as well as uncover the stories of people enslaved by them. Among the trustees of the university who enslaved people were John Cadwalader, Benjamin Chew, Benjamin Franklin, Isaac Norris, William Plumsted, James Potter, Joseph Reed, and Thomas Willing.

Prior to this  discovery, the university had held its founder was a “strong abolitionist,” based on the representation of Hopkins in a 1929 publication written by his grandniece and published by the school’s press, with the main claim being that Johns Hopkins’ parents freed all their slaves by 1807.

Many also pointed to his specification that people of any race should be cared for in his hospital and his encouragement for the trustees of the hospital to establish an orphanage for black children. This information may have remained unknown for so long due to the fact that most of Hopkins’ personal papers were destroyed or lost since his death.

The University of Virginia in Charlottesville, Virginia owned and rented slaves for decades. Horrifyingly, between 1817 and 1865, approximately 4,000 enslaved people worked on the University of Virginia’s campus. All of the men involved in the founding of the university were slaveowners, thereby stamping its place as one of the universities and colleges built by enslaved Africans.

These enslaved Africans maintained the university’s grounds, worked to construct buildings, served the students and faculty, and sometimes lived in quarters below student residences.

Also, the majority of students during this period were able to attend due to the wealth of their slave-owning families, though these students were not permitted to bring their own slaves.

The founder of University of Virginia, Thomas Jefferson, enslaved over 600 people in his life time.

Dartmouth college’s founder Eleazar Wheelock enslaved at least 18 black people during his lifetime. Eight slaves accompanied Wheelock when he and his pupils set out to establish Dartmouth’s Hanovercampus in 1770. This college is one of the universities and colleges built by enslaved Africans.

According to Craig Wilder “there were more slaves than faculty, administrators, or active trustees; in fact, there were arguably as many enslaved black people at Dartmouth as there were students in the college course, and Wheelock’s slaves outnumbered his Native American students.”

Dartmouth College president Nathan Lord defended slavery in the lead up to the American Civil War, causing controversy and leading to his eventual resignation.