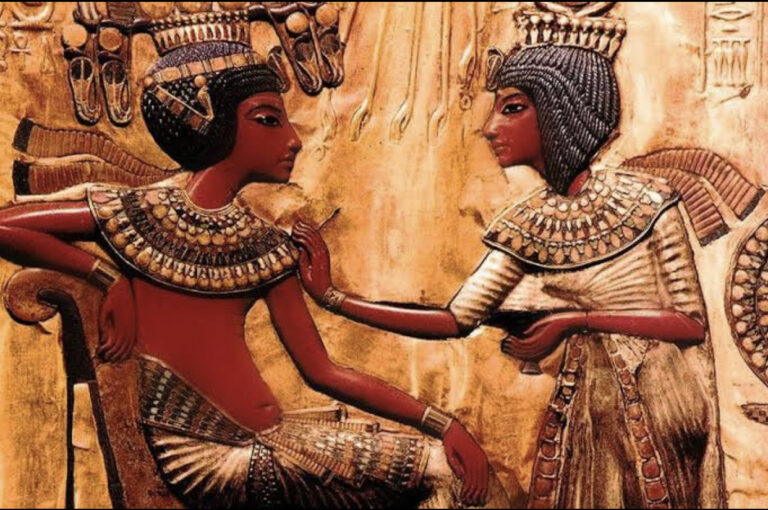 There are several fascinating things about ancient Egypt that you do not know. In our previous article, we detailed the age of pyramids in the old kingdom of ancient Egypt and in this article, you will be learning about the love life of Ancient Egyptians, and their culture surrounding sex and love—some of whom maybe considered strange, based on the period in history.

This article concentrates on the 10 Weird Facts about the romance of Ancient Egyptians.

Women were revered among the ancient Egyptians, birth control was widely practiced, and premarital sex was commonplace. In fact, much like eating and sleeping, having sex was a normal pastime for these ancient Egyptians. Nothing needed to be avoided or embarrassed of. They used a variety of sex expressions as well. Sex was a part of the grand cycle of creation, life, death, and reincarnation.

The Egyptians had an afterlife marriage doctrine.

Ancient Egyptians thought that marriage would continue after death, or in the afterlife, even though it was designed to endure a lifetime. Males typically only lasted into their thirties, although women frequently gave birth to children as early as sixteen and generally lived slightly longer than men.

The possibility of seeing one’s spouse again might have helped to reduce the grief of death if the couple had a strong bond. According to tomb murals and inscriptions, the couple is depicted in the Field of Reeds having fun together and engaging in the same pastimes they did on earth.

Making one’s life as pleasant as possible on earth so that one may enjoy it indefinitely was a goal of the Ancient Egyptians, who believed in eternity. This belief served as a crucial foundation for a marriage. The prolongation of one’s life was the only concept of “heaven” to the Egyptians; there was no heavenly realm.

The ancient Egyptians used a range of contraceptive methods to prevent unintended pregnancies. The most effective contraceptives were found to be honey, acacia, and colocynth. Egyptian women would soak linen in the mixture and place it in their privates before having sex.

Acacia contains lactic acid, which has been shown to be a spermicide by science. Scientists have also established that colocynth naturally induces abortions. Arab women in the present day continue to use colocynth as a contraception.

A combination of crocodile dung and fermented bread was used as an Egyptian contraceptive that was injected into a woman’s privates. The feces was chemically useless, yet it served as a diaphragm.

Breastfeeding was a tried-and-true method of contraception for up to three years. Lactation suppresses ovulation, which prevents pregnancy. Ancient Egyptian men made an effort to avoid unintended pregnancies as well. They were one of the first to use condoms coated in linen.

There were no negative societal effects of being divorced.

It was both possible and acceptable to get a divorce. The most frequent reasons for divorce were infertility, infidelity, and abuse. The divorce procedure was simple. After one of the spouses left, the property was divided. Both men and women have the option of getting a divorce.

Egyptian women had a fair amount of independence. They would be able to rapidly get a divorce and get married again as a result. The ancient Egyptians, however, believed that women above thirty were infertile, hence it was not feasible for them to remarry. In any case, getting a divorce had no shame attached to it.

The way the ancient Egyptians ignited passion was peculiar.

A spouse might seek medical attention if his passion for his wife had waned. He would receive a special prescription from the doctor to give to his wife. The mixture also contained semen, blood from a black dog’s tick, a drop of blood from the husband’s left ring finger, and dandruff from a dead person’s scalp.

This elixir was claimed to cause a wife to rediscover her love for her spouse. If he could get her to drink this nasty drink, she had to adore him.

Men who had trouble getting an erection had to rub their privates with a mixture of honey and ground acacia seeds. If this tactic didn’t work, the man would have to rub a stallion’s mouth foam against his manhood.

Women in ancient Egypt received equal regard as men.

Men and women had equal rights in every area, with the exception of occupation. In actuality, in ancient Egypt, both male and female children were coveted. There is no bias.

Only housekeeping, sewing, and cooking were offered as careers for women. However, they supported their husbands’ agricultural job. The wives ran the family farms while the husbands were away.

Women had the right to own and inherit property. They had the freedom to run their own enterprises. They might appear in court to present their case. The freedom to travel, engage in extramarital affairs, adopt children, and even divorce their husbands were all rights granted to ancient Egyptian women.

It’s noteworthy to note that women were also pharaohs. Although not frequently, this did occur. The most illustrious illustration is Queen Hatshepsut. On the other hand, royal ladies may have a lot of power through their husbands. For instance, Nefertari, the wife of Rameses II the Great, was one of the most influential people in ancient Egypt.

Women had more rights in ancient Egypt than in other cultures, even in contemporary countries. When the Greeks conquered Egypt in 332 BC, Egyptian women really enjoyed a great deal more freedom and civic freedoms than Greek women.

Weddings were quite simple.

The ancient Egyptians had no concept of a wedding ceremony. A woman recently moved in with a man and told her parents about the arrangement. Once they shared a roof, they were considered husband and wife.

The ancient Egyptians expected couples to remain devoted to one another while bearing numerous offspring. The couples were frequently genuinely in love.

Also, contrary to popular perception, the ancient Egyptians did not marry their relatives. There were no weddings of cousins, sisters to brothers, or daughters to their fathers.

Only the royals got married or had incestuous connections. Due to incest, their offspring were born with significant genetic defects. Royal inbreeding was well-known to have occurred under Pharaoh Tutankhamun.

The ancient Egyptians didn’t care if a woman was a virgin or not. Back then, they didn’t even have a word for a virgin. Premarital sex was legal as long as it occurred between unmarried partners.

It’s interesting to note that after getting married, the pair had to remain true to one another. Adultery was taboo in Egyptian culture. Adulterous behavior resulted in a divorce. The use of whipping, mutilation, or even death as punishment is possible.

A husband typically got away with having sex with another woman, especially if she was unmarried. On the other side, a wife had to be faithful to her husband. It was the only way to establish the legality of their offspring.

An experimental marriage may be requested by a couple.

An incredibly strange fertility test was used by the ancient Egyptians. A woman had garlic placed in her vaginal canal. If the smell of garlic was on her breath, she was fertile.

However, not all males were convinced by the operation. Therefore, Ancient Egyptian men engaged in trial unions to stay away from marrying infertile women. Normally, the testing phase lasted a full year. When a lady became pregnant and the pair got married, the experiment came to an end.

Homosexuality may have been ignored in Ancient Egypt

What the ancient Egyptians thought of homosexuality is still a mystery. Any papers or literature that include descriptions of sexual actions never declare the sexual act’s nature overtly; instead, they rely on indirect paraphrase. There is little any information available about sexual orientation and homosexual behavior, and there are no laws that specifically prohibit it.

Ancient Egyptian writings never directly referred to same-sex unions as repugnant or abhorrent. There is no proof that gay behavior was punishable in prehistoric Egypt. A direct evaluation is therefore still challenging.