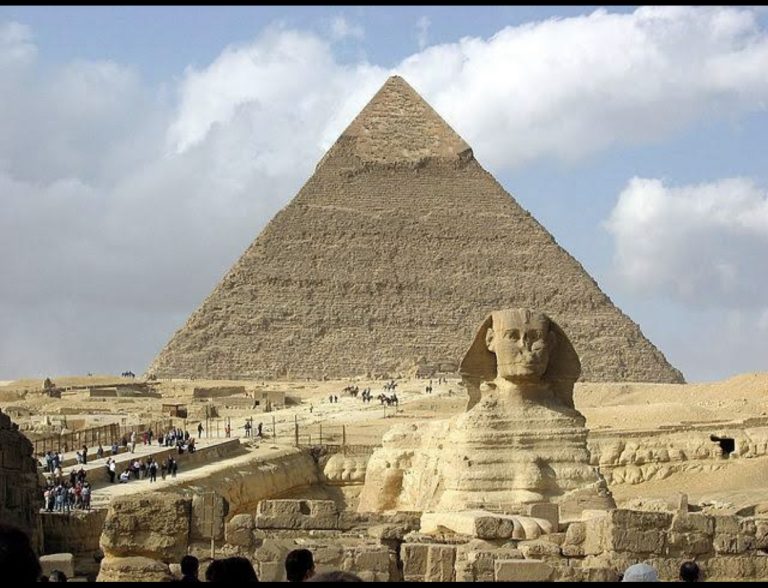 The Old Kingdom of Ancient Egypt (ca. 2649–2130 B.C.) is the foundation upon which all of Egypt’s long and storied history has been built. This period from 2686 to 2181 BC, was when people living in the Nile Valley first began to produce the art and architecture that we still count among the most impressive ancient feats in history. The old kingdom of Ancient Egypt consists of small regional chiefdoms with separate gods, rulers and government before the old kingdom establishment.

The “Old Kingdom” is a timeline in ancient Egypt, it was a time in ancient egypt from 2575 BC to 2150 BC which consists of the 4th, 5th, 6th, 7th and 8th Dynasties with 25 Pharaohs. However, the fourth and fifth dynasty  were the main old kingdom dynasties while some archaeologists consider the third dynasty as a critical period in the history of ancient Egypt.

The old kingdom was an incredibly dynamic period of Egyptian history, and while the origin of many concepts, practices, and monuments can be traced to earlier periods, it was during the Old Kingdom that they developed into the forms that would characterize and influence the rest of pharaonic history.

A good number of broad artistic, historical, and religious trends distinguished this old kingdom of ancient Egypt period. Yet, the specific elements and manifestations of these overarching attributes changed dramatically over time, and the end of the Old Kingdom differed remarkably from the beginning of the old kingdom.

The Dynasties of the old kingdom of ancient Egypt.

Although there are several important settlement sites that provide some insight into everyday life of this period, our knowledge of Old Kingdom material culture is largely based on funerary evidence.

The 3rd dynasty began with king Netjerikhet (r. ca. 2649–2630 B.C.), who would later be called Djoser. Djoser’s funerary complex at Saqqara exemplifies the notable architectural and cultural developments that occurred during his reign. This funerary complex was the earliest stone structure in Egypt, and at its center stood Egypt’s first pyramid, the Step Pyramid. This complex consisted of multiple cult buildings and an enormous series of underground apartments within a large rectangular enclosure that was oriented from north to south.

Symbolically, this complex aligned the deceased king with the circumpolar stars and the gods, which enabled him to eternally celebrate the rituals of kingship, and provided a place for his funerary cult to be performed.

The high officials of this dynasty built mud-brick rectangular superstructures, known today as mastabas, above their tombs in Saqqara, continuing the practice of the previous dynasty. In many of these superstructures, what had before been offering niches were enlarged into small chapels that were lined with stone and decorated.

An offering scene, which depicted the tomb owner seated before a table of bread, with lists of food and other provisions, was usually depicted inside the chapel. This scene magically provided for the deceased king in the afterlife, thus guaranteeing his continued existence. Such scenes were always present  for the remainder of Egyptian history.

In this dynasty, Pyramid building reached its height. This was during the reign of Snefru (r. ca. 2575–2551 B.C.), who had three massive pyramids constructed in Meidum and Dahshur, and then transformed the stepped pyramid into a true, smooth-sided one. The Great Pyramid at Giza, which is the largest Egyptian pyramid, belongs Snefru’s son and successor, Khufu (r. ca. 2551–2528 B.C.).

Around this time of the old kingdom of ancient Egypt, the basic elements of the pyramid complex became standardized. These were aligned along an east-west axis and included the pyramid itself in the west marking the king’s tomb; the pyramid temple (also sometimes referred to as the funerary temple or the mortuary temple), which was directly adjacent to the east side of the pyramid; the valley temple in the east and at the edge of cultivation; and the causeway, which connected the temples and led from the cultivation toward the pyramid in the desert.

While these elements for the pyramids were reproduced with remarkable consistency throughout the rest of the Old Kingdom of ancient Egypt, the plan of each element could vary widely. The walls of the temples and causeway were covered with painted reliefs, and multiple statues were placed inside. Particularly during the reigns of Khafre (ca. 2520–2494 B.C.) and Menkaure (ca. 2490–2472 B.C.), who built the other two pyramids at Giza, there seems to have been great interest in royal statuary, as both kings had many statues set in their monuments. With smooth, fleshy faces and muscular bodies, their images epitomize the highly idealized artistic style of the 4th Dynasty and early 5th Dynasty.

The changes in the pyramid  layout and structure of the royal funerary complex reflected the sun god’s increased prominence and evolving beliefs of kingship. The pyramid was a solar symbol, thought to mimic the sacred benben stone in Heliopolis, where the solar cult was centered. The close relationship between the king and the sun god was further emphasized in a new royal epithet that asserted the king as the sun god’s son.

The king was essentially a living god, who held all power and was at the apex of a highly stratified society. Indeed, the administration was extremely centralized, and most top-level high officials were close relatives of the king, often his own sons. Many officials in the old kingdom of ancient Egypt, were buried within two vast cemeteries of stone mastabas that the state planned out and constructed around Khufu’s pyramid, and their afterlife may have been dependent on the king’s.

The solar cult’s importance in the old kingdom of ancient Egypt, continued to increase during early 5th dynasty. Six kings had sun temples in Abusir. These sun temples were a new type of monument that these kings built in addition to their pyramid complexes. While the worship of the sun god was the primary purpose of these temples, they were also closely connected to the cult of the deceased, and possibly the living king.

By the reign of Menkaure, pyramid size had already declined and become less significant. During the 5th and 6th Dynasties, the kings of the old kingdom of ancient Egypt, invested in other aspects of their monuments, particularly the decoration of the associated temples, which became larger.

The pyramid complex of Sahure (r. ca. 2458–2446 B.C.) is particularly well preserved and offers an excellent example of the types of reliefs that usually covered the temple walls. These reliefs depicted the king triumphing over foreign enemies, interacting with deities, and receiving long lines of offering bearers.

In the middle of the 5th Dynasty, several major social and cultural changes marked an important turning point in Old Kingdom history. The wealth and power of high officials for example, seem to have increased around this time. Unlike during the previous dynasties, the 5th Dynasty of the old kingdom of ancient Egypt, high officials were usually drawn from elite private families, and the increased size of their mastabas reflect their growing influence.

These tomb complexes, erected in Saqqara, Giza, and Abusir, had more rooms, expanded relief decoration with new scene types, and had multiple statues of the deceased representing him in different compositions, poses, or materials.

Also, scenes of daily life, which could depict hunting, agricultural activities, or butchering, became extremely common and ensured that the deceased successfully transitioned to and was provided for in the afterlife.

However, the  artistic style of these complexes changed dramatically toward the end of the 5th Dynasty and this is likely linked to other contemporary cultural developments of that period.

The expressionistic late Old Kingdom style, or the so-called Second Style, which features large eyes, slightly upturned lips, narrow shoulders, and a lack of musculature, was common throughout the 6th Dynasty.

And by the end of the 5th Dynasty, the cult of the new god Osiris had gained momentum.

The last two kings of this time, chose not to build sun temples, and the royal cemetery was moved back to Saqqara. Perhaps most significantly, King Unis (r. ca. 2353–2323 B.C.) had Pyramid Texts carved on the walls of the funerary apartments inside his pyramid. Although these texts and spells include solar and stellar references, the Osirian religion became dominant, and thus they epitomize the decline in the prominence of the sun god and the rise of Osiris within the funerary realm.

The funerary apartments of the 6th dynasty of of all subsequent Old Kingdom of ancient Egypt kings, were inscribed with Pyramid Texts, and by the end of this Dynasty, the pyramids of Queens had them as well.

This was one of the signs of the changing role of the king, which further evolved over the 6th Dynasty as the men and women who surrounded him became increasingly wealthy and powerful. Both Pepi I (r. ca. 2289–2255 B.C.) and Pepi II (r. ca. 2246–2152 B.C.) seemed to have married an unusually large number of women, probably between six and eight, with many being from outside the royal family. At the same time, the status of kings’ wives seemed to have increased. Their funerary temples became larger and more complex, and they could be buried under pyramids, a practice that had formerly been limited to queen mothers.

The state’s interest in the provinces of the old kingdom of ancient Egypt grew throughout this dynasty, and the wealth and influence that had previously been localized among high officials at the capital spread across the country as the prominence of officials residing in and governing the provinces increased. By the reign of Merenre I (ca. 2255–2246 B.C.), many of these men were choosing to be buried there, often in rock-cut tombs. While Upper Egyptian officials had used this type of architecture before, the size and decoration of late 6th Dynasty of the old kingdom of ancient Egypt provincial tombs was greatly expanded.

However, Scholars have debated whether this trend was a sign of a weak central government with high officials acting on their own outside of the king’s grasp, or part of the state’s effort to extend its authority by sending agents to establish its presence in the countryside. But, to some degree, it could reflect a gradual decline in central power of the old kingdom of ancient Egypt and its influence during the 6th Dynasty even as the state maintained control over these regions and attempted to exploit provincial resources.

Effectively, the last king of Dynasty 6 was Pepi II, who, according to tradition, ruled for more than ninety years. Though recent scholars have questioned this, his reign was undoubtedly long, and it is often cited as a primary reason for the subsequent breakdown of the central government of the old kingdom of ancient Egypt.

Yet, while dynastic issues may have played a role in the collapse of the Old Kingdom of ancient Egypt, there were many contributing factors, including increasing decentralization, provincial policies, growing hostility and pressure from Nubian populations to the south, and climate change and the desiccation of the region.

Several ephemeral kings followed Pepi II and they comprise the 7th and 8th Dynasties (ca. 2152–2100B.C.), but the degree to which the capital retained control of the rest of the country during this time is debatable. As the governors of the provinces became autonomous, the Old Kingdom of ancient Egypt came to an end.