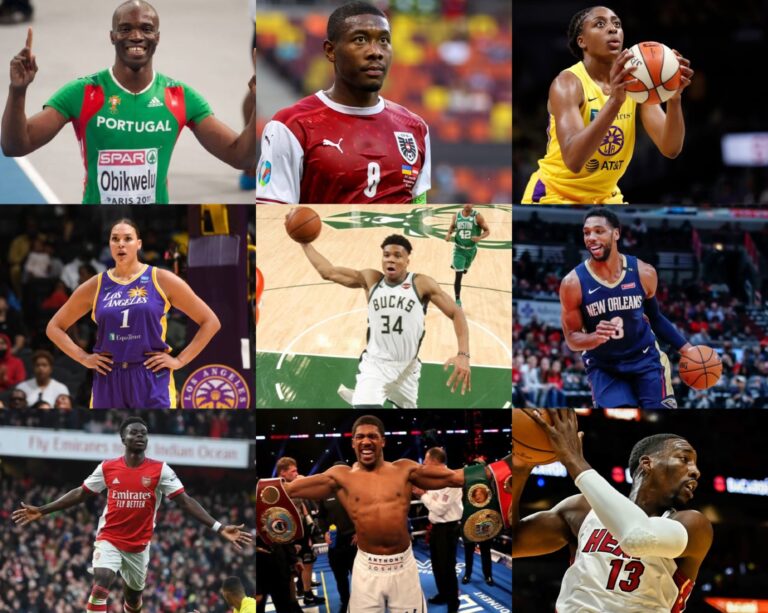 Africa is a continent filled with talented people who dominate in every area of specialization. Nigeria is one of the countries in Africa with a very high number of talented Individuals who are of repute globally. This article highlights 12 top Athletes of Nigerian Origin.

Giannis Sina Ugo Antetokounmpo professional basketball player for the Milwaukee Bucks of the National Basketball Association. He is a famous Basketball player, a Two-time MVP and NBA champion. Giannis is one of the 12 Top Athletes of Nigerian Origin.

In December 2020, Antetokounmpo signed a five-year, $228 million supermax extension with the Bucks, with an opt-out after the fourth year. He  was also named the NBA’s MVP for 2018-19 and 2019-20 and was also defensive player of the year for the latter season. The first MVP nod triggered huge bonuses from sponsors like Nike, which extended its deal with the Greek Freak in 2017. Nike released the Zoom Freak 1 in 2019; it was the largest initial signature shoe launch in Nike basketball history. Disney secured a deal in 2020 to develop a movie around Antetokounmpo’s life, along the lines of “The Blind Side.” Now called “Rise,” it is targeted for a June 2022 release.

Kehinde Babatunde Victor Oladipo is a basketball player for the Miami Heat of the National Basketball Association. He is also one of the top athletes of Nigerian origin.

Kehinde was born in 1992 in Silver Springs, Maryland. He is the son of Chris and Joan Oladipo and has three sisters, Kristine, Kenda and Victoria. Victoria is Victor’s twin sister. Oladipo played high school basketball at DeMatha High School, in Hyattsville, Maryland. DeMatha has produced 13 NBA players. While playing college ball at Indiana University, Oladipo was a sports communications/broadcast major. As a young player for the Magic, Oladipo was recognized for his efforts in the Central Florida community as the winner of the Rich and Helen DeVos Community Enrichment Award in both 2015 (co-winner with Tobias Harris) and 2016. Oladipo was presented in 2016 with the December NBA Cares Community Assist Award.

Kehinde averaged 17.4 points, 4.6 rebounds and 3.9 assists per game in his 462-game career with the Orlando Magic, Oklahoma City Thunder, Indiana Pacers, Houston Rockets and Miami Heat. He began playing during the 2013-14 season and last took the court during the 2021-22 campaign.

Nnemkadi Chinwe Victoria “Nneka” Ogwumike is a basketball player for the Los Angeles Sparks of the Women’s National Basketball Association. She is also on the list of 12 top athletes of Nigerian Origin.

Nneka also plays for Dynamo Kursk of Russia. Her name “Nneka” means “Mother is Supreme” in the Igbo language of Nigeria – where her family hails from. She is 6’2″ and plays power forward. She attended Cy-Fair High School in Cypress, Texas and led them to a 5A State Championship in her senior season.While at Stanford University she helped the Cardinal reach the Final Four four times. Ogwumike was elected President of the WNBA Players Association in 2016 and was re-elected to a new three-year term in 2019.

Nneka was born on July 2, 1990. After being drafted No. 1 overall in the 2012 WNBA Draft, Ogwumike signed an endorsement deal with Nike.  She is also the older sister of Chiney Ogwumike, who also plays for the Sparks. Nneka Ogwumike was named WNBA MVP for the 2016 WNBA season and won the WNBA Finals the same year. She was also named in the W25 the league’s list of the top 25 players of its first 25 years, in 2021.

With a historical popularity index of 41.11, Francis Obikwelu is the most famous sprinter of Nigerian Descent.His biography has been translated into 30 different languages on wikipedia.

Francis Obiorah Obikwelu, GOIH, born 22 November 1978 is a retired Nigerian-born Portuguese sprinter, who specialized in 100 metres and 200 metres. He was the 2004 Olympic silver medalist in the 100 metres. In the same race, he set the former European record in the event at 9.86 seconds, which stood for nearly 17 years. He is on our list of 12 top athletes of Nigerian origin.

Edrice Femi “Bam” Adebayo is a professional basketball player for the Miami Heat of the National Basketball Association.

He is on our list of 12 top athletes of Nigerian origin. Bam was drafted 14th overall pick in the 2017 NBA Draft. Adebayo was rated as a five-star recruit and considered one of the best high school prospects of the 2016 class and also was ranked as the No.5 overall recruit and No.2 power forward in the 2016 high school class.

After signing with the Miami Heat, Bam signed a rookie scale contract with the franchise and joined the team for the 2017 NBA Summer League. Averaging 6.9 points and 5.5 rebounds per game, Adebayo appeared in 69 games for the Heat.

Adebayo’s second season with Miami, Bam played all 82 games while averaging 8.9 points and 7.3 rebounds per game as the Heat finished 10th in the Eastern Conference.

By far having the best season of his career, Edrice has been a force to be reckoned with so far this term.

As one of the 12 top athletes of Nigerian origin, Andre has been one of the best defensive players in basketball over the last decade, winning three NBA titles, including the MVP award in 2015. He averaged 16.3 points, 5.8 rebounds, 4.0 assists and 1.3 steals, while shooting 52 percent overall and 40 percent from deep in the Finals.

He was selected by the Philadelphia 76ers in the 2004 NBA draft, where he stayed until 2012. Following a season at the Denver Nuggets, he was acquired by the Golden State Warriors, where he made a name for himself in the sport. Andre Iguodala represented the United States at the 2010 FIBA World Championship and the 2012 Summer Olympics in London, winning gold medals in both events.

Jahlil Obika Okafor is a professional basketball player for Zhejiang Lions of the Chinese Basketball Association. He was selected with the third overall pick in the 2015 NBA draft by the Philadelphia 76ers.

Jahlil Obika Okafor was born 15 December 1995. He is also a professional basketball player for the Detroit Pistons of the National Basketball Association.

He was selected with the third overall pick in the 2015NBA draft by the Philadelphia 76ers. He has previ-ously played in the NBA for the 76ers, Brooklyn Nets, and the New Orleans Pelicans.

Jahlil Okafor represented Nigeria at the Tokyo Olympics. He had been heavily recruited before high school and was at the top of the recruiting rankings for several years. He is most definitely on our list of 12 top athletes of Nigerian origin.

Jahlil Okafor was born in Fort Smith, Arkansas. His father, Chukwudi, is a second-generation Nigerian American of Igbo descent, and his mother, Dacresha Lanett Benton, was African-American and European-American.

Kamarudeen Usman is a professional mixed martial artist, He is the current UFC Welterweight Champion. Also known as the “Nigerian Nightmare” Kamaru Usman is currently signed to the Ultimate Fighting Championships/UFC. He is on our list of 12 top athletes of Nigerian origin.

Kamarudeen Usman made his professional MMA debut in November 2012. He was able to secure a record of 5–1, competing for several smaller/regional promotions before joining the tryouts for The Ultimate Fighter in early 2015.

Usman defeated Hayder Hassan on July 12th, 2015, at The Ultimate Fighter 21 Finale to win a six-figure contract with the UFC.

‘The Nigerian Nightmare’ defeated Tyron Woodley on March 2nd, 2019, in the co-main event at UFC 235 to become the UFC Welterweight Champion. Usman has been the champion ever since and remains the king of the 170-pound division.

Bukayo Ayoyinka T. M. Saka is an English professional footballer who plays as a winger, left-back, or midfielder for Premier League club Arsenal and the England national team.

Bukayo Saka was born in London, to Nigerian parents in September 2001 and joined Arsenal’s Hale End Academy when he was just seven years old. He is on our list of 12 top athletes of Nigerian origin. He was handed his first professional contract by Arsenal when he was 17 years old and he was promoted to the Gunners’ Under-23 team at the same time.

Saka made his senior competitive debut for Arsenal in a Europa League group-stage game against Ukrainian side Vorskla Poltava back in November 2018. Saka scored his first senior goal for the Gunners in September 2019 and has been a regular fixture in the Arsenal side since enjoying a breakthrough campaign in 2019-20.

Elizabeth Folake Cambage is an Australian professional basketball player who last played for the Los Angeles Sparks of the Women’s NBA.

30-year-old Liz was born on August 18, 1991 in London, England. Her father is Nigerian and her mother is Australian, and after their divorce Cambage moved to Australia with her mom. Folake is on our list of 12 top athletes of Nigerian origin.

During her time in WNBL she accepted a scholarship to and played for the Australian Institute of Sport, and the Bulleen Boomers.

She returned to the WNBL in 2020 joining the Southside Flyers for the season. Liz became  a vegetarian after she stopped eating meat in 2018.

Our list of top athletes of Nigerian origin will not be complete without mentioning “AJ.” Anthony Oluwafemi Olaseni Joshua. He is a two-time former unified world heavyweight champion.

He has successfully represented Britain at the Olympics, Commonwealth Games, and several other international sporting events.

Born on October 15 1989, AJ bagged the gold medal at the 2012 London Olympics. His astonishing move up from the amateur ranks to world championships has earned him the status of a powerful puncher and a top-class opponent. Among the six heavyweight belts in the world, Joshua has successfully conquered four to his name and was the contender for the BBC sports personality of the year. He holds a reputation to fight in high-profiles matches with expensive stakes and drawing record breaking views and audiences.

David Olatukunbo Alaba is an Austrian professional footballer who plays either as a central midfielder, wide midfielder, left-back or centre-back for La Liga club Real Madrid and the Austria national team.

Born on June 24 1992, David is nicknamed, “the complete footballer.”  He was born to a Filipino mother, Gina Alaba (a nurse) and a Nigerian father, George Alaba (a former soldier and musical legend)

He holds Austria’s record as the youngest player to play for the team, debuting for them as a 17-year-old.