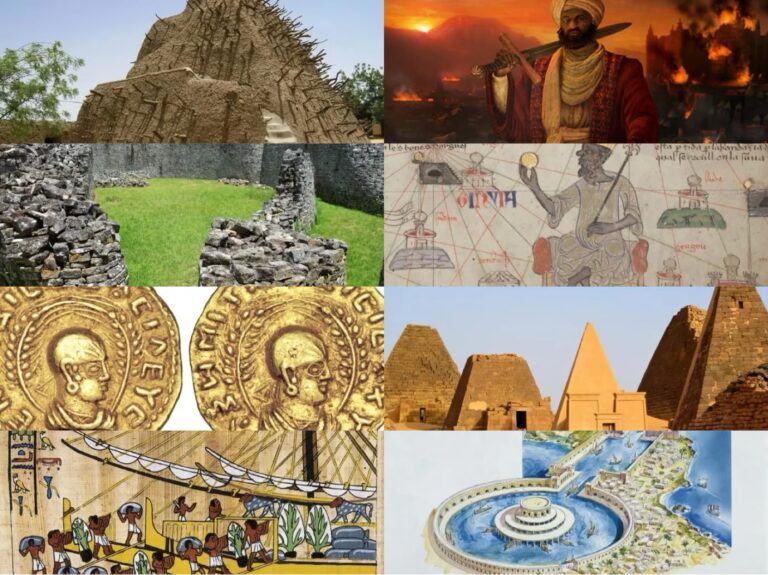 The media hasn’t always been kind to African history. From medieval Sudan to the the glory days of ancient Sudan,there is a whole lot about africa that is left out. This article highlights 7 influential ancient African empires that shows that the trans-Atlantic slave trade interrupted Africa’s glorious history.

In no particular order, here are 7 influential ancient African empires you should know.

The Punt culture is one of the most enigmatic in Africa. In Egyptian records, the kingdom is described as a “Land of the Gods” rich in ebony, gold, myrrh, and exotic animals like apes and leopards. Historical accounts of the kingdom date to around 2500 B.C. During Queen Hatshepsut’s rule in the 15th century b.c., the Egyptians are known to have dispatched massive flotillas and caravans on trade missions to Punt, although they never pinpointed its location.

Although punt is one of the influential Ancient African empires, the location of the fabled kingdom is currently a contentious subject among academics. Although the Arabian Peninsula and the Levant have been suggested as prospective options, the majority of people think it existed somewhere along the East African Red Sea coast. A group of experts made an attempt to identify Punt in 2010 by examining a mummified baboon that its rulers had once given to the Egyptian pharaohs. Despite the fact that their findings indicated that the remains most closely resembled animals discovered in contemporary Ethiopia and Eritrea, the exact location of the Land of Punt is still unknown.

The influential Kingdom of Aksum ruled over portions of what are now Eritrea and northern Ethiopia during the time when the Roman Empire rose and fell. Surprisingly little is known about Aksum’s early history, but by the second and third centuries A.D. it had become a trading powerhouse, connecting ancient Europe and the Far East with its wealth of gold and ivory.

As one of the influential ancient African empires,  Ge’ez, one of the first written languages in Africa, was used by the kingdom. It also had a distinctive architectural style that included the construction of enormous stone obelisks, some of which were over 100 feet tall. A political and armed relationship with the Byzantines resulted from Aksum’s adoption of Christianity as one of the world’s first empires in the fourth century. The Ethiopian Orthodox Church, which was the empire’s religious legacy, still exists today. The empire eventually fell into disarray sometime in the 7th or 8th century.

3. The Kingdom of Kush

The Kingdom of Kush remained a regional power in Africa for more than a thousand years, despite being frequently overshadowed by its Egyptian neighbors to the north. The ancient Nubian empire peaked in the second millennium B.C., when it reigned over a sizable portion of the present-day Sudan along the Nile River. Nearly all information about Kush comes from Egyptian sources, which suggests that it was a bustling economic hub with a thriving market for gold, ivory, incense, iron, and other precious metals.

The kingdom of Kush copied many of its neighbor’s practices and was both a trading partner and a military rival of Egypt, even going ahead to rule Egypt during the 25th Dynasty. As one of the influential African empires, the Kushites erected their own varieties of pyramids, mummified their dead, and worshipped some of the Egyptian gods. More than 200 pyramid ruins—more than there are in the entirety of Egypt—can be seen in the vicinity of the former Kushite city of Meroe.

Carthage was a prosperous trading center in North Africa for more than 500 years, as well as a known adversary of ancient Rome in the Punic Wars. In what is now Tunisia, the city-state first appeared as a Phoenician settlement in the eighth or ninth century B.C. Later, it expanded into a vast maritime empire that dominated trade in textiles, gold, silver, and copper. Its capital city had almost 500,000 residents at its height and a sheltered harbor with enough mooring berths for 220 ships.

As one of the influential ancient African empires, Carthage’s power eventually spread from North Africa to Spain and parts of the Mediterranean, but its desire for growth caused it to clash more frequently with the developing Roman Republic. Three bloody Punic Wars between the ancient superpowers, which began in 264 B.C. and ended in 146 B.C. with Carthage’s nearly complete destruction. Today, Tunis is home to a number of ruins that are essentially all that’s left of the once-powerful empire.

The Mali empire is undoubtedly one of the influential ancient African empires. The Empire was established in the 1200s when Sundiata Keita, a leader who was sometimes referred to as the “Lion King,” launched an uprising against a Sosso king and brought his people together to form a new kingdom. The empire became more tightly bound to a sizable area of West Africa under Keita and his successors, and it prospered from trade. Djenné and Timbuktu, two of its most significant cities, were well known for their ornate adobe mosques and Islamic educational institutions. A library with an estimated 700,000 manuscripts was part of Timbuktu’s Sankore University, one of these establishments.

The Mali Empire eventually fell apart in the 16th century, but when it was at its height, it was one of the jewels of the continent of Africa and was renowned all over the world for its wealth and luxury. One fable about the kingdom’s wealth is about the monarch Mansa Musa, who stopped in Egypt on his way to Mecca in the fourteenth century. Contemporary sources claim that Musa gave away so much gold during the visit that it fell in value in Egyptian markets for a number of years.

The Great Zimbabwe, a massive complex of stacked boulders, stone towers, and defensive walls constructed from cut granite stones, is one of sub-Saharan Africa’s most magnificent monuments. The rock citadel has been the subject of myths and stories for a very long time; it was formerly believed to be the home of the Biblical Queen of Sheba, but scholars today recognize it as the capital of an indigenous empire that flourished in the area during the 13th and 15th centuries. This kingdom possessed a sizable portion of what is now Botswana, Zimbabwe, and Mozambique.

As one of the influential ancient African empires, It was notably wealthy in precious metals and animals, and it was situated alongside a trade route that connected the area’s gold mines with ports on the coast of the Indian Ocean. The ruins of objects like Chinese ceramics, Arabian glass, and European fabrics show that it was once a well-connected trade city, despite the fact that nothing is known about its history. In its heyday, the fortress city at the Great Zimbabwe was home to an estimated 20,000 people. However, it was mysteriously abandoned sometime in the 15th century after the kingdom’s decline.

Few states in African history can match the Songhai Empire in terms of size. It is definitely on our list of influential ancient African empires. This West African kingdom, which was larger than Western Europe at the time and included portions of a dozen contemporary countries, was founded in the 15th century from some of the old Mali Empire’s provinces. Due to aggressive trade practices and a sophisticated bureaucratic structure that divided its enormous possessions into various provinces, each with its own governor, the empire experienced a time of prosperity.

It peaked in the early 16th century during the reign of the pious King Muhammad I Askia, who expanded Timbuktu with the aid of Egypt’s Muslim Caliph and founded hundreds of Islamic schools. The Songhai Empire was once one of the most powerful nations in the world, but it fell in the late 1500s as a result of internal struggle and a period of civil war that left it vulnerable to an invasion by the Sultan of Morocco.

In conclusion, the empires/kingdoms listed above are not the only influential empires in ancient Africa, there are a lot more, Ancient Africa was glorious.