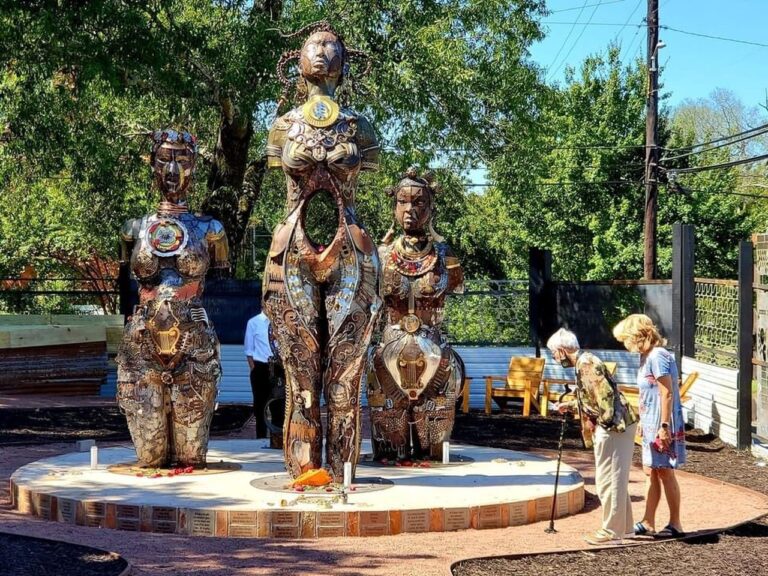 And on May 7, a monument honoring the ‘Mothers of Gynecology,’ Anarcha, Lucy, and Betsey, who underwent dozens of vaginal procedures performed by Sims, was unveiled in Montgomery by Montgomery artist and activist, Michelle L. Browder.

The monument is not far from where the procedures took place, and it is about a mile away from a statue of J. Marion Sims, the “father of gynecology,” which still stands in front of the Alabama State Capitol. The monument resembles wind-up clockwork artifacts: metal sculptures assembled and welded from recycled found parts because “these women were discarded,” ranging in height from 9 to 15 feet.

The sculptures contain both meaningful and painful symbolism. Lucy (9ft) is represented by the shortest figure, who has bike chains for hair. Browder created a tiara for Betsey using a speculum, a tool designed by Sims for vaginal exams (12ft). The statues are all rust and gold in color, with brighter patinas from beads and other accessories.

Surgical scissors are attached to the body of the tallest figure, Anarcha (15ft), who has a cavity in her torso graced by a single metal rose in place of her uterus. Her womb is nearby, filled with cut glass, needles, medical instruments, scissors, and sharp objects meant to make viewers feel the woman’s pain and suffering. Black women’s names are welded to the statues.

“No one will ever look down on these women again,” Browder told the Post.

Anarcha, Lucy, and Betsey, according to Browder, represent an effort to correct the historical record and draw attention to the health disparities that disproportionately affect Black women and mothers today.

Browder’s campaign to create the work began in the 1990s, when she was a student at the Art Institute of Atlanta and first learned of the story of Anarcha, Lucy, and Betsey. She stated that a Norman Rockwell-style portrait of J. Marion Sims at work by Robert Thom in 1952 inspired her to learn more about the women behind Sims’ experiments.

The physician is depicted in the painting with a benevolent expression as he inspects his patient; in the background, two Black women hide behind a curtain. The painter exaggerates the ladies’ ages: Anarcha was thought to be 17 when she was treated by Sims. There’s also no evidence of the restraints that would be used instead of anesthesia or other numbing techniques. The myths in the piece seemed to beg for a creative response. “It is my duty as an artist, as Nina Simone said, to reflect the times,” Browder says.

A decade later, in 2002, when Browder relocated to Montgomery to assist with her parents’ charitable organization, she discovered that their property was only eight blocks from the site of the plantation where Anarcha was enslaved, and only six blocks from where Sims performed over 30 surgeries on her. It’s also close to the National Memorial to Peace and Justice, a monument to the victims of racist lynchings created by Montgomery lawyer and human rights activist Bryan Stevenson, whom Browder credits with inspiring her work.

She based the statues on Tara Mechani, a steampunk-inspired sculpture by San Francisco artist Dana Albany, a regular on the Burning Man circuit. During the pandemic, the two artists became acquainted, and Browder traveled to the Bay Area last year for a crash course in welding with fabricators at the Box Shop.

She completed the skeletons for the sculptures in San Francisco using discarded and recycled metals and drove them to Montgomery to finish them, collecting more scrap along the way.

The “Mothers of Gynecology” public commemoration coincides with the grand opening of the More Up Campus, a history center and Browder’s headquarters located not far from where Sims conducted his experiments between 1845 and 1849. The statues are the first phase of the campus, which will eventually include a museum dedicated to the histories of women and a travel center for visiting scholars and activists.

The ongoing development of the More Up Campus is also part of a larger national effort to rethink American monuments, both built and unbuilt alike.