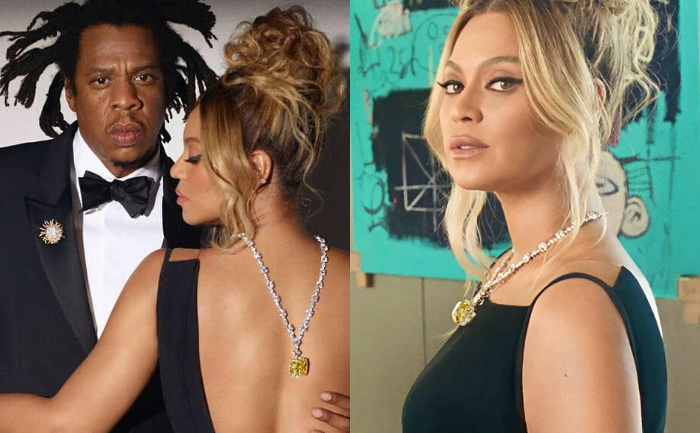 Beyoncé shared some of the striking images from the Tiffany campaign on her Instagram page. She wore the legendary 128.54 carats Tiffany Diamond, one of the world’s largest yellow diamonds; as she and Jay-Z became the face of the luxury brand.

The diamond was re-set in 2012 in a necklace with an additional 100+ carats of diamond stones to celebrate Tiffany’s 175th anniversary.

Earlier, it was donned by Mary Whitehouse, wife of American diplomat Edwin Sheldon Whitehouse; Hollywood icon Audrey Hepburn; and singer Lady Gaga. However, this is the first time the diamond featured in an advertising campaign.

Some might say that featuring the yellow diamond was a subtle nod to Audrey Hepburn’s iconic film Breakfast at Tiffany‘s. However, the styling also has a few nods to Audrey’s character, Holly Golightly. From the updo and opera gloves to the iconic black dress with a curved back highlighting the jewels, these details were an obvious nod to the star.

Additionally, Beyoncé also recorded a cover of Moon River for the campaign. It was popularised by Audrey Hepburn when she sang it in the 1961 film. A new video with footage shot on Super 8 by Jay-Z will be released on September 15.

Another detail that made the shoot quite iconic was that the Carters posed in front of a painting from Jean-Michel Basquiat’s private collection; called “Equals Pi.” It resembles the signature Tiffany Blue and has never been on public display before.