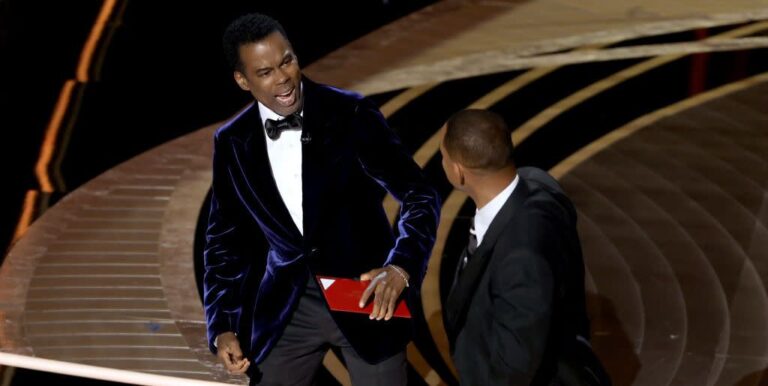 Chris Rock is finally speaking up four months after being slapped by Will Smith in front of a star-studded Oscars audience and the world.

The comedian, who reacted to the now-famous slap with humor and refused to press charges against Smith, made a joke about the incident during a stand-up show over the weekend.

Rock performed at New York City’s Madison Square Garden on Saturday, where he and Kevin Hart co-headlined the Only Headliners Allowed comedy tour, which included a surprise appearance by Dave Chappelle.

According to a source to Entertainment Tonight, Rock during his set “made a joke about Will during a bit about ‘cancel culture,’ joking that ‘anyone who says words hurt has never been punched in the face.'”

“I’m not a victim,” he continued. “Yeah, that sh*t hurt, motherfu**er. But I shook that sh*t off and went to work the next day. I don’t go to the hospital for a paper cut.”

The show is the first time Rock has spoken publicly about The Slap, though he previously hinted that he would make jokes about it once he had fully processed what had occurred.

Chris Rock in his sold-out stand-up show at the end of March, just days after the 2022 Oscars, received a standing ovation when he arrived.

“How was your weekend?” the star said at the time, giving the crowd a wink. “I don’t have a bunch of shit about what happened, so if you came to hear that, I have a whole show I wrote before this weekend. I’m still kind of processing what happened. So, at some point, I’ll talk about that shit. And it will be serious and funny.”

Meanwhile, Smith has remained out of the spotlight since the Oscars and has been barred from attending any Academy of Motion Picture Arts and Sciences events for the next ten years.