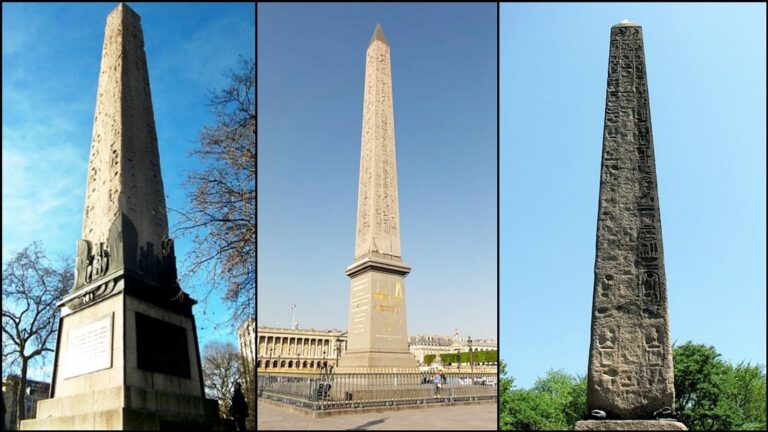 When it comes to studying Africa’s past and present, ancient Egypt is one of the popular places to start. It is famous for a variety of reasons, including its obelisks, which are tall stone-cut structures. These vertical structures were carved out of a single stone and were effectively used as tombstones to identify graves and underground burial chambers in the kingdom of Axum.

The ancient Egyptians called obelisks, tekhenu and used them to tell the time in the past. Their pinnacles were gold-plated in order to reflect sunlight. According to historians, obelisks symbolized immortality and eternity, and their long structure helped connect the heavens and the earth.

Cleopatra’s Needle refers to three ancient Egyptian obelisks that can be found in New York City, London, and Paris. However, they are not all from the same location in Egypt. The obelisks in New York and London are made of red granite quarried in Aswan; an important stone supplier for Egyptian antiquities. Pharaoh Thutmose III commissioned the two obelisks; each weighing around 224 tons and standing 68 feet tall. And each for the Temple of the Sun in Heliopolis, near modern-day Cairo.

When the Romans discovered the two obelisks in 12 BCE, they had toppled and were partially buried in the sand. The obelisks were then brought to Alexandria by the Romans and placed at the entrance to a temple dedicated to Julius Caesar. Cleopatra built the temple, which may explain why the obelisks are known as “Cleopatra’s Needles.”

The obelisk in Paris, on the other hand; is made of yellow granite and used to stand in front of Egypt’s Luxor Temple. Its twin, standing 75 feet tall and weighing over 250 tons, can still be found at the Luxor Temple. The hieroglyphs on the three obelisks commemorate Ramesses II’s military achievements.

What drew the trio to New York, London, and Paris?

According to the Central Park Conservancy; Khedive Ismail Pasha presented Cleopatra’s Needle to the United States to commemorate the opening of the Suez Canal. According to Ancient Origins, the obelisk was given to the US Consul General in Cairo as a token of gratitude for the US’s neutrality during the French and British attempts to seize control of Egypt’s government. From Alexandria to New York, the obelisk was transported. The vertical structure was relocated over the course of a year. In January 1881, it was finally erected in Central Park. In 2011, New York City launched a three-year project to protect the obelisk. Taking place after the then-minister of Egypt’s Supreme Council of Antiquities; Zahi Hawass, warned that it would be removed if it was not properly cared for.

The obelisk in London is located on the Thames River’s Victoria Embankment, near the Golden Jubilee Bridge. Egypt’s King Muhammad Ali presented the antiquity to the United Kingdom in 1819 to commemorate British victories at the Battle of the Nile in 1798 and the Battle of Alexandria in 1804. (1801). Despite the fact that the gift was greatly appreciated, the British government was unwilling to pay such a high price to have it delivered to England. The obelisk remained in Alexandria, Egypt, for more than five decades until 1877, when it was transported to England by anatomist Sir William James Erasmus Wilson. It was a terrifying sea adventure.

According to one account, “the obelisk left Alexandria on September 21, 1877, enclosed in an iron cylinder – nicknamed The Cleopatra – that included a stern and rudders and was towed along by the Olga ship.” A storm in the Bay of Biscay threatened the crew of The Cleopatra just halfway to their destination. The Olga’s six crew members drowned during the initial rescue attempt, but Captain Carter and his five crew were eventually rescued. The Cleopatra miraculously survived and was discovered adrift in the Bay a few days later, eventually being rescued by the Fitzmaurice and brought to Ferrol Harbour in northwestern Spain.

The obelisk was later towed to Gravesend, Kent, by the Anglia, another steamer. On September 12, 1878, the obelisk was re-erected alongside the Thames, guarded by two sphinx statues. A German bomb nearly destroyed the obelisk during World War I, injuring the structure’s pedestal as well as the pedestals of its sphinxes. The damage was not repaired, but a plaque commemorating the incident was erected.

The Needle of Cleopatra in Paris:

The Cleopatra’s Needle, also known as the Luxor Obelisk, is located in the heart of Place de la Concorde in Paris. The obelisk was built around 3,000 years ago and given to the French in 1833 by Muhammad Ali. The French paid for its transportation to Paris. King Louis-Phillipe built it near the Place de la Concorde on October 25, 1836. According to Ancient Origins, the obelisk was placed on a pedestal that was originally designed to hold a statue of King Louis XVI on horseback. That statue, however, was destroyed during the 1830 Revolution. After the structure’s original golden capstone was stolen in the 6th century BC, the French government affixed a gold-leafed capstone to it in 1998.

Meghan Markle Reveals She is 43% Nigerian After Genealogy Test