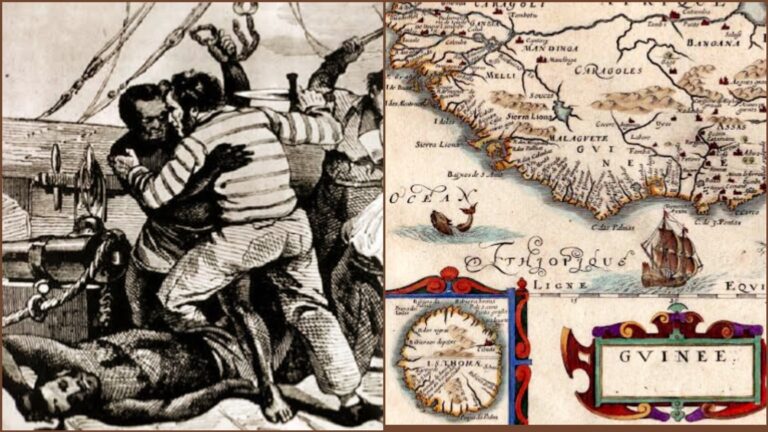 The Little George Ship Revolt occurred in June 1730 on the British ship, Little George. This little-known revolt was one of history’s most successful uprisings of enslaved Africans on the high seas.

The revolt took place five days after the Little George sailed from the coast of Guinea to transport captured Africans to the British North American colony of Rhode Island. The revolt began when several Africans managed to break free from their iron chains, overpowered the crew, and sailed the ship back to Africa, specifically to the Sierra Leone River, where they abandoned the ship.

On June 1, 1730, Captain George Scott sailed his ship, the Little George, from the Bonnana Islands off the coast of Guinea (West Africa) to Rhode Island with 96 captured Africans. The captured Africans were to be sold as slaves there.

Five days into the Atlantic crossing, the captives, who had already been mistreated by the Little George Ship’s crew and were packed and chained down in heavy shackles in the ship’s dark and poorly ventilated lower deck, revolted.

On June 6, 1730, around 4:00 a.m; several captives broke free from their iron shackles and broke through the Little George Ship’s bulkhead. They stormed the ship’s deck, seizing weapons and killing three crew watchmen (John Harris, Jonathan Ebens and Thomas Ham) who were attempting to alert other crew members and Captain Scott.

Captain George Scott and other crew members were apprehended and imprisoned in a cabin with several slaves tending the cabin door while other slaves made a bomb out of gunpowder in a bottle that went off almost destroying the ship and forcing other resisting whites on board to surrender to the captured Africans.

Despite having no sailing or navigation experience, the Africans in command of the Little George Ship were able to turn it around and sail it back to the African continent. Nine days later, the Little George arrived at the Sierra Leone River’s mouth, where both the Africans and the British crew abandoned ship. Captain George Scott, who was later rescued by another slave ship, detailed the revolt, leaving a record for future generations.