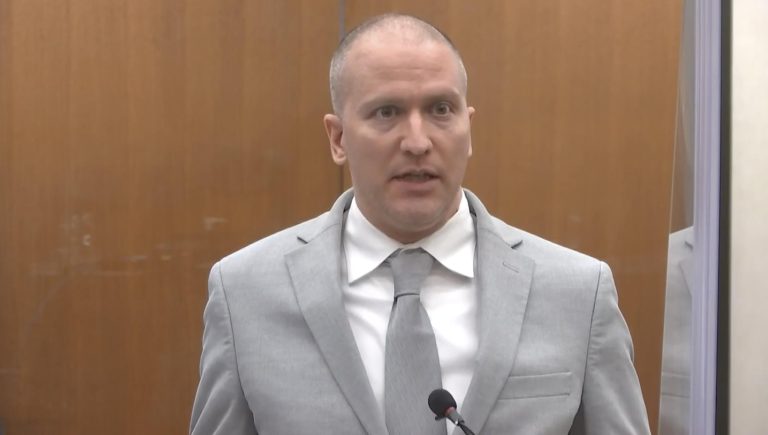 Derek Chauvin was sentenced to 21 years in prison on Thursday, nearly seven months after pleading guilty to federal charges that he violated George Floyd’s civil rights when he knelt on Floyd’s neck for 9½ minutes while detaining him in May 2020.

Before imposing the sentence, U.S. District Judge Paul Magnuson referred to Chauvin’s treatment of Floyd as “offensive” and “unconscionable.”

“I really don’t know why you did what you did. But to put your knee on another person’s neck until they expire is simply wrong and for that conduct, you must be substantially punished,” the judge said.

Federal prosecutors had asked Magnuson to sentence Chauvin to 25 years in prison, on the top end of the 20-25 range of the plea deal, claiming that he abused his authority as a police officer and acted callously.

The defense had requested a sentence of 20 years, stating that Chauvin was remorseful for his actions and had accepted responsibility. Paul Magnuson sentenced Chauvin to 21 years in prison, with credit for time already served, bringing his total sentence to 20 years and five months.

Chauvin is already serving a 22½-year sentence after being found guilty of second and third-degree murder, as well as second-degree manslaughter, in a state case in April 2021 for Floyd’s death. His federal sentence will run concurrently with his state sentence.

Chauvin initially pleaded not guilty to the federal charges, but in December he changed his plea. At the time, he also admitted guilt in a separate federal indictment in connection with accusations that he violated the civil rights of a 14-year-old boy during an encounter in September 2017.

Chauvin spoke briefly before his sentence, wishing the Floyd family “all the best in their lives,” but he did not apologize.

Several people spoke in court before the sentencing, including George Floyd’s brother, Philonise Floyd. He demanded the maximum sentence for Chauvin, claiming he hasn’t gotten a good night’s sleep since his brother was “murdered in broad daylight.”

He stated that his family has been given “a life sentence” because they will never be able to bring his brother back. During the sentencing, John Pope, the boy at the center of the 2017 incident, also spoke and said he feared for his life during his encounter with Chauvin, which “changed my life forever.”

Pope, 19, described himself as a “bright kid with dreams,” but those dreams began to fade after he witnessed police brutality at the hands of Chauvin. Carolyn Pawlenty, Chauvin’s mother, who described her son as a “caring man,” asked the judge to send Chauvin to a federal prison near family members.

“I believe it is God’s will for all of us to forgive,” Pawlenty said. “Everyone in the state of Minnesota needs to heal and remember all lives matter. No matter the color of your skin, every life matters.”

Three other former officers at the scene of Floyd’s death, Thomas Lane, J. Alexander Kueng, and Tou Thao, were convicted in February on federal charges of depriving Floyd of his civil rights.

Kueng and Thao were also found guilty of failing to intervene to prevent Chauvin from using excessive force. Their sentencing dates have not yet been set. During the sentencing hearing on Thursday, Magnuson stated that Chauvin “absolutely destroyed the lives” of those officers.

The encounter between the four officers and Floyd in May 2020 was captured on video by a bystander, a traffic camera, and the officers’ bodycams. On the recordings, Thao can be seen standing between onlookers as his colleagues pin Floyd to the ground. Lane and Kueng are on top of Floyd, and Chauvin is applying pressure on Floyd’s neck. The officers were responding to a call about a counterfeit bill from a convenience store.

Floyd’s death at the hands of police sparked worldwide protests against systemic racism and police brutality. Minneapolis Attorney General Keith Ellison, who led the case that resulted in Chauvin’s conviction on state charges, described the federal sentence as “another step of accountability on the road to justice.”

“Federal prosecutors took this case because it was not a typical crime: it was an intentional deprivation of life and liberty that is criminal under federal law, so it was appropriate and right that they stepped in,” Keith Ellison said in a statement. “In obtaining this conviction and sentence, they sent a message to Minnesotans, all Americans, and law-enforcement agencies around the country that crime like this will not be tolerated and that we must do better.”