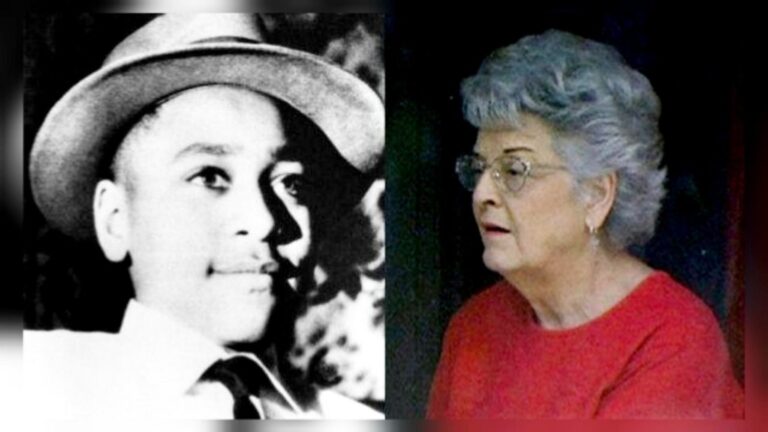 Carolyn Bryant Donham, who claimed Emmett Till flirted with her, leading to his horrific death in 1955, may have been given an open kidnapping warrant before the teenager’s body was discovered. Till’s family is adamant that she be held accountable for his death in any way possible.

Emmett Till was visiting family in Money, Mississippi, when he noticed Carolyn Bryant Donham, 21, working in a grocery store. Although what happened at the store is debatable, Emmett was said to have whistled at the woman by his cousin Wheeler Parker Jr.

Carolyn claimed Emmett Till grabbed her and informed her husband and the court.

Carolyn Bryant Donham’s then-husband Roy Bryant, 24, brother-in-law Joe William Milam, and other men went up to Emmett Till’s uncle’s house, kidnapped him, and drove him away. In August 1955, they thrashed Emmett, gouged out his eye, shot him in the head, tied his body to a cotton gin fan with barbed wire, and tossed him into Mississippi’s Tallahatchie River.

What was left of his body was later returned to Chicago, where his mother insisted on a public funeral service with an open casket at Roberts Temple Church of God In Christ. This decision drew attention not only to racism in the United States, but also to the limitations and vulnerabilities of American democracy.

It is “one of the most infamous acts of racial brutality in our country’s history,” according to the US Department of Justice. Emmett’s families’ demand for justice prompted Congress to pass an anti-lynching law last month. However, none of the assailants or accomplices in the crime have been convicted, and all of the witnesses have died.

An all-white jury acquitted two suspects, Roy Bryant and Joe William Milam, of the murder of Emmett Till in September 1955. A grand jury declined to indict them on kidnapping charges in November 1955. Two months later, in a magazine story, the men confessed to kidnapping and murdering Emmett.

Deborah Watts, the Emmett Till Legacy Foundation’s executive director and a distant cousin of Emmett, believes Donham should face charges, even if they aren’t for murder.

“Mississippi is not the Mississippi of 1955,” Watts stated, “but it seems to retain some of that era of white lady protection.”

In 2017, the US Department of Justice reopened a closed investigation into Emmett till’s murder and kidnapping after a professor stated in a book that Donham confessed to him about lying in court about the events leading up to the killing.

According to Duke University Professor Timothy Tyson, who spoke with Donham in 2008, Emmett never grabbed her waist, stroked her hand, or suggested, “How about a date, Baby?”

According to Jaribu Hill, a lawyer working with the family, there is no indication that Donham’s kidnapping warrant was dropped, so it could be the break the police need to file a criminal court case.

“Remember, it was Carolyn Bryant, the 21-year-old white lady, who pointed a child to her violent, murdering husband,” Hill told the Jackson Free Press last month. “We’re looking for justice.” We’re looking for the original warrant from 1955 that should have been served on her.”

Federal authorities investigated the murder as part of the Cold Case Initiative in 2004, but it was ultimately determined that the DOJ lacked jurisdiction to bring federal charges.

Carolyn, who is now 88 years old, denied recanting her story when questioned by the FBI, and federal prosecutors said it would be impossible to prove she did. Carolyn did not explicitly state that there was no physical interaction, and Timothy Tyson did not record the confession. The Department of Justice closed the case in December 2021.

Dale Killinger, a retired FBI agent who worked on the case more than 15 years ago, said Donham didn’t seem to know she was being investigated. Killinger told The Associated Press that he had never seen or heard of a warrant being revoked by a judge. It’s unclear whether it could be used today to apprehend or convict Donham. Killinger told reporters that even if the document is recovered, the courts will require witnesses to testify.