Eric Brown, Black realtor was showing a home to a Black father and son, when they all got handcuffed by Michigan police 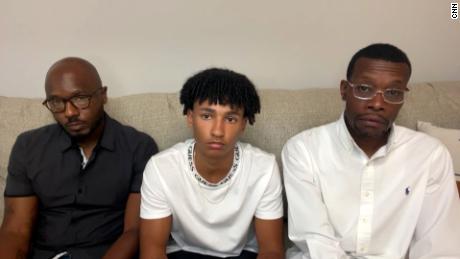 A black real estate agent, Eric Brown was showing an Army veteran and his 15-year-old son, who are also black, a house in Wyoming Michigan; was confronted and handcuffed by police with drawn guns after a white couple called 911 on the group.

Apparently, a nosy neighbor had called 911 saying that a burglary suspect who had been arrested the week prior had returned to the home. There was no word on what that person was accused of doing but the cops clearly thought they were about to arrest Tony Montana.

Eric Brown showed officers his credentials as a real estate agent, while still cuffed; and told officers he was showing the home and police immediately uncuffed the group and apologized. 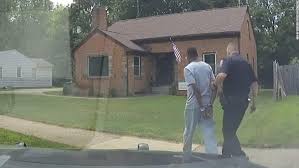 When Asked if he felt they had been racially profiled, Brown said; “In that moment, it certainly felt that way.” He found it difficult to justify the level of force used, he said, describing it as a “tactical” response.
Eventually, all three were released from handcuffs but without significant injury to their mental health and dignity.
The incident scared 15-year-old Samuel Thorne, who told Lemon he felt; “confusion and shock and fear … because I had no idea why they were all down there at that time.”
“It went from, ‘Dad, there’s cops outside,’ to ‘come outside with your hands up,’” Samuel said. “That was kind of like, just from zero to 100.”
The Wyoming Police Department apologized but said that they were acting in alignment with the official protocol for the given situation.
“When responding to a reported home invasion in progress with multiple individuals inside a home, this is standard protocol,” Wyoming police said in their statement.
Share. Facebook Twitter Pinterest LinkedIn Tumblr Telegram Email
Adaugo