Officer Who Fatally Shot Tamir Rice, Hired as A Police Officer In Pennsylvania 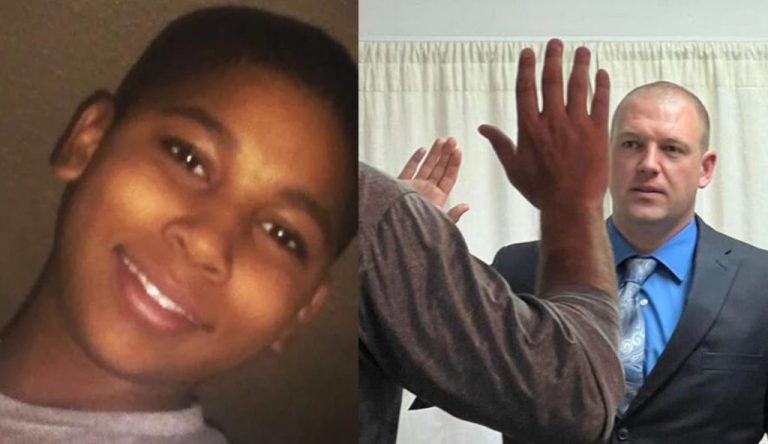 The former Cleveland officer who fatally shot 12-year-old Tamir Rice in 2014 was hired this week as the lone police officer in a small Pennsylvania town, nearly eight years after the boy’s death sparked nationwide protests against law enforcement’s use of deadly force against Blacks.

Borough President Steve Hazlett announced on social media that Timothy Loehmann was sworn in on Tuesday in Tioga, Pennsylvania. The borough council voted after the officer’s name was revealed to the Williamsport Sun-Gazette and local media.

Hazlett clarified on Facebook with a photo and caption that the officer hired to represent the borough of about 700 people was Loehmann, who was fired from the Cleveland Police Department in 2017 for lying on his job application but faced no criminal charges in connection with Rice’s death. Loehmann shot and killed Rice in November 2014 while he was carrying a pellet gun at a playground.

“Timothy Loehmann is your new Tioga police officer,”  Hazlett wrote. In recent days, the hiring has sparked protests and outrage, including from Tamir Rice’s mother, Samaria Rice, who told The Washington Post that the decision was “a big mistake.”

“He shouldn’t be a police officer anywhere in the United States,”  she said, adding that she was outraged and worried for the Tioga community. “I’m actually shocked that anybody would give him a job knowing what he has done to my family.”

Rice’s family and estate’s attorney, Subodh Chandra, told The Washington Post on Thursday that he was “shocked and yet not surprised.” “Timothy Loehmann has shown a level of shameless determination to rub his conduct into the faces of the family of Tamir Rice and the rest of the world,” Chandra said. “The level of bad judgment here by the Tioga Borough Council is really unfathomable, and I hope they will be held to account.”

Tioga Borough Mayor David Wilcox stated that he was unaware of Loehmann’s background when the borough council found him and agreed to hire him. Wilcox told the Cleveland Plain Dealer that he was not given the opportunity to review Loehmann’s résumé and that the Rice case was never brought up during the process.

The specifics of Loehmann’s review process remain unknown. “I was under the impression that there was a thorough background check into him, that he didn’t have any issues,” Wilcox told the outlet. “I found it strange that someone would move here all the way from Cleveland, Ohio, for $18 an hour. But I heard that he wanted to get away from it all and come here to hunt and fish.”

Wilcox shared a video of a recent borough council meeting on Facebook on Thursday, showing a member motioning “to hire a police officer by the name of Timothy, I still can’t pronounce that name.” According to the video, he spelled out “Lochmann,” saying the officer would be hired “under the condition that he passes all the physicals and everything accordingly.”

“Why were we NOT made aware of the last name change?” Wilcox wrote. Garrett Carr, a Sun-Gazette freelance journalist, broke the story first.

The medical examiner’s report indicates more than 60 wounds on Walker’s body, according to Akron Police Chief Stephen Mylett, who said he did not know the exact number of rounds fired at Walker. Eight officers involved in the shooting have been placed on paid leave while the Ohio Bureau of Criminal Investigation and the Akron Police Department’s Office of Professional Standards and Accountability conduct investigations.

Loehmann’s hiring in Tioga, about 300 miles east of Cleveland and just a few miles from New York state, is the latest example of a police officer being rehired after being fired elsewhere.

According to a 2017 Post report, while the United States’ largest police departments fired at least 1,881 officers for misconduct that betrayed the public’s trust over a decade, departments were forced to reinstate more than 450 officers after union contract mandated appeals.

On Nov. 22, 2014, two Cleveland police officers, Loehmann and Frank Garmback, responded to a 911 call about a man with a gun in a park. Rice was playing with a pellet gun that, according to officials, was indistinguishable from a regular pistol. Although the caller told the dispatcher that this person was possibly a child playing with a toy, authorities said that information was not relayed to the officers, who handled the call as an “active shooter” situation.

Loehmann, a White rookie officer, shot Rice from the passenger seat of the patrol car seconds after driving onto the grass. Loehmann later told authorities that the 12-year-old Black child appeared to be reaching into his waistband for a weapon.

Following an investigation by Ohio authorities, a grand jury declined to indict Loehmann in December 2015. Loehmann was eventually fired from the department for failing to disclose on his job application that he had left his previous position as an officer in Independence, Ohio, due to “an inability to emotionally function.”

Garmback has been suspended. As part of a civil settlement, the city of Cleveland agreed to pay $6 million to Rice’s relatives. In late 2020, the Justice Department announced that it had formally concluded its federal investigation into the police shooting of Rice.

The Justice Department announced the decision to close the case after conducting an “extensive examination of the facts in this tragic event,” but career prosecutors in the department concluded that, “the evidence is insufficient to prove beyond a reasonable doubt that Officer Loehmann willfully violated Tamir Rice’s constitutional rights.”

The federal investigation also looked into whether the officer and his partner had obstructed justice, and it concluded that there was nothing to pursue. Loehmann was hired as a part-time police officer in Bellaire, Ohio, shortly after being fired in Cleveland., Loehmann withdrew his application a few days later after officials faced backlash for hiring him.

Tioga Mayor. Wilcox told WEWS in Cleveland that Loehmann was one of three candidates considered for the job. “Everything came back clear that he didn’t have any bad remarks on his record at all,” he told the TV station. “That’s the way it was presented to the rest of the council and myself.”

However, when word spread that the officer who fatally shot Rice in 2014 had been hired in Tioga, dozens of residents protested on Wednesday about the decision. According to one protester, Loehmann’s hiring circumstances were “just wrong.”

“I think there was a lot of wrong information given and a lot of people didn’t know what they were doing,” the man told the newspaper. According to WEWS, Wilcox has promised not to schedule any hours for Loehmann until a resolution is reached. While Chandra is grateful that residents and leaders are outraged by the hiring, he says Loehmann’s reappearance hundreds of miles away in Pennsylvania has caused “great suffering to the Rice family all over again.”

“It’s difficult to imagine that the citizens of Tioga and surrounding communities will tolerate a law enforcement officer who represents such a grave risk to them,” Chandra said. “So my hope is that the officials will do what is right.”

Samaria Rice said she found out about Loehmann’s hiring just days before she plans to unveil a memorial for her son on the site of his shooting. She claimed that the officer finding work in Pennsylvania was his way of “taunting me and disrespecting me blatantly to my face.”

“Timothy Loehmann is just disrespecting me all around,” she said, saying that the last few years have left her “tired.” “There is no reconciliation there. As human beings and a God-fearing woman, I probably have to forgive him, but I will never forgive what he’s done to my family.”

“Timothy Loehmann is connected to Tamir Rice, and that’ll never change.” She added.

Nischelle Turner questioned Shaquille about his opinions on both scenarios during a recent episode of “The Big Podcast,”