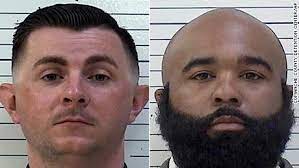 In Lawton, Oklahoma, two former police officers have been charged with the murder of Quadry sanders, an unarmed Black man.

An administrative investigation concluded; that both officers; did not adhere to the department’s “well-established training protocols, policies, practices, customs, or procedures.” The altercation; resulted in first-degree manslaughter of Quadry Sanders charges announced last week.

According to USA Today; former Lawton officers Robert Hinkle, 30; and Nathan Ronan, 29; have an Aug. 1 hearing; scheduled after District Attorney Kyle Cabelka charged them with the death of Quadry Sanders, 29.

On Friday, May 6; Cabelka made this announcement. “The Comanche County District Attorney’s Office has determined that the shooting of Quadry Sanders was not justified;” Cabelka said in a statement.

The Oklahoma State Bureau of Investigations conducted a months-long investigation into the slaying.

Cause Of the Death of Quadry Sanders

On December 5, 2021, Ronan and Hinkle responded to a 911 call from a female caller. Reporting that Sanders was waving a gun in someone’s house and refusing to leave.

The officers asked Sanders to leave the house. Instead of going out the front door, he went out the side door, according to authorities. He later returned to the property and approached the officers.

The officers shot and killed him. And then claimed that the three were in a “confrontation,” which prompted them to fire their weapons. The Oklahoma State Bureau of Investigation determined that the men’s actions justified their dismissal from the force.

Ronan also violated policy and procedures. The only difference is, that his strikes were for failing to perform “duties and responsibilities; justification to use deadly force, deadly force, mobile and body cam video/audio (not activating bodycam footage).”

Both officers violated LPD Rules and Regulations – Performance of Duty and the City of Lawton Municipal Code – City Code Violations.

Ronan and Hinkle’s behavior was; “not in accordance with the Lawton Police Department’s well-established training protocols; policies, practices, customs, or procedures.” According to Lawton City Manager Micheal Cleghorn

Cabelka announced the charges; following the release of video footage of the altercation. Furthermore, the video showed Sanders following the orders of the two former cops exactly. According to the video; Sanders was shot four times and then asked to put his hands up; officers continued to shoot him despite his obedience.

Sanders died from “multiple gunshot wounds,” according to the medical examiner. His body had a total of twelve gunshot wounds (abdomen, groin area, legs, arm, and hand).

The former officers’ bodycam audio shows them yelling at Sanders. Words like “stay down” and “roll over on your stomach. “Sanders said; “I’m down;” and “I can’t breathe;” There was no gun on Sanders

Sanders was shot at 15 times: 11 by Hinkle and four by Ronan; according to Cabelka’s office,

The officers were arrested after being fired from the department in January. And were released on a $25,000 bond on Friday. They both face a minimum of four years in state prison if convicted of Sanders’ death.

S. Lee Merritt represents Sanders’ family. He is unhappy with the charges and believes they should be upgraded.

“We demand murder charges,” he wrote on social media.

Merritt said the evidence reminded him of the deaths of George Floyd and Ahmaud Arbery. Both of whom he represented in court. “I placed this video on that level,” he explained.

Merritt later spoke up on Instagram; stating that he was unable to “find a single redeemable factor that mitigates any aspect of this shooting.”

“It was simply murder.” “There was no reason,” the caption continued. “These men must be brought to justice to the fullest extent of the law.”

KSWO reports: Merritt will continue to press the district attorney’s office to increase the charges to murder. Merritt intends to contact the Attorney General and the Department of Justice as well.

The Mayor also said a few words as well.

“As the Mayor of Lawton; the loss of life in our community is always a difficult matter to grasp.” Stan Booker said last week; My thoughts and prayers go out to the parents and those in our community who have lost a loved one in Quadry Sanders.”