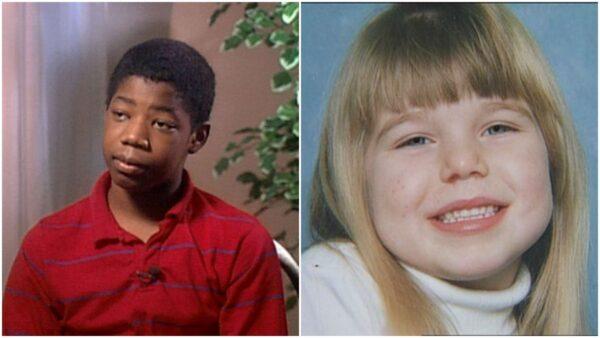 Local cops forced Anthony Harris to confess to orchestrating the death of his 5-year-old neighbor, Devan Duniver when he was a pre-teen boy more than 20 years ago.

Harris is speaking out as an adult for the first time about the psychological and emotional trauma he has endured as a result of his false conviction and coerced confession; which resulted in him serving two years in prison. Anthony Harris, a black 12-year-old, was identified as the prime suspect in the death of a white 5-year-old named Devan Duniver.

Duniver went missing from her apartment complex in New Philadelphia, Ohio, in the summer of 1998, according to PEOPLE. Around 2 p.m, Devan’s mother, Lori, approached 12-year-old Anthony Harris; a resident of the same building and offered him $5 to assist in her search saying, she couldn’t find her daughter.

Lori Duniver called the police shortly after 8 p.m. when she couldn’t find the girl. Searchers found Devan’s lifeless body in a nearby wooded area a day after she disappeared. They found her dead; stabbed in the neck seven times.

The Arrest of Anthony Harris

Law enforcement officers led by Captain Jeffrey Urban apprehended Harris. According to the report, police failed to focus their attention on a long list of suspects including the child’s mother; who had previously threatened to harm herself and the child. During the investigation, police dogs followed the scent of the little girl to the home of a convicted child molester.

The other suspects, according to People; were Duniver’s biological father, who reportedly had a history of domestic violence, and her brother who neighbors said was notoriously violent. Her mother’s boyfriend kidnapped her for three days; a year before her death. As a result, the Police forbade him from having any contact with the child.

According to reports, detectives ignored all leads and coerced Harris into confessing to Duniver’s murder. There was no physical evidence connecting him to the murder.

After two weeks and with public pressure mounting to solve the crime, Police asked Harris’s mother, Cynthia Harris, to come to the station with her son on July 15, 1998.

His Confession and Sentence

Unbeknownst to Anthony’s mother, Millersburg, Ohio, Police chief Tom Vaughn read the pre-teen’s Miranda rights and began “questioning him about the murder.” Under the officer’s pressure, Harris snapped and confessed to the murder.

When Vaughn asked Harris to write his confession, he asked to see his mother. According to his appeal, he changed his story after speaking with his mother; saying he didn’t kill the girl and only confessed because he was scared. Nonetheless, the courts accepted the confession. A juvenile court found harris guilty on March 17, 1999, and sentenced him to more than seven years in prison.

Harris spent two years in an Ohio juvenile detention center before his legal team filed an appeal, and a judge overturned his conviction on June 7, 2000.

The Ohio Court of Appeals released him “on the ground that the juvenile court had improperly denied a motion to suppress his confession; which was coerced in violation of his Fifth Amendment privilege against self-incrimination,” according to court documents.

“I did not kill Devan,” Harris told Quiñones while incarcerated at the age of 13.

Harris also revealed that he is still living in the shadow of the investigation in a new interview with ABC News anchor John Quiñones for the 20/20 program “Gone Before the Storm.”

Quiñones asked Harris why he confessed, and Harris replied that he just wanted to “go home.”

Harris said that the officers coerced him into telling them what they wanted in exchange for letting him go. “The detective basically told me that if I confessed to the crime, I could go home,” Harris recalled.

Despite having served two tours in the United States Marine Corps (Iraq and Afghanistan); Harris tells the veteran journalist that the offense has left him scarred.

However, serving his country could not fill the void left in his heart by his wrongful conviction and imprisonment. Especially since the case was never solved and Devan’s killer may still be at large.

At the age of 34, Harris is now a union ironworker.