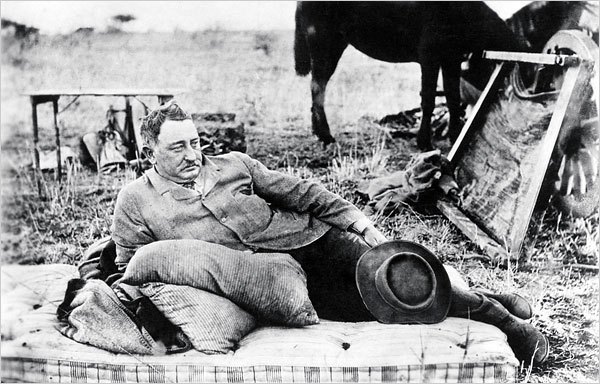 According to L.A.W, during the brutal scramble for Africa and Africa’s resources, at least two million Africans were killed in the scramble for ivory tusks for piano keys and billiard balls. At the time, the center of the ivory trade was Connecticut.

80% of the Nama and Herero peoples of Namibia were murdered in cold blood by the Germans. They were killed and forced to the desert where they were left to die in the desert without food, water or shelter.

Germany till date has never recognized this genocide or paid reparations even as they have paid billions in reparations to Israel for the Holocaust.

But Germany’s crime in Africa is not what we want to talk about here. 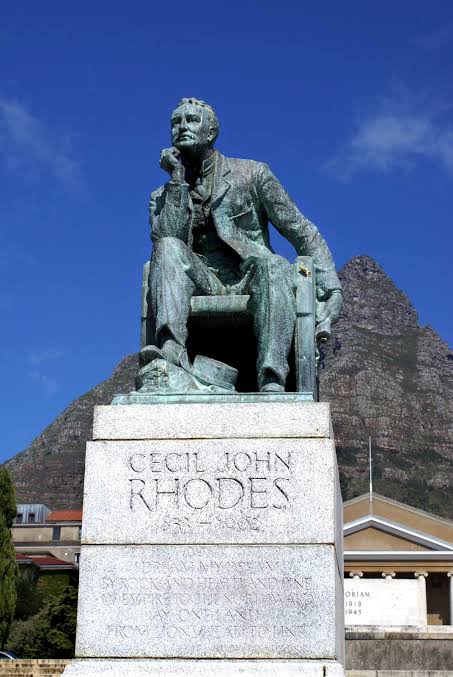 During this same time of Germany’s massacre in Namibia, the British colonizer Cecil Rhodes came to southern Africa. He believed so much in British imperialism and promoted it. He is credited for saying “to prevent civil war you must become an imperialist.”

Cecil Rhodes was a British man responsible for untold, unending devastation and violence in the region of South Africa.

His goal was to install British imperialism from Cape Town to Cairo and built the Cape-Cairo railway.

He is part of the legacy of white people who came from Europe and became wealthy from the theft of the gold and diamonds in Southern Africa.

Rhodes founded the popular DeBeers diamond cartel. He left Britain for South Africa when he was only but 18 years old. He took over the diamond mines at Kimberley South Africa and others in the area. By his early 20s, he was already a millionaire but he did not retire.

He made fortunes off the sweat of the indigenous nations and tribes of Southern Africa. At that young age, he believed in subjugating Africa for the benefit of England.

Maybe he was born with this kind of hate, or just like other Europeans, he had the hunger to see Africa blood flow.

He was the architect of apartheid in South Africa. Rhodes explicitly believed that the Anglo-Saxon race was a master race. This ideology drove him to not only steal approximately one million miles of South African land but also to facilitate the murder of hundreds of thousands of black South Africans. Many accounts actually number his victims in their millions.

He established the paramilitary private army, the British South-Africa Company’s Police (BSACP). That army was responsible for the systematic murder of ten to hundreds of thousands of the native people of present-day South Africa.

His hateful amendment of the Masters and Servants Act (1890)reintroduced conditions of torture for native and indigenous laborers. His monstrous racist “land grabs” set up a system in which the unlawful and illegitimate acquisition of land through armed force was routine for white people.

Cecil Rhodes despised democracy. In 1887 he told the House of Assembly in Cape Town: “The native is to be treated as a child and denied the franchise. We must adopt a system of despotism in our relations with the barbarians of South Africa.”

Now what kind of sadism and self-deceit could that be? You murder a people, take their lands, and then refer to them as barbarians. The conscience of the European colonizer will surprise you, when you view their atrocities throughout history, and how they kept reminding themselves that they were doing right.

His Franchise and Ballot Act of 1892 effectively eliminated the voting rights of African. On many occasions, he reminded his colleagues of the “extreme caution” they must use when it comes to “granting the franchise to colored people.”

Rhodes also went to Zimbabwe. He attacked and killed the Matabele and Shona; although they launched a fierce resistance which was led by their leader Lobengula.

Cecil Rhodes paid a mercenary army from England and supplied them with Maxim machine guns. With just 5 of these machine guns the English slaughtered more than 5,000 African people in one afternoon alone. After that, they celebrated with dinner and champagne.

Cecil Rhodes, gay lover, said he, “thoroughly enjoyed the outing.” He saw the slaughter of over 5,000 Africans as sport and adventure.

How noble!!! These were the same people who brought the gospel of peace and love to Africa, through missionaries.

The Chokwe, Shona, and Zulu people were among the indigenous tribes who led powerful struggles against the European invasions.

Cecil Rhodes was known to help set up the apartheid system in South Africa and the pass laws which were based on the Jim Crow laws of the United States. The pass laws, were mainly colonial taxation of African people to force them to work to be used as near slave labor in the diamond mines.

The Africans who worked in his diamond mines were forced to stay away from family and wife; in compounds with only cold tea and bread. These are much the same conditions you find today in the various mines in Africa. When Cecil Rhodes died the DeBeers diamond cartel was taken over by the Oppenheimer family.

The atrocities that took place in Sierra Leone and other West African nations were what DeBeers itself; has done to African people for a hundred years. The greed and gluttony of European governments and corporations for Africa’s resources have lasted from the days before colonization, till today.

His vision was part of the British empire’s vision, on which they boasted that; “the sun never set”because their empire went around the world. The then British empire included 77 countries including India and 15 nations in Africa. 458 million people were oppressed under this empire.

It is accounted that one-quarter of the world’s population at that time was under British colonialism. At that time England had one of the highest standards of living; which they achieved through near-starvation of the people in Africa, India, and the other colonies.

People like Cecil Rhodes should not be celebrated by the Europeans the way he is celebrated today; except the present generation are directly endorsing his atrocities in Africa.