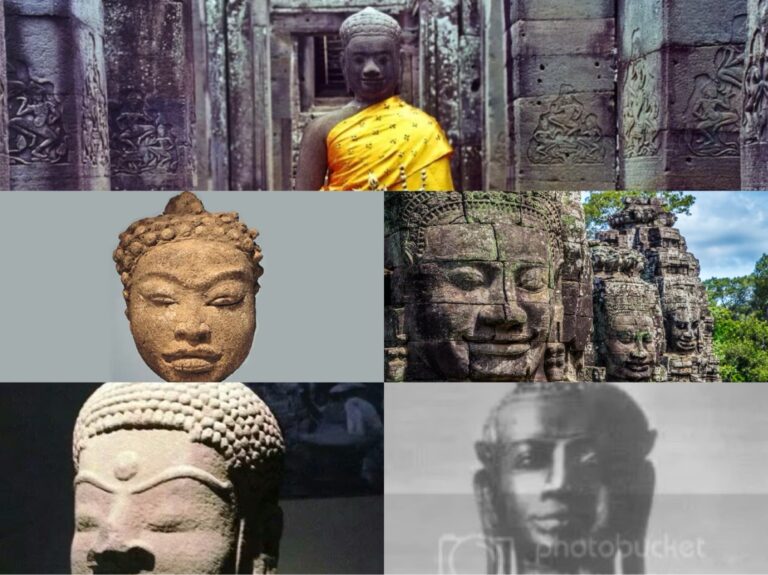 The original Buddha was unquestionably a man of African features, despite the fact that contemporary artwork and monuments depict him as a man with Asian or Indian features.

The book Black Gods by Supreme Understanding by Dr. Sujan Kumar Dass, is a fantastic resource for learning about the African roots of many Gods and old traditions around the world.

Here are the discoveries of the allusions to the first Buddha being a black man.

According to the British Historian, Godfrey Higgins in his book Anacalypsis (1836), Buddha came from the indigenous “negroes” of ancient India:

“The mountaineers [of India] most resemble Negroes in their countenances and their hair. The natives of the hilly districts of Bengal and Bahar can hardly be distinguished by their features from the modern Ethiopians. All this accords very well with my theory respecting the Black Buddha. It has been observed that the figures in all the old caves of India have the appearance of Negroes. This tends to prove not only the extreme antiquity of the caves but also the original Negro character of the natives.”

Additionally, In a book called Folk-Lore (1900) William Crooke provides more evidence that the Gods of ancient India are obviously of African or negroid origins.

“Now it has been often noticed that some of the forms of the Indian Buddha and other black Hindu gods are of a distinctively negroid type, representing the deity with thick lips, long hanging ear lobes, and black curly hair which cannot be referred to any existing Indian people…

Dr. Waddell describes the Lama of Tibet as a man with short curly hair, like the conventional images of Buddha; the courtiers depicted in the rock paintings of the Ajanta caves have fair or dark brown curly hair, while the attendants are black with curly negroid hair, and some are dwarfs; the images of the Jaina saint Guatama have crisp curly hair, thick lips and black skin. The enlargement of the ear lobe has also been noticed.”

The African Origins Of Modern Asians

Professor Jin Li of Fudan University Shanghai explains that; “An international study has found that the Chinese people originated not from Peking Man in northern China, but from early humans in East Africa who moved through South Asia to China some 100,000 years ago, Hong Kongs Ming Pao daily reported yesterday in a finding that confirms the single origin theory in anthropology…

According to the newspaper, a research team led by Jin Li (of Fudan University in Shanghai has found that modern humans evolved from a single origin, not multiple origins as some experts believe. In China, school textbooks teach that the Chinese race evolved from Peking Man, based on a theory that humans in Europe and Asia evolved from local species. But Jin and his fellow researchers found that early humans belonged to different species, of which only the East African species developed into modern humans. This new finding nullifies the theory that the ancestors of the Chinese people were Peking Man who lived in northern China 400,000 years ago.

Based on DNA analyses of 100,000 samples gathered from around the world, a number of human families evolved in East Africa some 150,000 years ago, said Li Hui, a member of Jins team. About 100,000 years ago, some of those humans began to leave Africa, with some people moving to China via South and Southeast Asia, Li said.”

A further statement from AmonHotep.com states that “people first migrated from East Africa around the regions of Ethiopia and Somalia to Yemen, Oman, Southern India, Burma, China, Malaysia, The Philippines, Indonesia, Papua New Guinea, Australia, The Solomon Islands and all the little islands in between.

After the last deep marine regression brought on by global cooling and the storage of water in continental glaciers, migrations and trade to the west by sea only began to decline some 11,000 years ago.”

There were also the northern migrations, which originated in Ethiopia and spread through the Saudi Arabian region, the Nile Valley, and the Sahara Desert.

Those who migrated by land mixed with other Africans who had already traveled by land and had undergone physiological changes.

Those who traveled by sea did it in one trip and arrived in foreign countries with their natural Black appearances.

The complex interactions between groups of people who evolved and continued to evolve while migrating out of Africa can be better understood by looking at migrations via land and sea routes.

Some populations arrived in China in their original form, whereas others underwent evolutionary change en route and seemed different from their ancestors when they first arrived.

Every person on earth is related to the original inhabitants of Africa, and DNA research as well as historical documents can demonstrate how people have migrated over time.

The African Origins of Buddha

The statues of Ancient Buddha were depicted as having wooly hair, which is generally depicted in corn rows or in a peppercorn style with little, tight curls in the statues.

The large nose, thick lips, and frizzy, nappy hair that are distinguishing Negro traits may be seen on the original Buddha statues, which also clearly depict him as being African.

He is depicted as jet Black in the majority of old temples in Asia where he is still revered.

Also, statues of the gods and goddesses in most ancient temples in Asia and India have African features and woolly hairstyles, some of them even have dreadlocks.

The world’s first missionary religion, Buddhism, was originally founded by Negroes who were the first to understand and adore the divine form of the Negroid mould of humanity.

The fundamental ideals of equality, liberty, and fraternity were originally preached by Buddha, an Enlightened Master of the Naga clan from the Sakya race.

He made the Nagas aware of the strength of their own minds rather than the mantra power.

In the region now known as the Middle East, Buddhism, whose teachings include the Golden Rule, was founded 500 years before Christianity (Africa).

Buddha is a title that means Enlightened One, Blessed One, or to Become aware and is not a name.

There have been numerous Buddhas who have been identified through the ages, including Siddhartha, Sakayanumi, and Gautama.

Buddhism was introduced to China, Japan, and other nations by black missionaries.

Therefore, it is evident that Buddhism did not originate in China or Japan, despite the fact that millions of adherents do so across Asia. The Negro God’s religion was widely practiced throughout Europe and even in the most remote regions of Britain during the reign of the Black King Ashoka. Buddhism actually originated in the Indian subcontinent, where the Indus Valley Civilization was founded by Black people who had moved from Ethiopia some 50,000 years ago.
The earliest human civilisation was founded by two distinct Black groups from Africa. The Dravidian had straight hair and an aquiline nose, while the Nubian had broad features and woolly, nappy hair; both were early descendants descended directly from Black people.

Black Africans ruled the world during the time of the Buddha, some 2,500 years ago (500 B.C.). However, about 500 years ago, the Aryans invaded Northern India, forcing the native inhabitants to seek refuge in the southern regions of India. The Rig Veda contains hymns that were actually prayers to white gods to defeat the Black people. These battles for supremacy in the Indus Valley between these savage white barbarians and the native Black people for control of the Black lands lasted for more than a thousand years.

These nomadic Ayans turned to corrupting and distorting the Ancient Texts written by the Black peoples to create a racist color caste as a last ditch effort to subjugate the Blacks because they were unable to completely defeat the Black Nagas due to their sophisticated war strategies. In a similar manner to how their European cousins subsequently suppressed the Black people through Christianity and Judaism, this perverted form of the Black religion (the varna system) secured their ascendancy while oppressing the Blacks. These white nomadic tribes that invaded India were actually civilized by Black people; but, like their Greek relatives, these whites systematically suppressed the Black people and obliterated their wonderful civilization.

While Eurocentric scholars find it hard to conceive the Buddha to have been of African extraction explaining away his knotted hair as being dead snails who sacrificed themselves to help the Buddha attain alignment, other historians and scholars beg to differ.

According to the ‘Snail Martyrs story’ on northcoastgardening.com: “Buddha was on a walk and began thinking very deeply. He came to a tree and sat down in its shade to continue his meditation. Hours passed, and the Buddha became so immersed in thought that he didn’t notice the sun moving across the sky. The sun beat down on his bare head, and still he sat thinking.

A snail was making its way along the ground, and he noticed the Buddha sitting there, thinking important thoughts. Snails are tough creatures, but they are made of moisture, and have to be very careful of drying out, so the snail saw right away that the Buddha’s head was soon going to become a painful distraction to his great thoughts.

As fast as it could, the snail made its way up the Buddha’s robe to his head, and sat there, with his mucous-y body cooling the Buddha’s smooth, bare skin. Other snails noticed and followed the first one, covering Buddha’s head in a neat cap of spiral shells and cool, damp bodies.

Hours passed, and the snails became parched and dry. When evening fell and Buddha stood, noticing his surroundings once more, he found he was wearing 108 snails, all of whom had given their lives to further Buddha’s path to enlightenment.

These snails are now honored as martyrs and are shown on many statues of the Buddha to remind us of their sacrifice.

Although this view is held by a good number of people of the Eurasian stock, however, those of the African stock find it to be a farfetched theory. Historical accounts point that Buddha is of African origin.