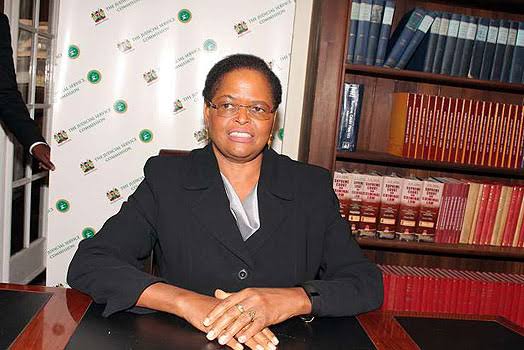 Kenya is poised to elect its first woman into the illustrious role of Chief Justice, as Lady Justice Martha Karambu Koome; has emerged as the top candidate out of ten candidates on the Judicial Service Commission’s (JSC) 2021 list. The decision is reported to have been unanimous.

However, Justice Martha Koome’s nomination  was not without contestation. Ngatia, one of the candidates, has disputed the nomination arguing that; the JSC manipulated his scores, according to reports by Business Daily Africa.

But, on Tuesday the JSC released a statement denying the allegations. “The JSC has run an open, transparent and competitive recruitment process that; has witnessed the participation of the public and key stakeholders,”; the statement read.

Known as the voice for women, Justice Koome stipulated that one of her top priorities was to reduce the backlog of cases. This, she plans to do by “reducing the backlog of cases through facilitating the appointment of additional judges and magistrates, operationalising the Judiciary Fund to promote its independence, promoting the use of technology as well as to building additional courts,” reports Nation Africa.

Should the lady justice’s appointment be successful, Justice Koome will join; a small but growing league of women Chief Justices on the African Continent including those from Sudan, Ethiopia, Zambia, Lesotho and Seychelles.